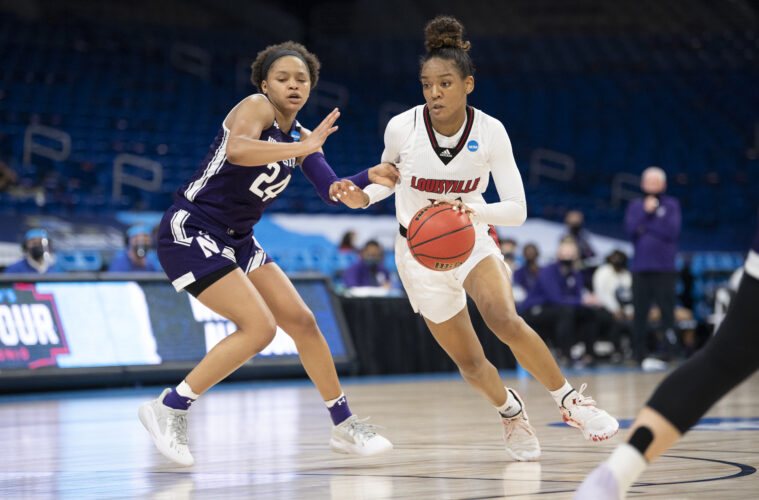 No.2 Louisville Heading To The Sweet Sixteen After Win Over Northwestern

Coming off a 31-point win against Marist in the first round, the Cards were set to face a Northwestern team that came out hot and refused to go down without a fight.

Things were off to a slow start for Louisville, who found themselves down 13-2 at the first timeout and they were just 1-7 from the field. The entire first quarter was a nightmare of Louisville looking lost in the zone and none of their shots falling, while Northwestern couldn’t miss a shot. The Cards had four turnovers in the first quarter and Hailey Van Lith picked up two fouls early, putting her on the bench. Things were off to a nightmare of a start and the Wildcats had a 15-point lead over Louisville at the end of the first quarter. After some adjustments in the second quarter, Louisville was able to go on a 9-0 run to cut the Northwestern lead to just 9 points. Things still weren’t looking great for Louisville, who had 8 turnovers and 7 field goals with under four minutes left to play in the half. By the time we heard the halftime buzzer, Louisville had racked up 11 turnovers, they were 5-15 on layups, shooting 28.1% from the field, and Hailey Van Lith and Dana Evans had two fouls each. The Cards had 20 points on the board, which was a new season low, and they were trailing by 12.

The lack of focus carried over into the second half and the Cards continued having trouble finding their footing. With less than four minutes to play in the third quarter, they finally began to find some momentum behind Kianna Smith who led the team in scoring during the quarter with 8 points. Louisville was shooting 50% through the third period adding 20 points to their total and grabbing more rebounds. A 12-0 run would have them tied with Northwestern going into the fourth quarter. The Cards would get their first lead of the game in the fourth quarter and never looked back. They were able to hold onto their lead through tough play and teamwork. Louisville was shooting 45.5% through the last ten minutes of play and added 10 more rebounds to their stat line for the night. The Cards were able to come away with a 62-53 victory after being behind by 18 points earlier in the game. This comeback is tied for the third largest deficit overcome in Women’s D1 NCAA Tournament history. Olivia Cochran finished her day with an impressive double-double, 13 points and 15 rebounds. Kianna Smith led the team in scoring with 16 points and had 6 rebounds and 2 assists.

Dana Evans stated in the post-game interview that the team was able to settle down and find their open teammates in the third quarter, as well as making crisp passes. She stated that she knew she needed to stay positive for her team when they were down by 18. When asked about the locker room during halftime, Dana said that Coach Walz stayed calm, and they figured out what changes they needed to make. She said that her ability to stay calm comes with age, it’s something she knows she needs to do to keep her teammates from worrying. Evans said Olivia impacted the game through her rebounding and she was able to find open shooters. She went on to say they count on and depend on Olivia every game.

Coach Walz said the first thing he’s going to do is change his pre-game speech because the last two sucked. He went on to say that you have to give Northwestern a ton of credit. He said they were physically beat in the first quarter and Northwestern was a lot tougher, so they had to adjust the way they were playing. When asked about the difference in play during the third quarter, Coach Walz said he told the team that it helps when they throw the ball to their own team. He said he thought Olivia was fantastic today. She missed some shots, but she stepped up and made some big free throws for the team. Coach Walz also noted that he can’t say enough about Mykasa Robinson. He said he called her parents after a game earlier in the season to let them know how much of a joy she is. He stated how she doesn’t care if she scores, and she knows what her strengths are. Her big play today was nothing but heart and guts.

The Cards will face No. 6 Oregon this Sunday at 7:00est on ESPN.