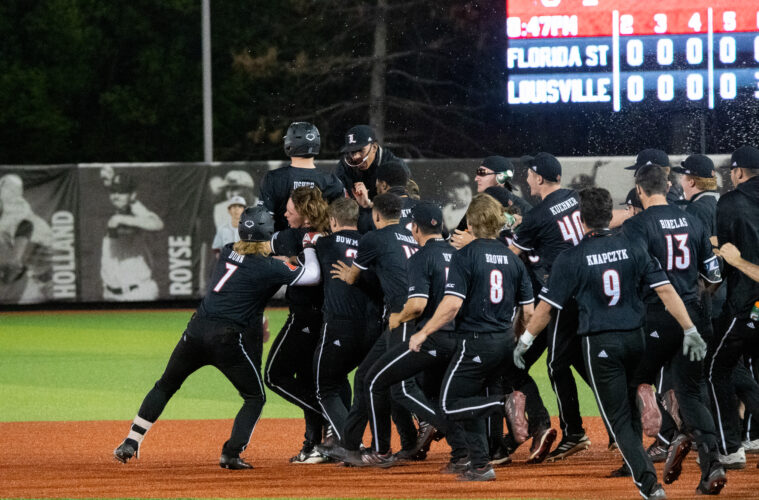 No. 5 Louisville Gets Series Win Against No. 17 FSU In Rubber Match

It was an eventful weekend at Jim Patterson Stadium as No. 5Louisville hosted No. 17 Florida State that came down to a Sunday afternoon rubber match.

Friday night ended in excitement when the Cards took game one after walking off the Seminoles 4-3 in 10 innings. Michael Kirian showed his dominance again when he faced minimum batters through the first four innings and kept Florida State scoreless through the first six innings and striking out 10. The Cards were doing what they needed to do on defense but kept coming up short on offense as they stayed scoreless through the first five innings. During the sixth inning Knapvzyk and Binelas were able to get something on the board for Louisville, giving them a 3-0 advantage. An RBI double and two-run home run from Florida State in the seventh inning would tie things up and leave the Cards with some work to do. The game stayed tied at 3 a piece before going into extra innings where Levi Usher singled home Christian Knapczyk giving the Cards a 4-3 victory. Adam Elliot picked up his fifth win of the season with three scoreless innings.

Louisville lost game two, 8-5 after Florida State scored five runs in the eighth inning. The Cards had a 4-3 advantage going into the eighth inning but would give up 5 runs to help the Seminoles secure their win. Alex Binelas recorded his first career grand slam in the bottom of the fifth when he sent one out of the park through right-centerfield. He would have two home runs by the end of the night making it his third career multi-homer game.

The Cards were able to close out the series with an 11-4 win on Sunday afternoon. Trey Leonard got things started in the second inning when he would get his third homerun of the season and Cooper Bowman added a run to the scoreboard in the third inning. Florida State found themselves two runs ahead in the sixth inning, but Louisville would go on to score 9 unanswered runs and win the game. The Cards faced five different FSU pitchers in the seventh inning where they scored 7 of their final 9 runs. Louisville totaled 13 runs for the day with multi-hit games from Trey Leonard, Alex Binelas, Dalton Rushing, and Luke Brown.

The No. 5 Cardinals will travel to Virginia for a three-game weekend series that is scheduled to begin on Friday, April 16th at 6p.m. ET.