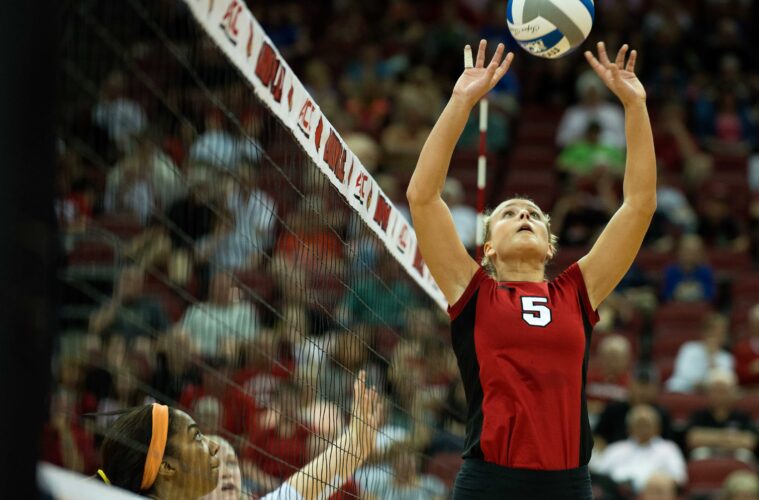 No.15 University of Louisville volleyball team drew Belmont and will host NCAA First/Second Rounds at Cardinal Arena on campus this Friday (December 4) & Saturday (December 5th).  The Cards will face the winner of the Illinois/Southern Illinois match should they advance.

The Cards are making their 25th NCAA appearances and have 27 straight winning seasons, 19 conference championships and have been in NCAAs 24 of last 26 years. Louisville is one of only 14 schools to make 25 or more appearances in the NCAA Tournament since it started in 1981.

“We could not be more excited about being at home,” said Anne Kordes, UofL head coach. “We set up goals for ourselves for the season. We knew that winning the ACC title and getting the opportunity to host would go hand in hand. We feel blessed to be in this position and all the credit goes to the girls. Now we have a lot of work to do.  We played Belmont in the tournament a couple of years ago.  They are a scrappy team that plays great defense.  They run a quick offense.  We are not looking past them at all.”

Belmont (17-14, 11-5 OVC) defeated top-seeded Murray State in four sets (20-25, 25-18, 25-19, 25-15) to claim the 2015 OVC Volleyball Championship and automatic bid to the 2015 NCAA Volleyball Championship. The Bruins won nine out of 11 sets over Morehead State, Tennessee Tech and the host Racers to claim the conference crown. Belmont is making its fourth NCAA Tournament appearance, second representing the OVC (2006, 2008 – Atlantic Sun; 2012, 2015 – OVC). The Bruins are led by sophomore Arianna Person, who was named Tournament Most Valuable Player, while teammates Emma Price and Jocelyn Youngdahl were named to the OVC All-Tournament Team.

“We are excited to be hosting and we were not sure that was going to be possible after dropping our match to Syracuse on Friday,” said ACC Player of the Year Katie George. “So we are thrilled.  We just hope we use this opportunity to make it to Des Moines for the Sweet Sixteen. We need a ton of fans to comeout and make it an intimidating place to play.”

On the other side of the bracket are the Illini, a team the Cards faced in the Illini Classic earlier this season.  The Cards fell in three but took the Illini down to the wire in each set before falling 27-25, 25-23, 26-24.  The No. 18 Fighting Illini fell to Michigan, 3-1 (25-23, 22-25, 25-27, 20-25), in the regular-season Big Ten finale Nov. 27 in Cliff Keen Arena. The Illini finished their regular-season at 19-12 and 10-10 in the Big Ten.  The Illini face Southern Illinois in the first round. The Saluki volleyball team concluded its run at the MVC Volleyball Tournament in the semifinal round on Friday night with a 3-0 loss to the No. 3 seed Missouri State Bears. The match saw 11 ties, resulting in 25-22, 25-19 and 25-20 sets. This is the second consecutive year the Salukis have been eliminated from the tournament by Missouri State.

Tickets requests are now being accepted from Louisville Volleyball season-ticket holders.  To request tickets, please log in to your My Cardinals Account . Select the number of tickets you would like to request for each day. The maximum number of tickets that can be requested per day is six. Reserved seating tickets are $20 per day.  Credit cards will only be charged if you are allocated tickets, based on Cardinal Athletic Fund priority point level.

If there are any remaining tickets, they will go on sale beginning at noon on Tuesday, Dec. 1.  A limited number of standing room only tickets and any other reserved seats will be sold on game days.  If you have questions, please contact the Athletic Ticket Office, startingtomorrow at 9:00 AM via email at tickets@gocards.com or by phone at 502GOCARDS.

Louisville earned the ACC’s automatic qualification to the 2015 NCAA Volleyball Championship after a breakout second season in the ACC. The Cardinals are led by ACC Player and Setter of the Year Katie George and Defensive Player and Freshman of the Year Molly Sauer, who helped the Cardinals go undefeated at home in conference play.

ACC Coach of the Year Anne Kordes led Louisville to its best regular-season record since the Cardinals went 29-3 during the 2012 campaign.