The pairings and game times have been set for the 2015 Atlantic Coast Conference Baseball Championship with top-seeded Louisville opening pool play on Wednesday night at Durham Bulls Athletic Park in Durham, North Carolina.

Louisville will begin its week on Wednesday at 7 p.m., ET against the winner of Tuesday afternoon’s North Carolina-Virginia Tech play-in game. The Cardinals will continue pool play on Thursday at 3 p.m., against Clemson. Following an off day from championship play on Friday, Louisville will conclude its Pool A schedule on Saturday at 11 a.m., against Florida State. All of the Cardinals’ 2015 postseason games will be aired on 93.9 The Ville.

Under the pool-play format, each team will play one game against each of the other three opponents in its pool Wednesday throughSaturday (May 20-23). The two teams with the best records within their respective pools will advance to the title game on Sunday, May 24, with the winner earning the ACC’s automatic berth into the NCAA Tournament.

Fans can still purchase tickets to next week’s championship. Complete books to all 15 games are available, as well as individual game tickets that can be purchased by calling 919-956-BULL or visiting http://theacc.co/BASE15tix.

All 15 games of this year’s ACC Baseball Championship will be televised for the ninth straight year. Regional Sports Networks from across the conference footprint and across the nation will carry all 14 games on Tuesday through Saturday. Sunday’s championship game will televised nationally by ESPN2 at 1 p.m. All games will also be available on ESPN3 or WatchESPN. In addition, all 15 games will be broadcast via satellite radio on Sirius 218/XM 193.

The inaugural ACC Baseball Championship FanFest presented by Quintiles will be held just outside Durham Bulls Athletic Park on Friday, May 22, from 2 to 7 p.m., and Saturday, May 23, from 10 a.m. to 7 p.m. The free event, held on Blackwell Street, will serve as the official pregame destination for fans and will feature attractions from the ACC Corporate Champions, live entertainment, free face painting, official championship merchandise, food trucks, and fun for the entire family. 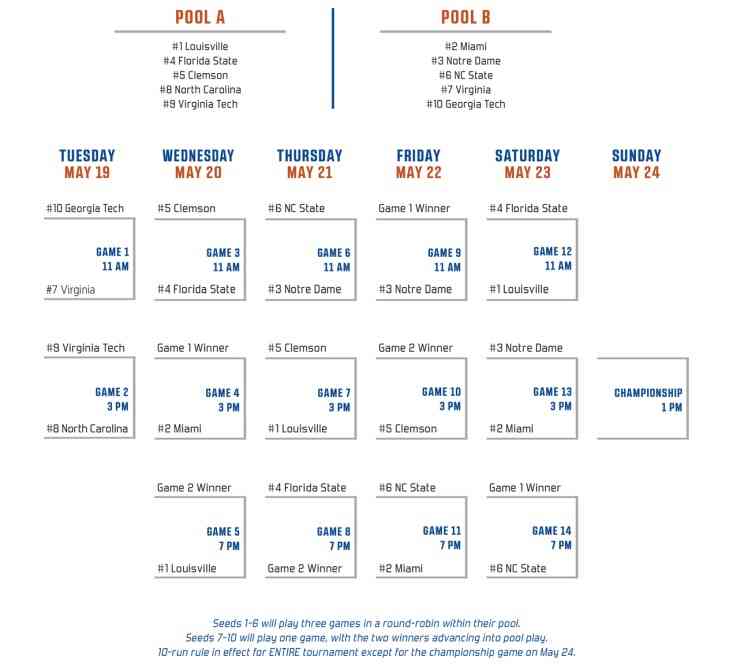