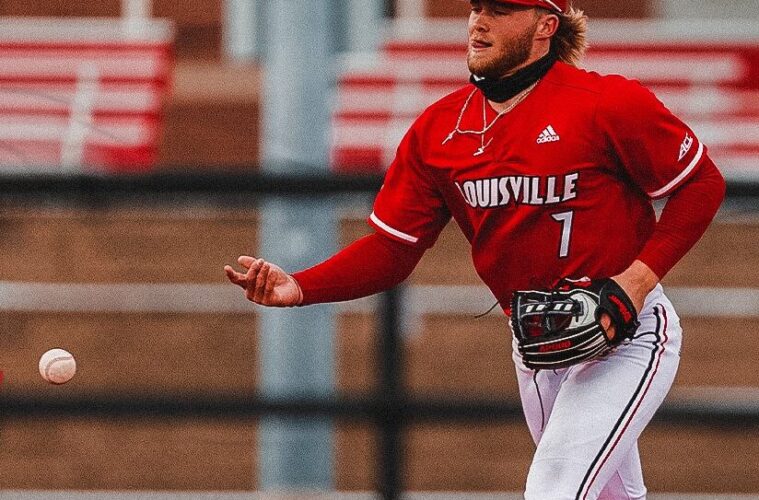 The Cards played their rubber match game this afternoon at Georgia Tech and found themselves with their first serries loss of the season.

Things were off to a good start for Louisville in the first inning today when Cooper Bowman hit a leadoff homerun. They would get nothing else in the first, but the ball was carrying so things were already improved from Saturday’s game that ended in a devastating loss. Luke Smith got off to a tough start in the bottom of the first. He gave up 2 hits and 1 run while also walking 2 of the 6 batters he faced. Lucas Dunn was able to leadoff with a single in the top of the second inning, but Borden would come up short with a fly out to centerfield. Knapczyk added an RBI double to his stat line sending Lucas Dunn home and putting Louisville back in the lead, 2-1. Luke Smith was able to retire the first two batters he faced in the bottom of the second inning before a HBP sent Jenkins to first. Waddell had an RBI double that would tie up the game again in the bottom of the second.

The top of the third inning passed by quickly for Louisville. Brown singled to left center, but Henry Davis struck out swinging and Masterman and Binelas both had a fly out leaving Brown stranded. The bottom of the third opened things up for Georgia Tech some when Luke Smith gave up back-to-back home runs and walked the next two batters before seeing his day come to an end. He finished with 2.1IP, 5 hits, and 4 runs giving him a 4.76 ERA for the day. Prosecky took his place on the mound and was able to get the Cards out of the inning without giving up any more runs. The fourth inning had a similar feel to it as Dunn had a lead off single followed by Borden and Knapczyk grounding out and Payton flied out. Prosecky was back on the mound for the bottom of the fourth and would give up 3 hits and 3 runs, making it a 7-2 game.

Louisville finally found some luck in the top of the fifth inning with back-to-back singles from Bowman and Brown. An RBI single from Masterman would send Bowman home and advance Brown to second base. Both runners would advance on a balk during Binelas’ at bat before he struck out. Dunn had a 2 RBI single to help put Louisville within striking distance of Georgia Tech. Unfortunately, the Yellow Jackets answered loudly in the bottom of the fifth. Prosecky gave up 2 runs and 3 hits before seeing his day come to an end. He had 2.2 IP, 6 hits, and 5 runs giving him an 8.53 ERA. The Cards were able to tally 4 hits in the top of the sixth inning and add another 2 runs to their total. Knapczyk was able to make it across home plate on a throwing error after Brown lined out to third and Henry Davis hit an RBI double to send Bowman home. Jack Perkins stepped to the mound for Louisville in the bottom of the sixth giving up just 1 hit and 1 run.

Going into the seventh, Georgia Tech was leading Louisville 10-7, and this inning would go by as quick as your vacation in the summer. Both teams would go three up, three down and Louisville was running out of opportunities to make a comeback in this game. A wild pitch in the top of the eighth inning sent Dalton Rushing home for Louisville and put Bowman on third base with two outs, but Georgia Tech’s Maxwell was able to get Masterman to strike out while swinging. Louisville found themselves behind two runs going into the bottom of the eighth and needed to take advantage of everything they could at this point. Gonzalez would have a squeeze bunt sending a runner home for Georgia Tech and they still have two runners on base with two outs. A two-run double from the next batter suddenly had the Yellow Jackets ahead, 13-8. In the top of the ninth, Binelas led off with a double to centerfield followed by a double from Dunn to advance Binelas to third. Louisville had two runners in scoring position with no outs on the board. Levi Usher struck out looking but it was followed by Knapczyk drawing a walk to give Louisville bases loaded with just one out. Dalton Rushing grounded out to first but sent Binelas home and Bowman popped up to the shortstop to end the game for the Cards. Louisville would lose the series 2-1.

The Cards come home for a midweek game against Murray State this Tuesday and will host Boston College for a weekend series set to begin on Friday.