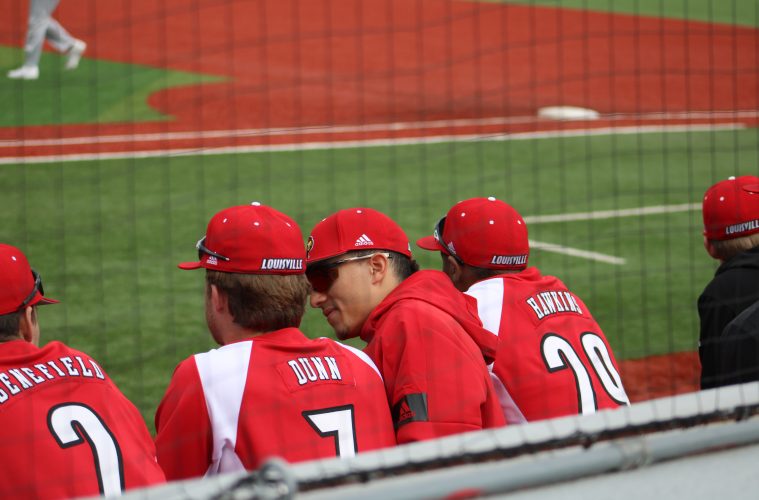 Louisville spent the weekend on the road at Wake Forest for their first ACC series of the season. It came with some good, some bad, and some big booms from the offense as well as the defense. After Sunday’s 16-4 victory, the Cards moved to 2-1 in conference play and 11-4 overall. This series win also marks the sixth opening ACC series win for the Cardinal Nine.

Filthy, disgusting, sick, insane. All words used to describe Reid Detmers performance on Friday night as he helped lead the Cards to a 4-1 victory over the Demon Deacons. Through six innings pitched Detmers struck out fifteen of the batters he faced. To say he brought the heat would be an understatement. Reid was throwing curve balls that caught the attention of people nationwide Friday night. Adam Elliott and Michael Kirian would go on to strike out three more batters before the end of the night. Despite the Cards leaving a total of 9 runners stranded throughout the game, they still recorded a total of seven hits and three RBI. While it wasn’t their best offensive performance, Louisville still came away with the win on Friday night.

Saturday came around and Louisville was going into the afternoon with momentum. Little did we know, this momentum would come to a screeching halt in the form of a heartbreaking loss. To be quite honest, not much was happening until late in this game. Bobby Miller was able to hold the Demon Deacons hitless through 5.1 innings before giving up a two-run homer in the sixth. With the Cards down by one in the eight inning, Evan Webster was able to get out of a bases loaded situation. Unfortunately after Louisville tied the game in the ninth, Webster would be handed the loss when he gave up a walk off homer that would snap a nine game winning streak for the Cards.

Following a day of struggling offense, the Cardinal Nine were looking to bounce back on Sunday and they did so in typical Louisville fashion with a 16-4 victory to clinch the series. The bats were busy early and often as the Cards scored in six of nine innings played. Louisville exploded on offense during the rubber match recording 18 hits and 15 RBI through 42 AB. Luke Smith would also tally five strikeouts against the Demon Deacons through 6.1 innings pitched and RHP Glenn Albanese would strikeout just as many in 2.2 innings. Jared Poland would see his first two-run homer of the season while Henry Davis recorded his second home run of the year. All nine starters recorded at least one hit Sunday afternoon, with a total of 13 different players getting a hit.

Louisville will host a two-game midweek series against Chicago State scheduled for Tuesday at 3 p.m. and Wednesday at 12 p.m..Both games can be streamed on ACC Network Extra or you can listen on 1450 WXVX.