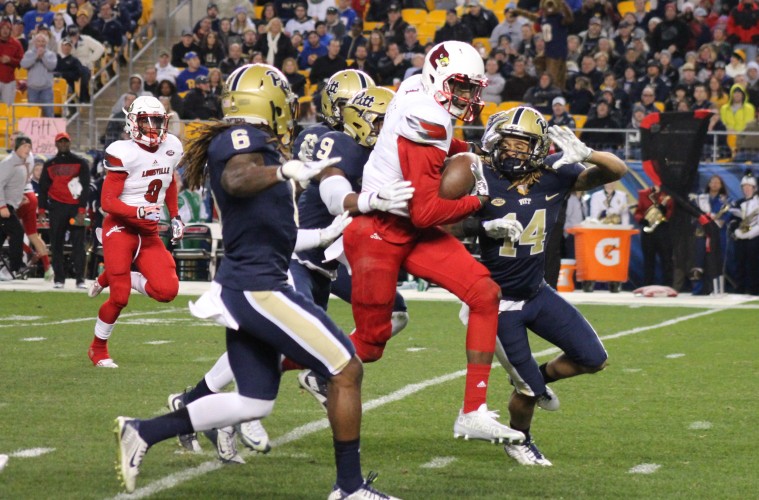 ** The offensive MVP has to go to Jamari Staples. 9 receptions, 194 yards, and a touchdown despite leaving the game with an injury. He played the best game a wide receiver has played since the departure of Devante Parker. It will be very important to have Staples back against UK as he is the best threat we have at wide receiver.

** Defensive MVP goes to the entire defense for their second half effort. With their backs against the wall this defense came out of the locker room and gave this team a chance to make a second half comeback.

** I think the first thing that needs to be addressed is the defense. The defense from the second half of the Florida State game appeared again today. Missed tackles, blown coverages, and just an overall lack of physicality put Louisville behind quickly. I am not sure why this issue came up again. I was fairly assured that after the Florida State game we would never see that lack of physicality again. As good as the defense played in the second half, it is a problem when the defense comes out as unprepared as they did. Not only did the front 7 allow Pittsburgh to run the ball down their throats, but the safeties were repeatedly out of position and gave up multiple touchdowns.

** Another aspect of the defense that has been notably lacking all year is the secondary’s ability to remain in coverage even when the play is breaking down. This has hurt Louisville all year and I feel it has something to do with discipline. After a couple seconds in the pocket, if the pass rush cannot put any pressure on the quarterback there seems to be a receiver downfield completely uncovered that results in a large gain.

** Yet another week, and another quarterback discussion. Bolin started the game and not only turned the ball over toward the end of the first half, but could not establish one of the advantages he has over Jackson, an efficient run game. Jackson gave Louisville a spark at the end of the first half and did lead Louisville on several scoring drives in the second. Despite these scoring drives Jackson was definitely not perfect. Both quarterbacks took too many sacks, plain and simple. Jackson was not able to use his running ability to evade the rush and Bolin held the ball entirely too long. Combining these with the offensive line not providing the world’s best pass protection and the result is a mediocre day for Louisville’s quarterbacks. The good part of this? The Louisville offense still managed to score 34 points.

** I think the worst part of this game was the fact that I believe the team took a step back. Yes, Louisville had a chance at the end to make it a game but the way they started the game just isn’t in the recipe of winning the ACC and making the college football playoff.

** Going forward: Who will be the starting quarterback? I have no answer to this question. I feel like Jackson has the highest upside but Bolin generally manages the game better (where have we heard that before?). The run game usually is more successful than the read option offense. Bolin’s best game comes when they can establish a solid run game and Jackson’s best is when he spreads the defense out and uses his legs and strong arm to make plays. If I had to guess I think you will see Bolin start at Kentucky with Jackson coming in occasionally to mix it up. I believe Petrino has faith he can dominate the line of scrimmage on offense against a subpar Kentucky defense and therefore will let the run game try to take control of the game.

** Potentially the best part about the Pittsburgh game? It brought this team down to earth and made them realize they can’t just walk into a game and come out with a win. They will have to fight for every touchdown and every yard and I believe they will do just that against Kentucky. If you are a Kentucky fan, I would think you would have wanted Louisville to beat Pittsburgh because with Petrino at the helm, this team should have a very aggressive attitude heading into Saturday’s rivalry showdown. With this aggressiveness and something to prove, I feel Louisville will close the season out 7-5 with a win against Kentucky. Early prediction? 35-14 Cards.