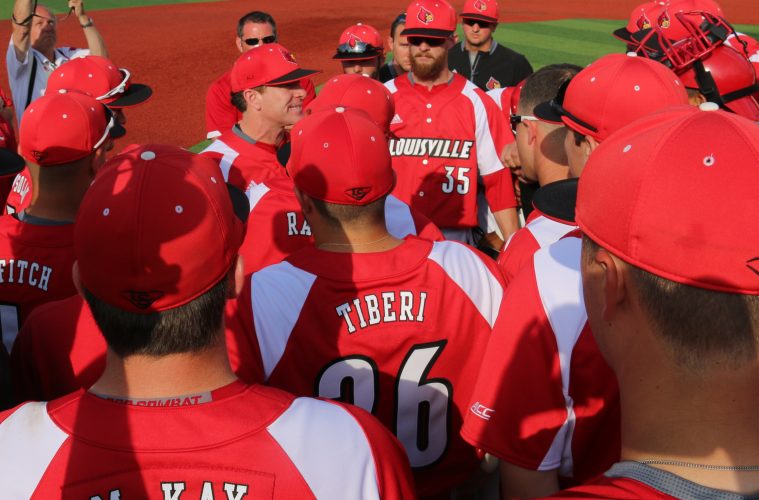 With the win, their 22nd consecutive at home, the Cardinals (50-12) clinched their sixth NCAA Super Regional berth and fourth 50-win season in the last 10 years. Louisville, which owns the nation’s longest active NCAA Regional winning streak at 12 games, will host the winner of the Nashville Regional in the best-of-three NCAA Super Regional starting either Friday or Saturdayat Patterson Stadium. Having already set a school record for home wins in a season, the Cardinals improved to 36-1 at Patterson Stadium this season and are 22-6 all-time in NCAA postseason games at the corner of Third and Central.

Harrington, the 2016 ACC Pitcher of the Year, twirled 7.1 shutout innings scattering five hits and two walks while striking out five to improve to 12-2 on the season and 9-0 at home.Sunday’s outing marked the 13th time in 16 starts this season the junior from Elizabethtown, Kentucky has allowed two or fewer earned runs. Harrington lowered his season ERA to 2.08 while becoming Louisville’s third 12-game winner this season.

Solak, a junior from Woodridge, Illinois, was 3-for-4 at the plate connecting for his fifth home run of the season and accounting for all three runs for the Cardinals. The All-ACC second baseman was among eight Louisville players named to the NCAA All-Regional Team, including sophomore Brendan McKay, who was chosen by the media as the Most Outstanding Player of the Louisville Regional. Junior Will Smith was named to the All-Regional Team and had a three-hit performance on Sunday finishing 3-for-5 with a run scored as Louisville out-hit Wright State (46-17) 10-7 overall.

On the mound, junior righthander Zack Burdi closed out the recording the final five outs of the game while allowing one run on two hits for his 11th save of the season and the 20th of his collegiate career. The Cardinals finished the three-game regional with a 1.33 ERA and 27 strikeouts in 27 innings pitched. The starting trio of senior Kyle Funkhouser, McKay and Harrington allowed just one earned run on 12 hits with 21 strikeouts in 21.0 innings while accounting for all three wins.

The Cardinals struck first on Sunday when Solak connected for a two-run homer off Wright State righty Trevor Swaney in the fourth inning. After a leadoff single by Smith, Solak sent the first pitch of his at-bat over the left field wall for the 2-0 lead. It was the 10th career home run and the third NCAA postseason home run for Solak.

Louisville increased the lead to 3-0 in the fifth inning when junior Logan Taylor scored on a two-out RBI single from Solak. After being hit by a pitch with one out, Taylor moved to second on a single by Smith before Solak sent him home with a single through the left side. The Raiders plated their only run of the game in the ninth inning on a RBI single to right center by Gabe Snyder.

The dates, times and television assignments for Louisville’s NCAA Super Regional games are expected to be announced on Monday night.

Reserved chairback seats may become available later next week should Louisville’s opponent return a portion of its allotment. Game times and additional ticket information will be announced following the completion of NCAA Regional action across the country.