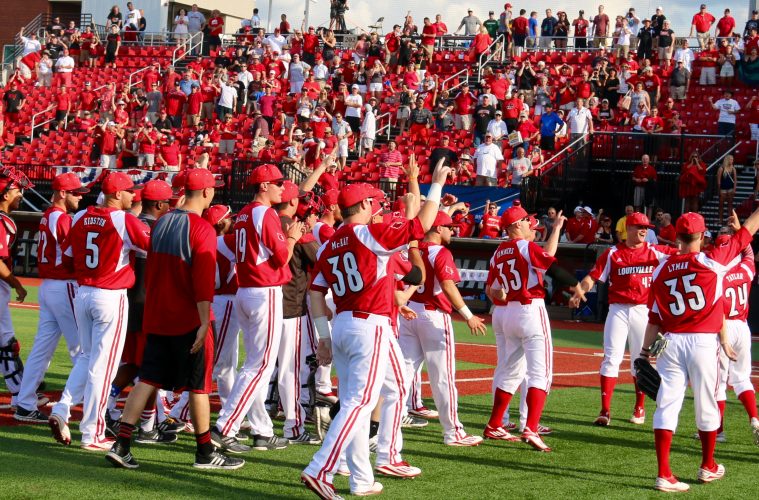 So What? Now What?

1st Round Pick, Stopper of the Year Finalist & 100+ MPH throwing Zack Burdi on the hill.  A 3-0 lead with 1 out in the 9th…….the situation was perfect.  A few moments later the season was over.

“So What?  Now What?” is the mantra of Louisville Baseball.  Bad things happen during a season, a series, a game, an inning, an at bat anything can go wrong.

As the ball went over the right field wall off the bat of seldom used freshman Sam Cohen (just 26 At Bats prior to this one) there were a few moments of devastation.  The season was over. Burdi had his face in his jersey as Will Smith came to hug him.   UC Santa Barbara rightfully celebrated in dogpile Omaha fashion….. but there was a moment of disbelief & reconciliation of what had just occurred from both the Gauchos & the Cards…… and the reactions were widely different.

When you stop & think about what UC Santa Barbara pulled off….  36-1 at home, Louisville’s roster top to bottom filled with valuable draft picks.  SAM COHEN OFF ZACK BURDI?  The Gauchos 1st ever trip to Omaha?   The impossible happened….and that’s just sports.  That’s why we love the games, and occasionally these things happen to (or for) your side.

There wasn’t another at bat or out to get.  The season was over.  “So What? Now What?”……. the Louisville Baseball team went and hugged each other.  Dan McDonnell told Zack Burdi that he loved him.  Moments after with another team celebrating a trip to Omaha on its field the Cardinals huddled with their arms around one another….and then went and signed autographs for kids.

“So What? Now What?”  Tip your cap and set the example.  The Cards were clearly upset with the loss having a legitimate roster worthy of pursuing a national championship.  But UofL was complimentary to the Gauchos and made time for its fans…..like always.

That example may have immediately paid off when young Colby Berson was able to track down Sam Cohen’s Grand Slam Walk Off Super Regional Winning Home Run Ball….. and sought a way to return the ball to Sam Cohen & the UC-Santa Barbara program.  Berson & UCSB will meet today at the Gauchos team hotel in downtown Louisville.

Louisville Baseball may have had its season ended in improbable fashion.  But the trajectory of the program, its success on the field, in recruiting & in the draft are remarkable considering the state of Cardinal Baseball prior to Dan McDonnell’s arrival.  Louisville is going to lose a lot of talent between now & next season to professional baseball.

But So What?  Louisville Baseball has a foundation that is beyond one game, one series or one season.  Now What?  Stay the course.  One fine morning Louisville Baseball will wake up as National Champions and we’ll look back at last season’s foul pole home run vs. Fullerton or this season’s improbable walk-off to Santa Barbara and Cardinal fans everywhere recount the memories, the ride, and the work that it took to achieve a dream that most thought was impossible.  “So What?  Now What?”

“Everybody in life suffers a loss.  It’s the one who can overcome the loss & make a success of himself that is really doing something.”  – Muhammad Ali