The countdown to the 2016 college football season has started, but before we start getting too caught up in the promising upcoming season let’s take a look at some stats from the past few years. All stats are courtesy of www.footballoutsiders.com. Italicized text is taken directly from the site as a reference to better describe the metrics.

Note: A couple things to take a look at here. First and foremost, it is necessary to remember that these metrics take into account both efficiency as well as strength of schedule. These are the reasons why the offensive and defensive numbers are so similar to the 2013 team. I am fairly confident that if you put the 2013 and 2015 teams up in a head to head battle 2013 would come out on top, but I think it may be a little closer than one might imagine. One of the biggest things that stuck out while reviewing this data was the Weighted S&P+. Want a metric to get you excited about next year? That would be it. As described above, Weighted S&P+ is an attempt (with somewhat unknown/limited effectiveness) to tell how well a team was playing at an end of a season. 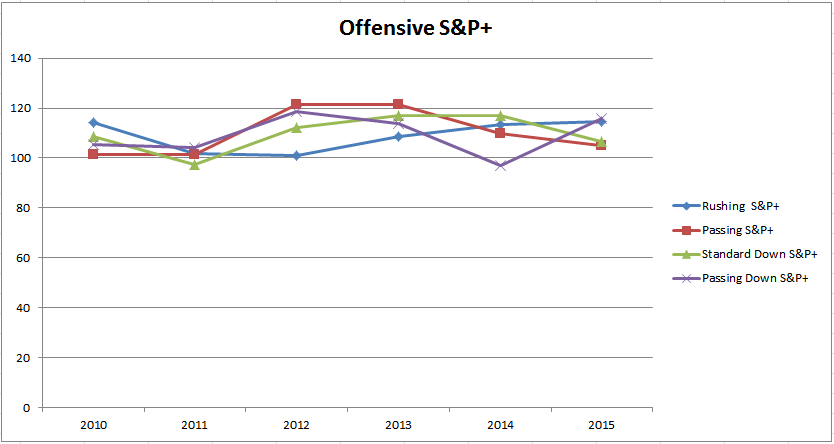 Note: It was fairly shocking to see that UofL’s overall offensive S&P+ rating was the best it has been since Petrino’s last stint at Louisville, even better than the 2012 & 2013 teams. Not only was the overall rating better but the rushing rating was also the best it has been in the past 6 six years. This is despite what most would consider a “sub-par” running game in 2015. Like it was mentioned above, this can be explained by the much improved schedule and much tougher defenses in the ACC.

Note: This was the most interesting data to look at in regards to the last couple years for me. On one hand, adjusted line yards and opportunity rate are two metrics that show that the offensive line could perform well when it didn’t completely breakdown (see stuff rate, adjusted sack rate, and standard/passing downs sack rate). Obviously, this is caused by a lot of by a lot of youth along the offensive line in 2015. One stat that was nice to see a big improvement on was the power success rate. From 2014 to 2015, UofL improved by over 7% in a stat described as “Percentage of runs on third or fourth down, two yards or less to go, that achieved a first down or touchdown”.