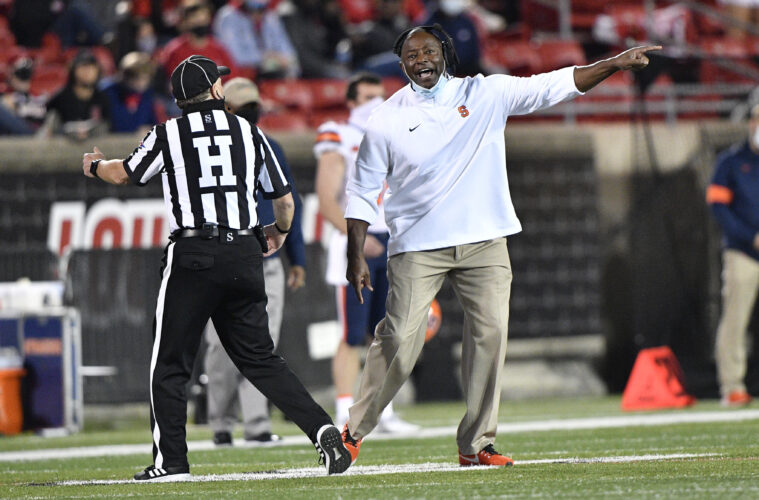 College Football has a few new rules changes that will affect the 2016 season.  Last month at the ACC Kickoff we went to a seminar conducted by Coordinator of Football Officiating Dennis Hennigan to educate the media on how officials were interpreting certain rules & also what new rules will be in affect for the new season.  While we disagreed with some of the explanations given by Hennigan on enforcement of rules from last season we appreciate the opportunity to understand the spirit of rules.

Here’s what we learned:

In 2016 ball carriers that slide feet first will be ‘Defenseless’ and defensive players who hit them will be subject to the targeting rules.

The controversial part of this rule will be in spotting the ball as officials have been instructed to mark the ball at the point in which the slide begins.

Tripping intentionally while using the lower leg to obstruct an opponent below the knees is now enforceable with contact to the ball carrier.   Previously the tripping penalty omitted the ball carrier, but now provides the ball carrier with protection.

This rule will definitely become apparent in the first few weeks of 2016.

Teams with the lead can not benefit by penalty in the last two minutes.  If the game clock is stopped to administer a penalty with a team in the lead inside the last two minutes of a half the game clock will start on the snap.  The only exception will be 10 second runoffs.  Officials have been asked to strongly consider unfair clock tactics in the final 5 minutes of each half as well.

The Auburn vs. Louisville game was a key example when deciding this change.  The rule was long overdue to be amended as teams with the lead and the ball could commit a holding penalty and have the yardage enforced with the game clock to start after the ball was set ready to play rather than at the snap.

Head coaches may request that one of the 3 timeouts in each half (and OTs) be a full timeout.  All other timeouts will be 30 second timeouts, unless TV elects to go to commercial.

All Targeting Fouls To Be Reviewed  & Collaborative Instant Replay

The replay official will review all targeting fouls.  The replay official can also interject and call ‘egregious’ targeting that is not called by the officials on the field.  Collaborative replay will be used by the ACC in an experimental season whereby the league office (in Greensboro, NC) will work with the onsite replay official to attempt to have uniform rule interpretations.

The NCAA Football Rules Committee released a statement in March saying that the committee believed that players were incorrectly disqualified from games in a small number of cases last season.

Players with 2 Unsportsmanlike Penalties are ejected, that now extends to coaches.

Hot button topic from coaches imploring officials to enforce the 3-yards to draw the ineligible man downfield penalty. No new rule, but officials have been tasked to ‘stringently enforce’ the 3-yard limit on lineman blocking downfield on pass plays.

There was a proposal in the rules committee to reduce the limit from 3-yards to 1-yard but that rule was not enacted.  So look for greater emphasis of this in 2016.