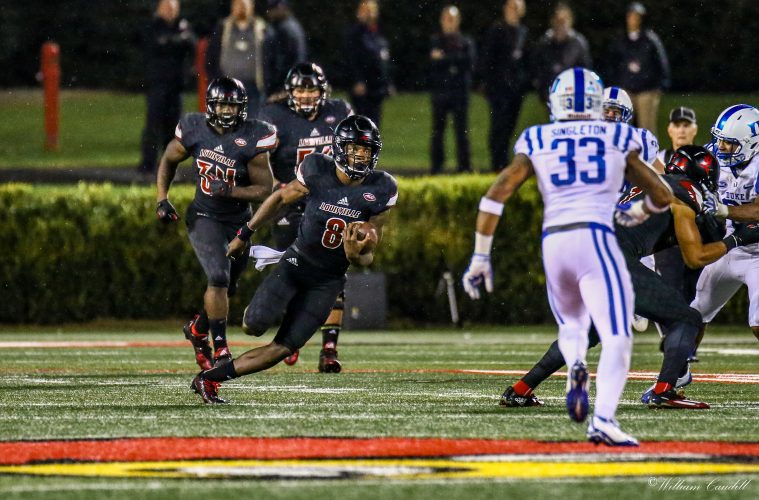 Lamar Jackson is now a ridiculous favorite to win the Heisman Trophy at odds of 1-30. Odds like that don’t come around very often…… but neither do players like Lamar.

The Cards are extremely unlikely to play in the ACC Title game and are currently ‘just’ outside of the College Football Playoff. So Lamar Jackson is likely going to play just 13 games in 2016……. and that’s a shame for a few reasons. First, watching Lamar Jackson play college football is transcendent and it just seems like a waste to cut the season short. But secondly when comparing Lamar Jackson to former Heisman winners he’s going to have just 13 games in 2016….while other Quarterbacks were able to play 14 or 15.

STILL(!) Lamar Jackson’s current pace is ahead of former Heisman Quarterback winners who will most likely have played 1 or even 2 more games than Lamar did in 2016. Couple that with the fact that Lamar hasn’t played deep into the 4th quarter with the exception of a few games.

Jackson is on pace for 65 Touchdowns responsible for this season which would easily be the highest total of recent Heisman Winning Quarterbacks……and we’re only projecting 13 games. 5682 yards!!!  That’s ALSO above and beyond anything we’ve seen recently…… OR EVER.

3 more regular season games and at least 1 post-season game is coming for the Cards.  Enjoy the ride Cards fans.  Lamar Jackson is a once in a lifetime type player and what’s he’s doing to the College Football Record Book is unprecedented.