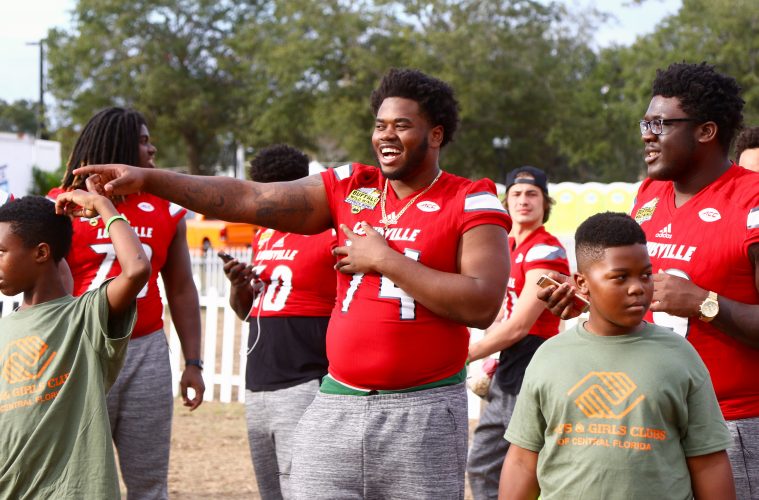 Geron Chrisitian Picked in the Third Round in NFL Draft

University of Louisville offensive tackle Geron Christian was selected by the Washington Redskins with the 74th overall pick in the third round of the 2018 NFL Draft on Friday evening at AT&T Stadium.

Christian, the 37th former Cardinals to be taken in the draft under head coach Bobby Petrino, is the highest offensive tackle selected since Jamon Brown was the No. 72 pick by the Los Angeles Rams in the 2015 NFL Draft. Christian is the 19th offensive linemen to be drafted in school history and the first since Brown and John Miller were third-round selections in the 2015 draft.

“I’m thrilled for Geron to receive this tremendous opportunity to advance his career to the next level,” head coach Bobby Petrino said. “He was a stabilizing force up front – the only player to start every game over the last three seasons on the offensive line. With Geron leading the way, our offense was able to put up record-breaking numbers and assisting in producing a Heisman Trophy winner. I wish him all the best as he pursues his professional career.”

The Ocala, Fla., native started all 39 games he played over the course of his three seasons, netting all-ACC honors in each of those campaigns.

A starter in all 13 games at offensive tackle last year, Christian was named an all-ACC honorable mention selection after leading the Cardinals to one of their finest offensive outputs in school history. The unit produced school records in total offense with 7,084 yards and rushing yards with 3,186. The Cardinals averaged 38.1 points per game, tallying over 35 points in eight games.

Taking the field as a true freshman in 2015, Christian was the only offensive linemen to start every game. He earned all-ACC honorable mention accolades in guiding the Cardinals to an 8-5 record and a win over Texas A&M in the Music City Bowl. After starting the season 0-3, the Cardinals won eight of their last 11 games and six of the last seven to close the year.

“I am so excited to see Geron get this opportunity to take the next step in his football career,” offensive line coach Mike Summers said. “This has always been his dream to play in the NFL. It’s great to see that his hard work has paid off and helped him get to the next level. I am proud of what he has accomplished.”

Louisville ranked in the top 10 nationally in runs of at least 10 yards in each of the last two seasons, finishing fifth in 2016 and ninth in 2017. The Cardinals have been one of the top offensive teams in the country over the last two years, closing as the third-ranked offense in each of the two previous seasons.