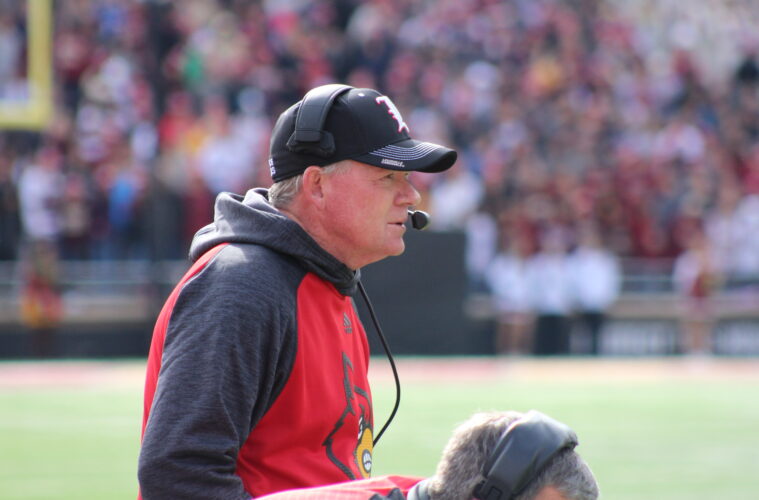 Bobby Petrino took time at his Monday afternoon press conference to discuss the Cards’ upcoming game on Thursday Night vs. the Houston Cougars.

“It was a good win for us Saturday night. First of all, I’d like to thank the fans. They did a great job. Card March was exciting. I thought it was a great crowd and certainly helped our defense a bunch, and I know it was exciting for all of the recruits that we had here and our players. Defensively, I thought we played really well. Maybe as good as we’ve played all year long. Even in the first half when we were holding them to field goals when they were in position to get touchdowns – came to be huge for us. And then in the second half we completely shut them down. I’m not sure how many yards they had, but I think they had two yards in the fourth quarter and scored on defense and got great turnovers, so it was a very, very good performance by our defense. Offensively in the first half we turned the ball over. That made a huge difference in the first half of the game, and we can’t do that. We’ve got to do a better job of running with it, secured. They did a good job of trying to strip the ball. You could see them doing that even when we didn’t turn the ball over. On Reggie’s [Bonnafon] fourth down catch, on Traveon’s catch and run they were really trying to get the ball out on them. But we stuck together. We found a way to really run the football, which was important to us. I think we had 346 yards rushing. Brandon Radcliff had a great game. He had some huge holes and showed his speed. The receivers are doing a really good job blocking down field. I think that is really getting coached and even a couple of other times we were in great position and would have had a couple touchdown blocks down the field. And special teams, we came up with a good game too. All in all it’s a good, hard-fought win. I think when you win games that are hard-fought, it’s good for you as a football team. So now we are full swing, getting ready for this Houston game. We came back last night and had meetings for it and walk-through and then today will be a normal Tuesday practice for us. It really is a short week for us, but I think we will be able to handle it well and one of our goals will be to get to the game fresh physically and mentally, and I think our players will do a good job with it. I’m excited for the game. They have a good football team. Obviously, had a great battle with them last year and came up on the wrong end. We turned the ball over a bunch and had a chance to win it at the end, and a penalty cost us field position, so we’re looking for a good football game and we need to find a way to win the game.”

(On how much the team remembers last year’s game)

“I’m not sure. We’re a much different team than we were last year. Right then we were trying to even find out who we are and what we were doing and everything was new to Lamar [Jackson] when he was out there. He made some really good plays in the game. He made some mistakes. Just understanding the difference between high school football and college football, so I don’t think last year’s game will play into this game at all.”

“He really has done a nice job running the football. He’s hard to tackle. He made some plays against us where it looked like we had him boxed in, and it looked like we had everybody covered, and he was still able to create room and run out and make conversions. His ability to run the ball was the way they won the game in the fourth quarter, so we’ve got to do a good job being disciplined like we were in the second half last week. We didn’t give any lanes, we got push inside, and great speed off the edge. The other challenge that they present you with is they’ll throw a bunch of balls out there quickly to their receivers and block and run. They get a lot of big plays just by throwing the ball out, getting a block, and taking off and running. That combination of a quarterback runner and a quick throw to the receivers with guys blocking in from of them is something we will have to defend.”

(On if Houston is a team that requires extra attention)

“Yeah, it was just because of what they do defensively. It’s a unique scheme. Something that we studied over the summer. Again, that seems like a long time ago, but we have all of our notes and all of our things from it. Last week they came out in a different front, so the question is were they just doing that for us, saying they were going to win the game and are they going to comeback to what they’ve been doing traditionally, or is that something that they’ve resolved into this year. They played really good defense, so I’m not really sure which way it is. Where they play in the ropey-dope or were they really transitioning to that defense. We’re going to find out quickly, I think.”

(On D-line and Ed Oliver)

“He is a really talented guy, he is a combination of power and speed, certainly a good player, and he plays extremely hard too, which as a true a freshman, you know is a real credit to him.”

“I mean he looks good to me. It looks like he is throwing it well and he can really run. I remember, I don’t know what game it was, they were on late at night or something, and they were saying that he had been injured and he was running up and down the field so I’m not sure.”

(What makes a defense susceptible to a running quarterback?)

“I mean all defenses are. You know, it is an advantage to have another body out there that can run the football, so you have to count it, you have to change your fits and change your responsibilities and you know be disciplined in your pass rush. A lot of times when you get a quarterback that can’t move and run you can do some wild things with your pass rush and feel like you can just run them down. Well, you can’t just run this guy down.”

(How much did you see of the weekend results/polling?)

“We had just full steam ahead for this game. It is a really short turnaround. We played at seven o’clock on a Saturday night and then again on Thursday. That’s a short turnaround for our players and our coaches. It required us to do some work last week on Houston. Usually on Fridays, I get to let our coaches take their kids to school and then come in here later on Friday morning. This week we were in the office at 7am working on Houston. Usually they get to spend some time on Saturday morning. We were up at seven on Saturday working on Houston. So, it’s a short turnaround, and we had to adjust schedules. I probably don’t know a whole lot that’s going on in the world right now besides getting ready for the Houston game.”

(Being 3rd in rankings)

“Yeah, I think for our players, they just have to understand that they need to go out and play well, and play the type of football we are capable of playing. Really, that’s what we need to do our last two games, and then whatever happens, happens. We can’t control any of that. We just have to go play the way we are capable of playing and obviously we know its on national TV, nobody else is playing, everybody will be watching it, but those are the type of games we like, something that is fun as a team, something that we feel like has always helped us in recruiting, and we are used to playing you know mid week games.”

(After the game against Boston College you kind of regretted a little bit not pushing harder against Florida State scoring more. You guys did score a touchdown last Saturday. Is that the kind of attitude mindset you have to have going forward?)

(How is Harvey Clemons doing?)

We’ll find out today. He should be out there today and we will see how he is going and hopefully he will be ready to go.