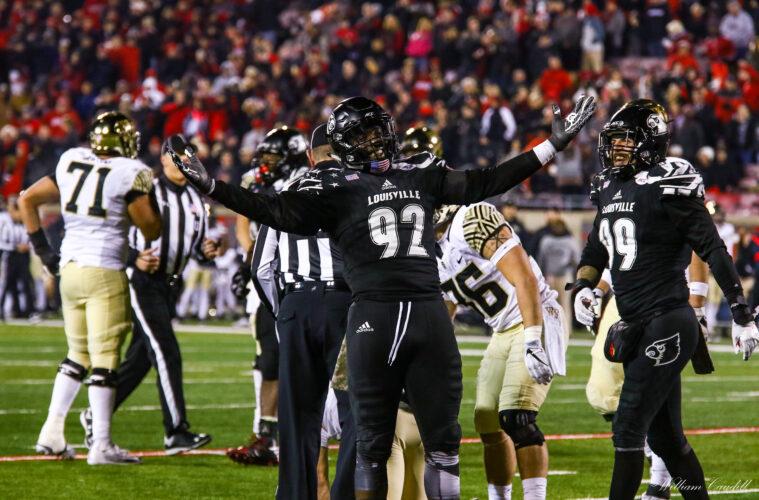 Devonte Fields, Louisville, Sr., DE, 6-4, 242, Fort Worth, Texas
Fields tied for the team lead in tackles with nine in Saturday night’s 44-12 win over Wake Forest. Fields tallied three sacks and 4.5 tackles for loss as the Cardinals limited the Demon Deacons to 214 yards of total offense (37 yards in the second half). Fields led a defensive charge that saw Louisville register seven quarterback sacks as a team.

Pitt leads the way with three Atlantic Coast Conference Player of the Week selections following the Panthers’ 43-42 upset win at No. 2 Clemson on Saturday.

Pitt quarterback Nathan Peterman was voted the ACC Offensive Player of the Week, while Matt Galambos earned Co-Linebacker of the Week honors and placekicker Chris Blewitt was the Specialist of the Week.

Peterman also earned recognition as the Walter Camp Foundation National Offensive Player of the Week, marking the seventh time in 11 weeks this season that an ACC quarterback has received that award.

Georgia Tech and Duke each saw two players recognized following their wins over ranked teams.  The Yellow Jackets’ Parker Braun received the nod as the Offensive Lineman of the Week, and Lawrence Austin was named the Defensive Back of the Week for their play in a 30-20 road win at Virginia Tech. The Blue Devils’ Joe Giles-Harris shared the Linebacker of the Week honor following a 28-27 win over rival North Carolina, while Duke freshman quarterback Daniel Jones was the ACC Rookie of the Week.

Louisville’s Devonte Fields earned ACC Defensive Lineman of the Week accolades, while Clemson’s Mike Williams was the Receiver of the Week.

The ACC weekly honor is the third of the season for Duke’s Jones, while the Panthers’ Blewitt was recognized for the second time.

Peterman threw for a career-high 308 yards and five touchdowns with no interceptions in engineering the 43-42 upset of No. 2 Clemson. Peterman’s five touchdown passes matched the total yielded by the Tigers’ defense for the whole season prior to Saturday. Peterman threw for 242 yards and four TDs in the first half alone. His scoring strikes to running back James Conner (46 yards) and tight end Scott Orndoff (55 yards) were the longest against Clemson this season.

One of three freshmen to start across the offensive front for Georgia Tech on Saturday, Braun led the Yellow Jackets with 10 knockdown blocks in their 30-20 win at No. 18 Virginia Tech. Behind the Braun-led line, Georgia Tech rushed for 309 yards on 58 carries (5.3 yards per carry) and surrendered only one sack.

Fields tied for the team lead in tackles with nine in Saturday night’s 44-12 win over Wake Forest. Fields tallied three sacks and 4.5 tackles for loss as the Cardinals limited the Demon Deacons to 214 yards of total offense (37 yards in the second half). Fields led a defensive charge that saw Louisville register seven quarterback sacks as a team.

Galambos had a game-high 12 tackles, none bigger than his stop of Clemson’s Wayne Gallman for no gain on fourth-and-one at the Pitt 35 with 58 seconds left. That tackle gave the ball back to Pitt, setting the stage for the Panthers’ game-winning field goal drive. Galambos was also part of a six-yard quarterback sack.

Giles-Harris recorded a season-high 16 tackles in the Blue Devils’ 28-27 win over No. 15 North Carolina, including one for loss. He posted 10 tackles in the second half as Duke limited UNC to six points, 147 total yards and just one third-down conversion in four attempts (UNC entered the game leading the ACC in third-down conversion rate). He spearheaded Duke’s defensive effort that limited the Tar Heels to 403 total yards – 56.7 yards below their season average entering the week – and aided in the pressure of quarterback Mitch Trubisky, who threw two interceptions in 33 attempts after tossing just two interceptions in 317 attempts in UNC’s first nine games.

Austin turned in one of the finest performances by a Georgia Tech defender in recent memory, directly contributing to three of the Yellow Jackets’ four takeaways in a 30-20 victory at No. 18 Virginia Tech. Austin recorded two interceptions and forced a fumble to go along with four tackles in the victory, with two of those forced turnovers leading to Georgia Tech touchdowns. He became the first Georgia Tech player with two interceptions in a game since 2011 and led a defensive effort that saw Georgia Tech limit Virginia Tech to 14.9 points below its season average going in to the game.

Blewitt capped one of the biggest upsets in college football this season with a 48-yard field goal with six seconds left to push Pitt past No. 2 Clemson, 43-42.  It marked the third time in his career, and second time this season, that Blewitt capped a fourth-quarter rally with a game-winning field goal.