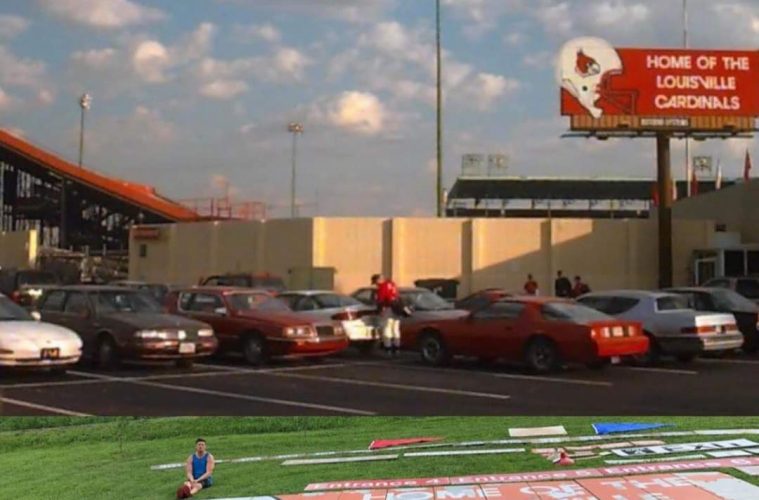 As most of you know, Old Cardinal Stadium was finally demolished last year after years of sitting mostly vacant. And as Louisville fans, we all have fond memories of countless football games, Redbird games, and concerts. While I arrived in Louisville near the end of its long life, my first memories as a Cardinal fan were in that beat up old building.

And while the former residents of Old Cardinal Stadium have moved on to inarguably nicer facilities (Cardinal Stadium & Slugger Field), there’s just something about those old buildings that bring up memories and feelings the new places can’t. Like your first car. You know, the old beater where you got to second base in the backseat with your high school girlfriend. That 88 Corolla with the dented bumper and no AC…sure your late model luxury SUV is nice, but she doesn’t have that history. That personality…

Like many of you, my good friend Justin Thurman grew up with Old Cardinal Stadium being the setting for some of his best memories, and the backdrop of his first love story…with UofL sports. When word came down that the Fair Board was finally going to tear down the old edifice, Justin got permission to wander around the grounds. He ended up collecting a lot of old signage; bathroom signs, concession price lists, directional guides. He laid them all out, lovingly cleaned and restored what he could, and with the permission of a very understanding wife (trust me on this), he put together his ultimate vision. A museum of sorts, right in his own basement.

Click the link below to see the video he put together of his experience, mixed with clips and soundbites from the stadium’s storied past. Enjoy.