–          Lamar Jackson was the spark plug this offense desperately needed. When the offensive line struggled, Jackson was able to use his feet to pick up the needed yards. When the line was able to pass protect, Jackson shredded defenses with his arm. He finished the year with 2800 total yards, 23 total touchdowns, 8 interceptions, and averaged 6.83 yards per play.

–          Heading into his senior year, Sheldon Rankins was expected to be the leader of this defense, potential top NFL draft pick, and overall star defensive lineman. He either achieved or put himself in the position to be all 3 of these. Rankins finished the year with 58 total tackles, 13 tackles for loss, 6 sacks, 1 pass broken up, 7 QB hurries, and 1 46 yard fumble return for a touchdown. Not only did Rankins put up these numbers, he was very consistent. You knew what you were getting every game and most teams focused their schemes around defending him, allowing other players to make plays.

Ugly: Offensive line play. There were times toward the end of the year that showed great promise and development in the o-line, but up until that point this unit had some trouble finding an identity. UofL finished 110th in the country in stuff rate allowing the running back to be stopped at or behind the line of scrimmage 23.3% of the time. They also finished 127th nationally in standard downs sack rate at 10.9%.

Ugly: 1st half UK defense and 2nd half FSU defense. Both were inexcusable as they were a lapse in effort and execution. Going forward this cannot happen.

–          There was much criticism, especially early in the year, regarding Coach Petrino and the offense. While there were several instances that made some question whether Petrino still “has it” I think one must look at what he had to work with.

–          While I am not putting down any Louisville player, I couldn’t help but notice that the combination of Josh Harvey-Clemons and Chucky Williams did not match the typical safety role that had been held the past couple years by James Sample and Calvin Pryor. Both Pryor and Sample were very physical safeties which worked well in 2 ways. First and foremost, neither player were afraid to assist in run support. In fact, both players seemed to relish in the idea of sticking their nose in the middle of a running backs’ pads and driving him back where he came from. Not only this, both Pryor and Sample provided something in coverage that neither JHC nor Williams did, the ability to get in the head of opposing receivers. When Sample or Pryor were on the field, any receiver that ran an inside route always had the idea in the back of their mind that at any given time they could be blown up and left lying there in pain.

–          There is an argument that could have been made for Devonte Fields to be named MVP on the defense and I would have considered it had he been consistent throughout the entire year, but the type of season he has is worth note. I am sure everyone knows by now where Fields came from and how he came to Louisville very late in the process so it took him a while to get up to speed both mentally and physically. Despite this learning curve, Fields finished with 64 total tackles, 22.5 tackles for loss (tied for 1st nationally), 11.0 sacks (tied for 9th nationally), 3 passes broken up, 12 QB hurries, and 2 forced fumbles. After the disappointing 2nd half against Florida State, Fields told Coach Petrino that he wouldn’t let that happen again. Fields’ last 7 games of the year he totaled 18 tackles for loss, 10.5 sacks, 2 forced fumbles, and 31 total tackles.

–          If this is the first time reading one of these I decided to compare a team’s S&P+ (computer) rating to the yards per play either achieved or allowed by UofL. This gives a simple, but fairly accurate analysis of just how well UofL’s offense/defense played in any given game. As you can see by the offensive data and graph, from the Virginia game on not only did they improve every single game, they also became more consistent, a sign of Louisville’s young offense maturing. 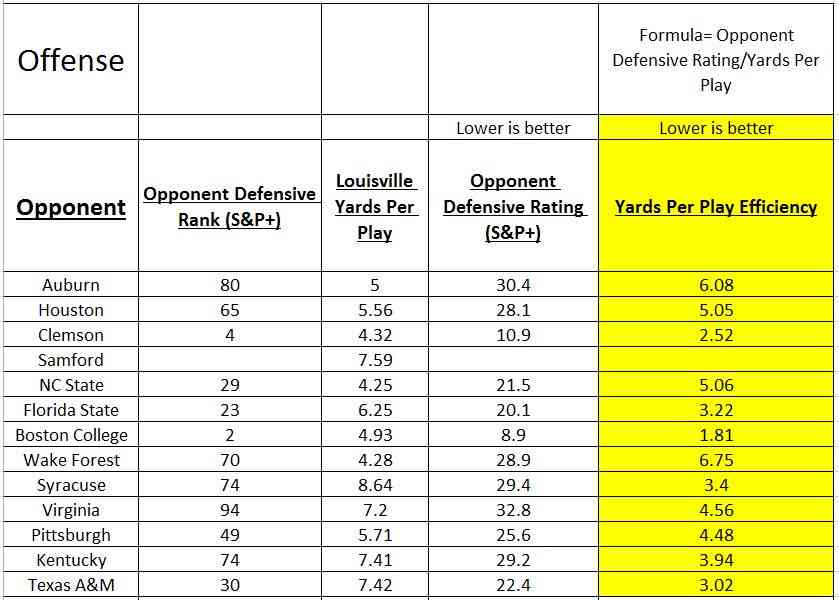 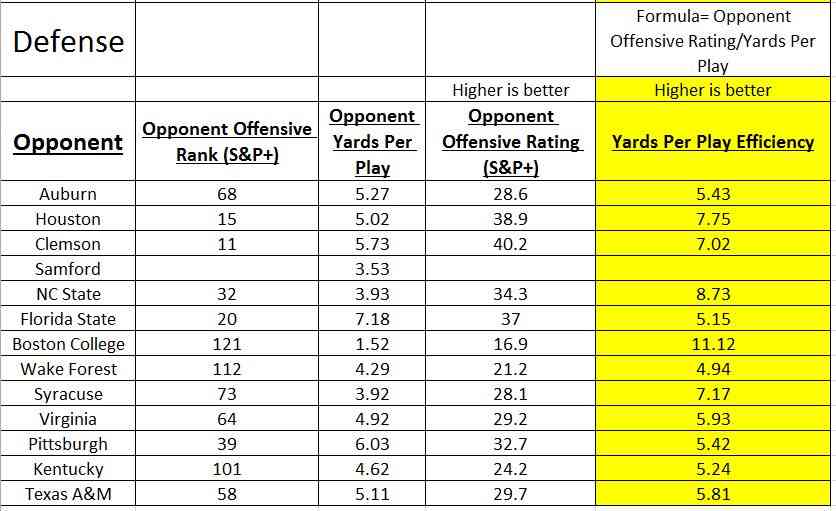