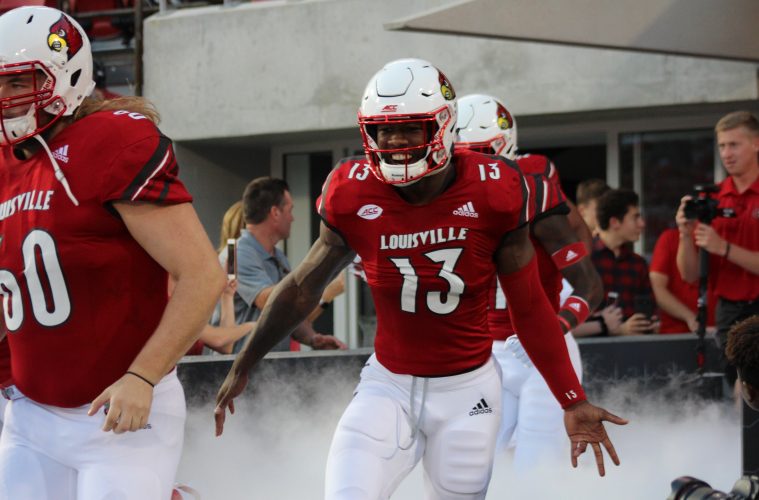 Fall camp officially started at the University of Louisville as the Cardinals put the pads on Thursday morning.

Under hot and humid skies, the Cardinals worked out for two hours, holding a few periods of 11-on-11 and tackling players to the ground for the first time during camp.

“The guys did a good job today,” outside linebacker coach Cort Dennison said. “It was a physical practice. I thought they did a good job, but there is plenty to improve on over the next few weeks.”

Dennison, who returned to Louisville after a year at Oregon, was excited to put full gear on Thursday morningand the fifth-year coach was able to gauge where his team stands heading into Saturday’s first scrimmage.

An outstanding linebacker at Washington, Dennison knows exactly what he wants out of his position group, and so far after five practices, Dennsion has seen a lot of progress.

One of the players who will make an impact at the outside linebacker position is sophomore Nick Okeke, who played inside last season as a redshirt freshman.

A native Smyrna, Tenn., Okeke got his feet wet in 2018, totaling 42 tackles in 12 games. He recorded a season high eight tackles versus Virginia and Georgia Tech in his first season on the field.

“He has a lot of position flexibility,” Dennison said. “He’s a big body, athletic, who can play on the line of scrimmage and cover people. We’re asking him to play on the edge and play in space, so we’re asking a lot more of him this season, and a player who has his smarts, will be an asset to our defense.”

Okeke came to Louisville as a 17-year old freshman and had to experience a period of adjustment on the field and in the weight room.

The Smyrna High product has bulked up to 248 pounds this year, which will help him to set the edge against the run.

“Having three defensive coordinators in the last years has been tough, but I learned a lot from all three,” Okeke said. “I played outside linebacker in high school so I know how to play the outside. I played inside last year and I had to know everything that was going on over the entire field, which is helping me this season.”

The Cardinals will take Friday off from practice before returning Saturday morning for the first scrimmage of fall camp.