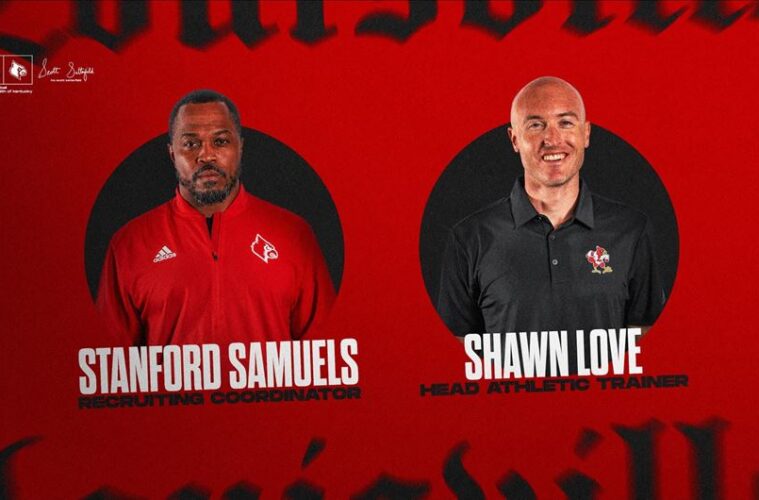 Stanford Samuels has been named Recruiting Coordinator and Sean Love was elevated to Director of Sports Medicine and Head Athletic Trainer for the University of Louisville football program on Thursday.

Samuels, a former standout cornerback at Florida State, was named to lead the recruiting efforts.

Before joining the Louisville staff, Samuels spent the previous two seasons coaching the cornerbacks at Florida Atlantic. In his first season with the Owls, Samuel assists on a defense that was 10th in passing efficiency defense and 16th in passing yards allowed, while finishing 10th in scoring defense.

During his second season, Samuel’s unit allowed 188.2 yards passing per game, which stood fifth in Conference USA and 16thnationally. The Owls’ defense allowed 17.4 points per game and finished fourth in the league in total defense.

Samuels, who spent one season at Florida State as a defensive analyst, began his coaching career at Flanagan High in Fort Lauderdale.

As a player, Samuel tallied 156 tackles and six interceptions during his career at Florida State. Originally signed as an undrafted free agent by the Indianapolis Colts, Samuels saw time with Edmonton, Winnipeg, and Montreal in the Canadian Football League.

Samuels earned a degree in sociology from FSU in 2003.

Love was promoted after serving as the associate football athletic trainer for the Cardinals since July of 2018.   Along with the collaboration of team physicians, Love is responsible for directly overseeing the health care of football student athletes.  He helps to develop and implement strategies and protocols to prevent, treat, and rehabilitate athletic injuries and illnesses.

Love joined U of L after four seasons as an assistant football athletic trainer at the University of Kansas, including serving as the interim Head Football Athletic Trainer in the spring of 2018.

At KU, Love was responsible for the inventory and ordering of medical supplies for the football facility.  He also served as an adjunct professor for the CAATE accredited undergraduate program at Kansas from 2014-18.

Before joining the Jayhawks, Love was an assistant athletic trainer at Duke University where he covered baseball and aided the football program.

Following his graduation from Kentucky, Love served as a year-long athletic training intern with the New England Patriots during the 2010 NFL season and began his career as a training camp intern with the San Francisco 49ers in 2007.

A native of Mattoon, IL, Love is a member of the National Athletic Trainers’ Association and the Southeast Athletic Trainers’ Association.  He also holds a Corrective Exercise Specialist certification from the National Academy of Sport Medicine and a Blood Flow Restriction Rehabilitation Certification.  Shawn is married to the former Jackalyn Bradley.  The couple has a daughter, Beckett, a son, Parks, and twin daughters, Slate and Decker.