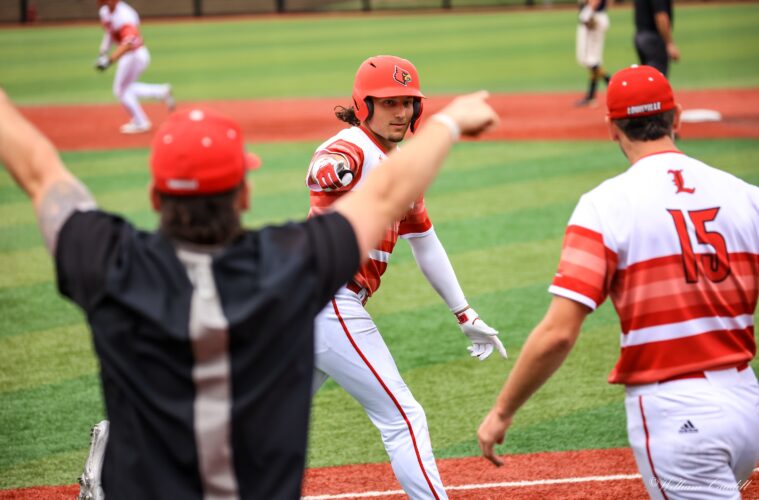 The University of Louisville baseball team turned a two-run deficit into a two-run lead in the eighth inning on its way to an 11-9 clinching victory on Monday at Jim Patterson Stadium.

Louisville (42-19-1) clinched its ninth NCAA Super Regional appearance with the win. The Cardinals will head to College Station, Texas, to take on Texas A&M next weekend.

The Cards opened up Monday looking like it was going to roll to a victory.

Despite Michigan (34-28) jumping in front with two runs in the top of the first inning, Louisville had a huge response.

With the two in scoring position and two away, Levi Usher doubled into the right field corner to tie the game up at two. Cameron Masterman followed with a run-scoring single to give the Cards the lead and Logan Beard added on with a hit of his own to make it 4-2.

Following a pitching change, Christian Knapczyk laid down a perfect bunt single to plate a run and Ben Metzinger drew a walk for the sixth run. The Wolverines then misplayed a ball on the infield to cap off a seven-run first inning.

A solo home run cut the lead to four in the third before Mother Nature struck. The game paused in the bottom of the third for one hour and 33 minutes, after which the Wolverines regrouped.

Michigan tied the game with four runs in the fifth and then regained the lead with two more in the sixth.

Trailing 9-7 in the eighth inning, the first two Louisville batters of the frame were retired. Dalton Rushing worked a walk and Jack Payton doubled off the left field wall to put the tying runs in scoring position. Usher then delivered a two-run single into centerfield to knot the game up.

With the game hanging in the balance, Masterman launched a no-doubt two-run home run over the berm in left field to put the Cardinals in front.

Michael Prosecky then slammed the door shut in the ninth for his 11th save of the season. Tate Kuehner (7-3) pitched 2.1 scoreless innings out of the bullpen to pick up the win.

Usher was 4-for-5 on the day, the first four-hit game of his career, with four RBIs. Masterman and Knapczyk each had a pair of hits.