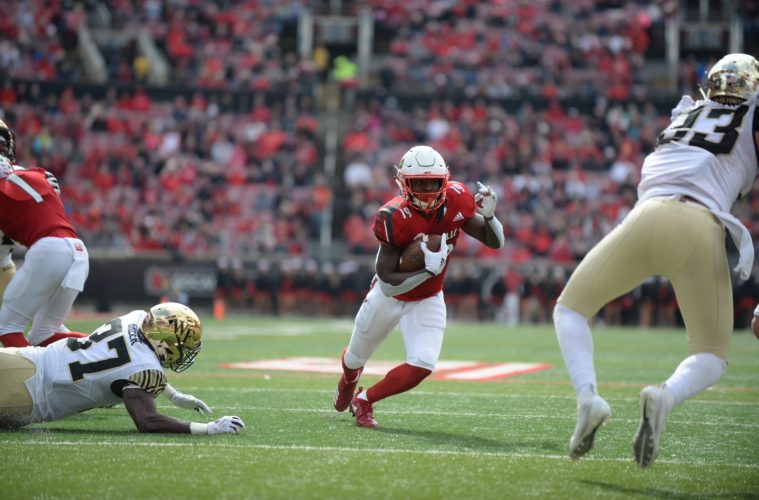 It was almost exactly one year ago this week that a jilted Bobby Petrino recruit decided to shove all of his recruiting frustrations straight down the Cardinals throat in front of a demoralized Card Nation. Matt Colburn took his ball and ran it all over the turf at Cardinal Stadium in one of the most pronounced incidences of comeuppance in Louisville football history. But on Saturday a refreshed, reorganized, and rejuvenated Louisville team will travel to Winston-Salem and continue their bid to erase the 2018 season from memory as they face the Demon Deacons of Wake Forest.

Wake Forest comes in ranked #17 / #19 off of a bye week and riding their best start since 2006 at 5-0. Two of those wins came easily against Rice and FCS Elon but the rest, including their ACC opener at Boston College, have been relative squeakers. But when it counts, the Deacons have it. Head coach Dave Clawson leads a team with a highly effective (and lightning fast) RPO offense that is currently tops in the ACC with at least 400 yards per game. And when the Deacs have been in those tight late-game spots they get by as the least penalized team in the nation. Alertness, situational awareness, and mental focus all combine to make Wake Forest an opponent that is quite unforgiving to those who make mistakes.

That attention to the fundamentals is readily modeled by R-Jr. QB Jamie Newman who sports the most impressive start to a career of any Wake Forest quarterback. In 2019 so far he’s completing 70% of his passes for 304.2 yds/gm with 14 TDs. As part of that RPO he’s a threat on the ground as the third leading rusher with 52.4 yds/gm. Newman stands as an imposing figure at 6’4” 230 lbs behind an offensive line that’s allowed only six sacks this season.

A focus on putting pressure on the Wake Forest QB was a point of emphasis for Louisville coach Bryan Brown, having stated that he would prefer that his pass rush not grant enough time for Newman to stand behind the line and smoke a cigarette. Waiting downfield for him to finish his smoke break are WRs R-Sr. Scotty Washington and R-So. Sage Surratt. The two share the top spot in the ACC with six touchdowns apiece through the first five games of the season. Surratt claims sole possession of the top spot in the ACC for yardage with 103 yds/gm but Washington is close behind in third at 94 yds/gm. While Dave Clawson was quick to call out Khane Pass’s abilities it’s for certain that the Louisville secondary will have their work cut out for them against the Deacons’ onslaught.

At the line of scrimmage the Louisville defensive line will have to contend with RBs averaging 67.3 and 63.6 yds/gm in the persons of Cade Carney and Kenneth Walker respectively. Walker is a true freshman in the same vein as Javian Hawkins with his most notable accolade to date being a 96 yard touchdown run (longest in school history) against Rice. Carney, a true senior, has eclipsed the career 2,000 yard mark and has carried the ball 357 successful times since his last fumble…against Louisville in 2016.

Yet this offense is not equally matched by the Demon Deacons’ defense. Wake Forest’s defense has no doubt improved on its 2018 performance, but statistically they compare nearly equally to the Louisville defense. This does not, however, mean they can be easily overlooked. The Deacs have notched 13 sacks for 67 yards to date led by R-Jr. DE Carlos Basham who matches up well in comparison to G.G. Robinson at 6’5” 275. And despite only six INTs for the entire 2018 season the Deacons defense has managed five through the first five games of 2019.

Facing the 17th-ranked team in the country will be a Louisville Cardinals team that’s deservedly riding high on their first conference win in 23 months and most certainly a force to be reckoned with. But the overwhelming theme from the Louisville coaches’ availabilities this week was a focus on rectifying costly mental mistakes. All too often the Cardinals defense has given up big yardage on missed assignments. Even Dave Clawson was quick to point out that Louisville could have bested Florida State except for a particular instance of busted coverage.

And so focus and awareness will be the order of the day in Winston-Salem. This is not Scott Satterfield’s first rodeo at BB&T Field, having just barely fallen 20-19 to the Demon Deacons in 2017. Comparing both teams’ effort against Boston College, it’s clear they have equally dangerous offensive attacks. If the Cardinals can tighten up the defense, opportunities abound in North Carolina.