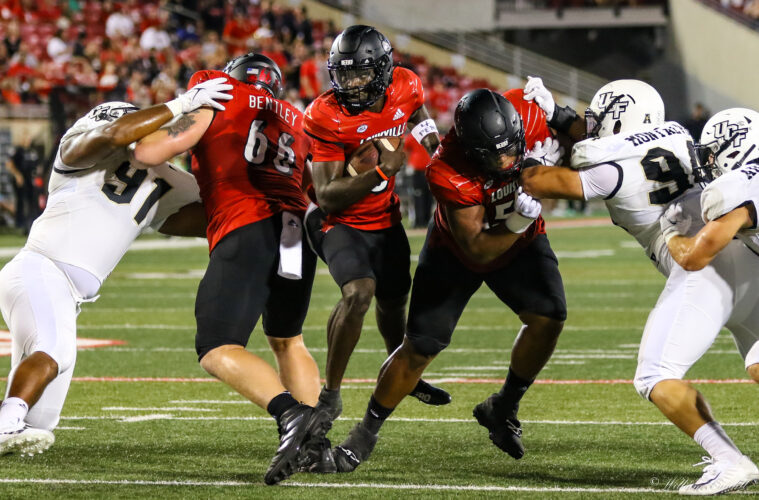 The offseason accolades keep pouring in for University of Louisville offensive guard Caleb Chandler as the he was namedone the 78 players who will compete for this year’s coveted award. The Rotary Lombardi Award® goes annually to the college football offensive or defensive lineman, who in addition to outstanding performance and ability, best exemplifies the character and discipline of NFL Hall of Fame Head Coach Vince Lombardi.

The Jefferson, Ga., native graded out over 85 percent in all 12 games and helped lead one of the nation’s top offensive units. The Cardinals averaged 212.9 yards on the ground per game, while averaging 5.4 yards per carry, Overall, the offense finished the regular season averaging 450.2 yards per game and averaged 31.9 points per contest.

This year’s watch list is filled with talent from a multitude of schools and conferences, which should make for an exciting voting process. To be considered for the Rotary Lombardi Award®, players must be a NCAA FBS College Football team member and meet the following qualifications:

·        Be a down Lineman, end to end, either on offense or defense, setting up no further than ten (10) yards to the left or right of the ball at the time of the snap.

·        Be a Linebacker on defense, setting up no further than five (5) yards deep from the line of scrimmage.

·        Must not come out of the offensive backfield and set up on the line of scrimmage as a Blocker or a Receiver or listed in the program as an Offensive Back or Receiver.

·        Be eligible to participate in the current season.

A mid-season watch list will be released on Oct 15 to reflect any updates to the current list.

The 2022 Rotary Lombardi Award® watchlist is compiled by a subcommittee of the Rotary Lombardi Award® committee and included SID submissions. Players were selected based on their past performance and expectations for the upcoming 2022 college football season. To be considered for the watchlist, players must also have started at least one game at an NCAA Division 1 college or university.

All ten Division-I FBS conferences will be represented in the 78-player watch list. With 11 players each, the SEC and the Big Ten conferences look to have strong seasons with dominant play. Seven players hold spots on this watch list from the 2021 College Football Playoff teams alone: Alabama, Cincinnati, Georgia, and Michigan.

The SEC is represented by players from Alabama, Arkansas, Auburn, Florida, Georgia, LSU, Ole Miss, and Texas A&M. Alabama standout, and 2021 Nagurski Trophy winner Will Anderson Jr. is expecting to be a top 3 pick in the 2023 NFL Draft. Along with Henry To’oTo’o at inside linebacker, Alabama’s defense looks potent. Preseason 1st-team All-American (Athlon Sports) Georgia defensive tackle Jalen Carter also has top 5 pick potential in the 2023 Draft, coming off a season with 33 QB pressures and 8.5 TFLs. Carter is joined by teammates Brock Bowers and Nolan Smith; both were 2021 1st-team SEC players.

Clemson and Notre Dame both have four players on our watch list. Clemson is represented by Jordan McFadden (OT), Trenton Simpson (LB), Myles Murphy (DE), and Bryan Bresee (DT); the latter two were both top 5 recruits in the country and Freshman All-American. Many are anticipating Bresee to come back stronger after only playing in 4 games in 2021 due to injury; he was awarded ACC Defensive Rookie of the Year in 2020. Notre Dame is represented by Jarrett Patterson, Michael Mayer, Isaiah Foskey, and Jayson Ademilola; all were 2021 All-Independent 1st-team selections. In the 2021 season, Foskey led the team and had the 3rd most sacks in a single season in ND history with 11.0; he was also a 3rd-team All-American (AP).

With eight players on our 2022 watch list, the west coast is going to be rocking with Pac-12 play again this season. Oregon’s 2021 1st-team All-Pac-12, Butkus Semifinalist, and 2022 Preseason 1st-team All-American (Walter Camp) Noah Sewell will solidify his dominant college career, coming off of 114 tackles with 8.5 TFLs last season alone. USC’s Andrew Vorhees, with 44 career games, is one of the most experienced offensive tackles in the country and comes off of the 2021 1st-team All-Pac-12 campaign. Vorhees is joined by two-time 1st-team All-Pac-12 Washington offensive tackle Jaxson Kirkland, who is looking for a 3rd 1st-team selection to bolster his draft position in the 1st round.