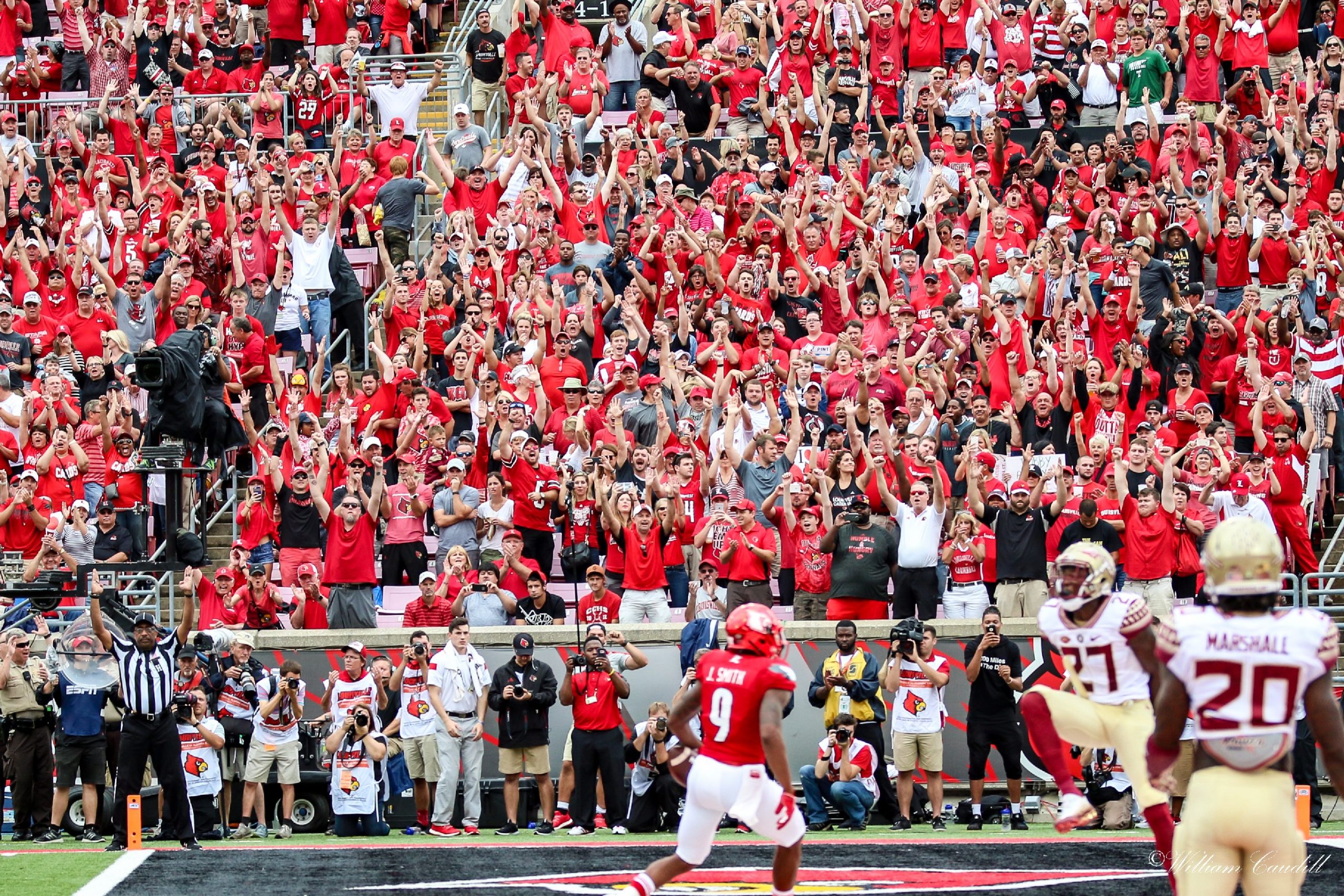 Puma, Malik, and Jordan deserve better.   Puma was a four star player who was also a member of the Elite 11, a prestigious honor for the top quarterbacks in the nation.  Malik Cunningham won POTY in Alabama, and recently departed Jordan Travis won the same award in Florida.  I don’t want to hear that we don’t have talent on this roster, especially when the bio on the team’s website says otherwise.

Puma Pass didn’t just forget how to play QB.  Nick Saban and Gus Malzahn wanted him out of high school, so that says a lot.  Malik Cunningham was not a highly rated QB coming out of Alabama just cause!  Jordan Travis was not wanted by schools like Georgia and Florida State because they liked his smile.

These guys could play football, and they still can.  They deserve a better coach than Nick Petrino, but you don’t need me to tell you that.  You have eyes.

I see people trying to give Nick a lot of credit for Lamar’s Heisman year.  This is the furthest thing from the truth. You can’t teach speed just like you can’t teach what God gifted.  Lamar did need help with passing mechanics, this is true, but we all know that was Bobby’s coaching.  You can only fake the funk for so long before the truth comes to light.  Sadly, the curtains have been pulled back on Nick Petrino this season where we see what a terrible job he has done  in preparing these highly touted QB’s.

Puma can’t set his feet, still stares down receivers, and sails his throws.   Malik Cunningham couldn’t go through his reads in his lone start against Virginia. The Cards never threw downfield while he was in that game. Jordan Travis never had a chance.  The staff put him in the game during a blowout and again against a Boston College defense that tee’d off on him for 2 straight series.   All three deserved what they didn’t have, a competent QB coach who can fix happy feet, errant throws, and passing mechanics.  That coach does not currently reside on UofL’s staff.   Instead they have an under qualified coach who doesn’t have to answer to his boss due to them sharing a bloodline.

You deserve more than a coach who is still learning on his job. There are high school coaches more qualified than Nick Petrino who is set to earn 200k this year.  200k to mold three talented QB’s who could have went anywhere out of high school.  The stories I am hearing about Nick’s coaching are that if it weren’t for Google he may not even know what a three step drop is.

The defensive line deserves a coach who can actually teach them how to get to the opposing quarterback. Mike Boykin, G.G.,  Jared,  Tabarius, Derek, etc. Those guys deserve better than what they are getting.  I remember how I felt seeing G.G. get a sack on the opening series against Bama.  Sadly, the sacks have been far and few in between.  And no, that is not just this year.  As players like Lorenzo Mauldin and Deiontrez Mount have filtered out, so has the coaching. Clint Hurtt could motivate anyone on that line, even a one legged man.

So far, it appears L.D. Scott is only teaching the players how to stand up and get pushed backwards.  The effort and talent is there, the coaching is still at home.  Terrible offensive lines not only get better against Louisville, they rarely get threatened.  Doesn’t matter that FSU’s line is among the bottom of the ACC, or that Wake Forest had a line that couldn’t stop traffic with a stalled car.  The closest the Louisville defensive line got to a sack was in the drive thru at White Castle.

This line deserves better because they are better.  And we all know it. But we have a coach who can’t recruit his position and has to raid the JUCO ranks just to plug holes.   There is no way Demji Dumervil-Jean should be playing this early.  He needs to be conditioned, and trained up.  A guy that massive and that talented is going to wreak havoc in the ACC, when he is ready.  This season, he was not ready and it was evident to everyone except L.D.

Youth is not an issue with this team, it’s an excuse being used. Looking at a recent depth chart, I counted 9 Juniors and 10 Seniors.  There are far younger teams that are doing more with less. It’s not about being young, its about coaching up the young talent.  Ed Oliver has been dominating since he stepped foot on Houston’s campus as a true freshman.  Trevor Lawrence is a true freshman about to take Clemson back to the CFP.  Bama had a true freshman QB and wide recievers come into the championship game with nerves of steel and win it.

The freshman and sophomores on this team deserve better than to be used as a crutch by a staff who is not talented enough to coach them.  Tutu Atwell won a state championship last season for Miami Northwestern,  I would think some coaches on that team are more qualified than some guys on ours.  Tutu is going to be a great player for UofL (assuming he stays).  He deserves better than to be sent over the middle and laid out by much bigger linebackers and safeties because our coaching staff doesn’t value his talent or health.

Dez and Seth deserve better.  As does Justin Marshall (still has not stepped foot on the field), Keion Wakefield (stayed home to play for his city), Josh Johnson (was primed to be a breakout player on this team before AND after his injury),  Corey Reed (remember him tearing it up last season?),  and Chris Taylor Yamanoha (one of the greatest California high school players ever and now can only get on the field during special teams).  This group was supposed to be the next crop A.F.R.O.S, and they still can be…….just not under Lonnie Galloway.

It says a lot that you retain a coach who participated in an embarrassing cheating scandal.  It also says a lot when the receiving unit still struggles with drops nearly 3 years after Galloway’s hire.  These young men deserve better. Part of the reason we can’t fire Petrino is because our co-offensive coordinator is not equipped to take over as the interim. Think about that.  Imagine working at a burger joint and they can’t fire you because no one else knows how to fry French fries and turn off the griddle.

Jaylen Smith came back to college for this?? He was, and still is a dominant receiver and I am almost willing to bet he will be on a roster next season,  or at least a practice squad.  And that is not due to Louisville coaching, its due to his natural talent and hunger to be better.  I can almost guarantee he will find the coaching he is lacking at the NFL combine where hopefully he will be invited.

Dez Fitzpatrick is a “throw it up” type player. It’s not a matter of if he will catch it, it’s how.   Seth Dawkins turned down Ohio State to come here and we can’t seem to find him on the field despite him being a huge receiver.   They all deserve better play calling and coaching.  We are so deep at receiver, yet so thin at common sense when it comes to coaching them.

Hassan Hall and Colin Wilson deserve better.  So does running backs coach Kolby Smith who is going to lose his job more than likely because of his incompetent boss.  Hassan is clearly the best running back we have, yet everyone but the guy calling the plays knows that.  Dae Williams and Trey Smith deserve better than to have to play musical chairs each half.   Not game, half.   I am not sure if I am watching football or a game of bingo when it comes to the running back position.

Javian Hawkins is a dynamic running back but the staff doesn’t care about his long term health because they continue to run our smallest back up the middle.  He has breakaway speed that he deserves to show.   Kolby finally has a nice stable of speed and power at his position but unfortunately he may not get to see it come to fruition.

Russ Yeast deserved better, and now that he is gone I hope he finds it. He was a highly touted player who was supposed to be a future gem on this defense.  This year he was regulated to special teams and I don’t think I had seen him on the field since the UVA loss.

I keep hearing about how great safeties coach Lorenzo Ward is but it seems to me the only defense he knows is when he gets defensive on Twitter and goes on a blocking spree.  Khane Pass and Dee Smith deserve better coaching than what they have received.  As does TreSean Smith (remember him?) who came back from injury and we have heard little from since.   Talent is here, coaching is not.

These players families deserve better.  I won’t tell you how many messages I get from player’s family members who just need to vent about the state of Louisville football.  Just know that it is a lot.

Some are struggling with not seeing their kid get on the field at all.  Others are struggling because they trusted the coaches who sat in their living room and told a lie about how they would use them.  There are some parents that know more about football than the coaches getting paid to.

Last season, I spoke to one player’s  family member who drove up each weekend to see his son play and even in a blowout win the staff didn’t put him in.  Imagine driving for hours to watch your son never put his helmet on.  Or think about your son getting embarrassed on national television because the staff doesn’t have him prepared to play.

This is not a slam piece, this is facts-only piece.  I don’t write just for the likes and retweets.  I wrote this because I am a fan just like you. I have seats in the general seating areas just like you do.  I have turned down seats in the press box before because I would rather sit among the fans who worked hard all week and just want to watch some football.   The fans who save $300-400 bucks each year to renew season tickets whether its Clemson coming to town or New Albany.

I can say that the fans deserve better, but you know that already.  This is more about those young men who went through grueling practices in high school and summer camp. The guys who fought hard to come back from injury time and time again. The men who turned down powerhouse colleges and future HOF coaches to come to Louisville.

They deserve better than what they have received.  They put on that Louisville hat, and signed that letter of intent because they trusted the staff would prepare them for success.  As Jordan Travis stated in his interview with fellow blogger Jeff Nunn last week,  “it was not at all what I expected“.

You expect your QB coach to know more than how many yards he threw against St. X back in the early 2000’s.  You expect to wipe your feet on traditional ACC doormat’s, not become one.   You expect your head coach to actually help you get better in practice, not just use that as an excuse in his weekly presser.

You deserved better, and I hope that after that last game on November 24th, you get it.

You, being the players on the 2018 Louisville football team.