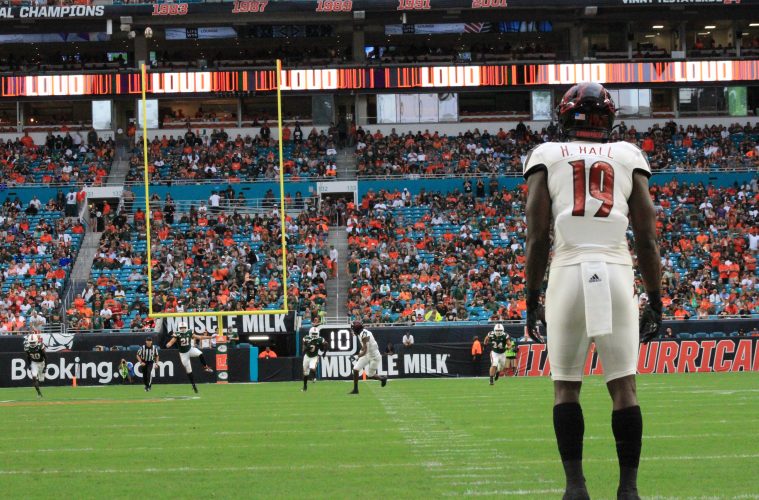 RECAP: Hurricanes Force Past The Cards 27-52

Statistics do show that there truly is an advantage to playing at home. Perhaps the Homecoming Game, as it was in Miami today, would thus instill an even greater advantage. But the greatest given advantage for the Miami Hurricanes was the slew of penalties, mental mistakes, and unforced errors by the Louisville Cardinals. With bowl eligibility on the line, and in front of a great showing of support from Card Nation, the Cards managed to bumble and stumble their way to a 27-52 defeat at the hands of the ‘Canes.

Rather than looking like a refreshed and relaxed team coming off the bye, the Cardinals appeared to be covered in rust and and a lack of readiness. A team that had been averaging just over six penalties for 51 yards per game managed to give up 83 yards on 10 penalties in the first half. The Cards would give up 121 yards on 14 penalties by the final whistle, while the Hurricanes would commit just five for 55 yards. Many a Louisville fan would, perhaps rightly, dispute the fact that Miami committed five penalties. But Scott Satterfield, in usual fashion, could only talk about discipline post-game. This despite several instances of long and animated conversations with the officiating crew throughout the game, most notably as Micale Cunningham lay injured at his feet.

That injury, and others, were the salt in an already festering wound. Dorian Jones was hobbled and led off after an early knee injury during first half return coverage. It was the freshman’s first collegiate play. Mekhi Becton, so critical on the line this season, went down hard and tossed his helmet away in frustration as trainers tended to his injured right ankle. In the second half, Khane Pass was taken out by a teammate as Miami’s Michael’s Harley scooted by for an easy touchdown. And as mentioned, Micale Cunningham limped off after slipping on wet turf before being pummeled after the whistle by Miami defenders. Tutu Atwell nearly joined the ranks of the wounded but returned to finish the game, although he will be assessed throughout the week.

But in order to salt the wound, the wound must be opened to begin with. The knife that cut the deepest in Miami would prove to be the Cardinals defense. Countless times throughout this season and the last, the defensive effort has left much to be desired. Allowing over 400 yards per game and 31.9 PPG is not the greatest recipe for success. Against Miami, the expectation was for a fight similar to Virginia two weeks prior. Instead, the Hurricanes were presented with an opportunity to put on an exhibition.

Jarren Williams, with 10 passing TDs in nine games this season, managed six TDs on the night (setting a single game record) and 253 yards to best his 181 YPG average. Missed assignments, busted coverage, Cardinals taking out other Cardinals…. If Louisville missed any method of hobbling themselves, you’d be hard pressed to find it. The Hurricanes had been averaging just 22.3 points per game against FBS opponents, with a high of 35 against Virginia Tech. Their 52 points tonight nearly matched their total from a 63-0 win in week two…against FCS Bethune-Cookman. Suffice to say, it’s never pleasant to get walloped by the 10th ranked offense in the ACC.

Moments of hope were to be found, however, in the performances from Javian Hawkins and Tutu Atwell. Hawkins was just nine yards short of another 100-yard performance, and indeed just 12 yards short of his 1,000th career yard before petering out late in the already decided contest. Atwell, as always, showed why Gunter Brewer’s small but speedy philosophy is worthwhile. But whereas the Cardinals offense had somehow managed to find the points against Boston College, Wake, and Virginia, too many miscues and missteps prevented the same in Miami. There is no doubt that the loss of Mekhi Becton altered the dynamic on the line, but even before his departure the Cards seemed jittery and easily spooked. While Becton has sworn to return next week, it will be up to the team doctors to decide.

After riding a high tide from performances against Wake Forest and Virginia, it’s impossible not to crash a bit hard after such a deflating defeat. Mental mistakes, missed assignments, and miscues have been a part of this team since the 2018 season, but to see them return in such volume is frustrating. As always, Scott Satterfield remained positive after the game, and almost maddeningly so. His hopes that his team will learn something from the disappointment in Miami is fitting, but now seems fanciful. The Cardinals no longer have a bye week to correct mistakes and heal.

Louisville travels to NC State next week, once again in search of bowl eligibility. The loss of so many players to injury is worrisome, especially given the critical nature of the particular individuals involved. But most worrisome is the continued dearth of defensive prowess. Scott Satterfield can only rely on his offense to a certain point before some amount of defense steps in to plug the gap.

As the Cards leave Miami, they leave with more questions being asked then answered. But remember, they’re still playing with house money. Three games to go, one win to get.