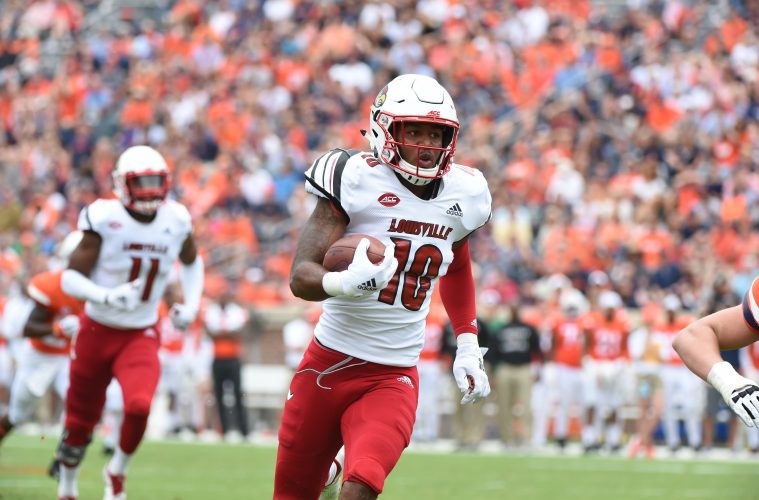 Hey Card fans, welcome to another edition of Biscuit’s Keys to Victory. I know this season has not been what we had hoped for, but it’s only September and there’s a lot of football left to be played. This weekend presents another opportunity for the Cards to right the ship, as conference foe Florida State visits Cardinal Stadium. Louisville is riding a two game win streak over the Noles, who might be the only team in the ACC more disappointed with their start than the Cards. UofL is looking to extend the streak to three and avoid an 0-2 start in conference play. I can’t stress how pivotal this game has become, as both teams are at a crucial point in their respective seasons. Especially Louisville. If the Cards drop this game, it’s hard to see more than one or two wins remaining on the slate.

1. Establish an offensive rhythm: This isn’t dissimilar to the sentiments I have expressed the last few weeks, and that’s not an accident. I don’t care if our offense is predicated on a strong running game, or a West Coast style short passing attack, or the read option. The offense needs an identity and needs to keep the defense off the field. Sustained drives are going to be key to pulling out a win on Saturday. The defense, while not perfect, has mostly held up their end of the bargain, showing improvement in most areas. But inevitably they wore down against UVA. Early, sustained drives (and some points on the board) would be nice.

2. Trench Warfare: Both Louisville’s and FSU’s struggles on the offensive line have been well documented. OL Coach Mike Summers promises the unit has looked better in practice this week than they have all year. I hope this is true. I still believe in the talent of this unit, but I want to see results before preaching that gospel any more. To this point, I have seen passive, indecisive play, and lack of recognition on some protections. FSU’s defensive front is big and experienced, but not elite. It’s an opportunity for the offensive line as a whole. On the other side, FSU’s offensive line remains a mess. The Cards have to get pressure on passing downs without heavy blitzing (too many holes on the back end) and limit Cam Akers and the Noles’ rushing attack. It’s a big week for the hogs.

3. Get Vertical: It’s a lot to ask for a team that’s had a hell of a time generating any yards at all, but this offense has to figure out a way to get the ball to their receivers down field. A lot has been made of the WR corps’ rough start (and it’s all vaild), but some of our best weapons haven’t been given the opportunity to shine. Some of it is lack of protection (at times, but the line has been serviceable in pass protection), and maybe a lack of confidence from the QB position, but as a team I believe we threw the ball past ten yards a total of three or four times against UVA. Dez Fitzpatrick has had minimal targets, and Seth Dawkins has stretches where I’m not sure he’s in uniform. Not to mention our inability to get the ball to our speed guys in space (Tutu Atwell, Hassan Hall, etc). Our playmakers have to be given the opportunity to make plays. We need to take the top of the defense and open up the underneath routes and running game.

4. It’s All Mental: There’s a theme throughout the Louisville season to date, and that is an abundance of mental errors. From throwing in to triple coverage, kneeling the ball on the one on a kickoff, losing receivers in coverage, too many men on the field penalties, DIVING OVER THE LINE OF SCRIMMAGE FROM THE THREE YARD LINE LIKE YOU ONLY HAVE A FOOT TO GO, and so on, and so on…UofL hasn’t been able to get out of their own way. While the players bear some responsibility, this is a systemic issue. There is a fundamental lack of preparation and game readiness. That’s on the coaching staff. Their overall lack of preparedness leads to the silly procedure penalties, and a lack of staff confidence in their decisions (constant lineup shuffling, lack of identity). Preparation leads to engagement, engagement leads to confidence, confidence leads to effort. Louisville isn’t going to win many games making mental errors. We don’t have the overwhelming talent or transcendent player necessary to overcome them.

5. Avoid the Injury Bug: This isn’t necessarily something the team can control, but it’s a key to victory nonetheless. Jon Greenard, Dorian Etheridge, Dae Williams, Dee Smith, CJ Avery, London Iakopo, etc have all missed time or are out for the foreseeable future. While some young players have stepped up and thrived in new roles (Robert Hicks, Jarrett Jackson), we can’t afford to keep losing experienced pieces. Thankfully Dorian Etheridge appears to be healthy and ready to play, but health is paramount moving forward.

– I’ll be keeping a close eye on the true freshmen. Bobby has elected to use the new four game redshirt threshold in the first third of the season, as a kind of rehearsal. Some players are clearly going to burn that redshirt and be contributors for the rest of the season (Hicks, Jackson), while others are borderline. A player like Demji Dumervil-Jean, who is huge and has potential to be a force down the road, is a step slow off the ball and has been moved off his spot by the veteran centers and guards he’s faced. It may be wise to sit him and let him retain his four years.
– Will Jawon Pass solidify his starting position? Or will the questions persist? This team has myriad problems but this looms largest. After looking by far the more productive of the two options, Malik Cunningham stalled against Virginia. Somebody has to take this job, or Bobby might look to Jordan Travis before the end of the year (correction: end of the game).
– The Crowd. Are y’all gonna be there? I’ll be there. No matter how bad we’re playing, there’s always beer and friends. Plus it’s a massive recruiting weekend for Chris Mack and the basketball team. Always good to show recruits what the fan base and city are all about.
– The Offensive Line. Because of course I am. I haven’t completely sold the farm on these fellas. They’re too talented to perform this badly.
– The Sideline. I’ll be watching the level of engagement from the coaches and the players. Whether they show mental toughness in the face of adversity or if the cracks in the foundation are clear. The team had a players-only meeting, which usually means they’ll rally and it’s going to get better, or it’s already too late. We’ll find out which is true.
– My Twitter feed. I am in and out during the game, but if you are tagging players after the game and putting your frustrations on them, I will call you out and/or block you. It’s bad form and never acceptable.
– Mason King for Heisman.

I would like to say that the Cards get it all figured out this week. I would like to say I expect wholesale improvement. But I don’t think that’sgoing to happen. The problems we have seen over the last few weeks are not easy, one-week fixes. I do think the foundation is starting to crumble, and I don’t have an easy answer. I hope I’m wrong. I hope that a struggling Seminoles team is just what the doctor ordered. Alas, I see signs of life in Tallahassee. DeAndre Francois looked good last week (albeit against Northern Illinois), and the young players seem to be starting to buy in a little bit in to what Willie Taggart is selling. FSU has talent and speed all over the field, and I expect that one of these weeks it’s going to click.

And beyond everything else, I am just not sure we can score. FSU is an average defense this season (ranking 69th in the FBS in total defense), but we have a way of making average defenses look extraordinary. Couple that with an FSU offense that has a veteran quarterback in Francois and appeared to find its footing against Northern Illinois, and it looks like a loss. Head wins over heart for me on this call.

The good news is I am trash at predictions. Here’s to me being wrong (again)! As always, if you see me out and about, holler at me. I am always happy to share a beer and a laugh with fellow Cardinal fans.