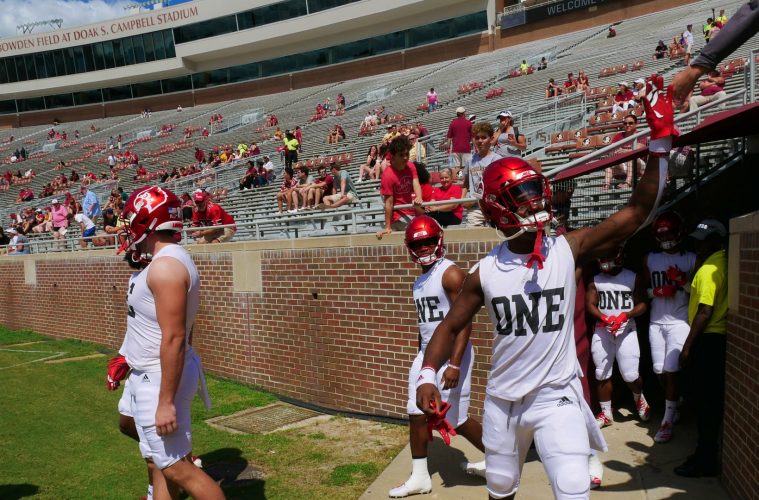 What was is what was, and what could be is what could have been. Long gone are the days of the Louisville Cardinals suffering complete collapse early into long and dismal games. Long gone are the recriminations and in-fighting. But what lingers is the back-beating and questioning as the Cardinals tried, and failed, to overcome a 21-point first half deficit.

The similarly lingering summer temperatures had tempers flaring even before the coin toss at Doak Campbell. Pregame walk-through activities featured a heated discussion at mid-field that resulted in a police presence until both teams retired to their respective locker rooms. But as play began the fire was limited to the Seminoles and Chief Osceola’s flaming spear.

Whatever momentum the Cards had coming off their performance in Nashville was quickly released into the aether and quickly absorbed by a charging FSU offense. Louisville won the toss, deferred, and was immediately punched in the mouth with a dominant drive down the field led by James Blackman. But the tale of Willie Taggart could not play on without a little bit of frustration as the Cards stopped an ill-advised fourth down attempt by FSU.

Yet when opportunity knocked the Cardinals would repeatedly ask it to come back later. The Seminoles’ second drive picked apart the Louisville defense as Cam Akers and James Blackman drove down the field on an eight play, 73 yard touchdown romp. Rodjay Burns saw fit to answer with a 100 yard kickoff return, but the Cardinals found themselves pinned back after a questionable block in the back penalty.

Mistake after mistake would follow in a demoralizing first half. A flubbed kickoff, a scrambling quarterback, dropped passes, and missed tackles. The meager assemblage of FSU fans were being treated to a dog-walking and it seemed neither the Cardinals offense, defense, or special teams had the right response. But to the delight of UofL fans in Tallahassee and at home the Cards would once again set out to prove that the past was in the past and that they refused to be cowed.

As the defense picked up, the offense began to find its stride while managing to sneak in a surprise or two. When things seemed the darkest a fake punt sparked life as Tabarius Peterson went nine yards to continue the drive. Three shots at the end zone would finally find Tutu Atwell in the corner, and the Cards were on the board. The ensuing joy was nearly squashed went into a prevent defense as the last minute of the half ticked away, but FSU’s Ricky Aguayo missed the second of his three missed field goals as the second quarter expired. Despite all earlier indications, the Cardinals had life going into the locker room down by only 14 points.

Coming out of the locker room found the Satterfield’s squad running with a good head of steam as FSU began to collapse as they have twice before this season. The Seminoles had outscored opponents in the first half by 60+ points including Saturday’s performance, but found themselves lacking by nearly as much in the second half. FSU seemed ready to gift wrap and present a win to the eager Cards as fumbles, missed field goals, and clearly exhausted Seminoles began to drop due to injury.

As for Louisville, theatrics abounded. Malik Cunningham seemed to have found his rhythm with a few gorgeous arcing passes to Marshon Ford, Tutu Atwell, and Dez Fitzpatrick. As Dez collected a tipped pass and turned it into a 74 yard touchdown it was easy to sense the total dread creeping over the FSU fans. With Willie Taggart’s buns already situated on the hot seat it seemed time to start having some frank discussions about the future in Tallahassee.

The thing about tides is they have a tendency to ebb and flow. Just over that crest is a yawning chasm, plunging towards destruction. When the Cards seemed ready to deliver the killing blow, the Seminoles picked off Malik Cunningham’s pass across the middle, and hope sprang up again in Doak Campbell. Everything from there was a regressive slide as UofL clawed desperately to salvage what had minutes before seemed an assured win.

James Blackman had earlier gone down with an apparent leg injury, but R-Sr. FSU QB Alex Hornibrook had already been announced as a likely participant. He accepted it with gusto, finding the end zone twice including a deep ball to Tamorrion Terry that put the Seminoles back on top. Even when the Cardinals had a chance for the storied two-minute drive, they found a way to squander it. Two critical penalties included a roughing the kicker that kept an FSU drive alive, allowing Cam Akers to punch it in to end Louisville’s hopes of victory. A dejected Cardinals team left the field as the scoreboard at Doak Campbell read 24-35 in favor of the home team.

And now, the question becomes, “What’s next?” While not essential, this game was certainly a critical win if the Cardinals hoped to earn a bowl bid. A bye week awaits that will hopefully allow the Cards to rest, recover, and reset. The recovery component may be the most important, as post-game it was reported that Malik Cunningham had experienced a foot injury. There was no word on the specifics, so we’ll have to wait to hear more on that. While Evan Conley proved himself capable, the Cardinals do not need to find themselves relying upon Tutu Atwell as a backup option regardless of his skills.

The bye week awaits, and the Cardinals return to Cardinal Stadium on October 5th to face Boston College. Who will be the quarterback? And which team will Card Nation see take the field? Whether it’s the bruised or the beaten, it’s clear that the missed opportunity in Tallahassee leaves little time for rest.