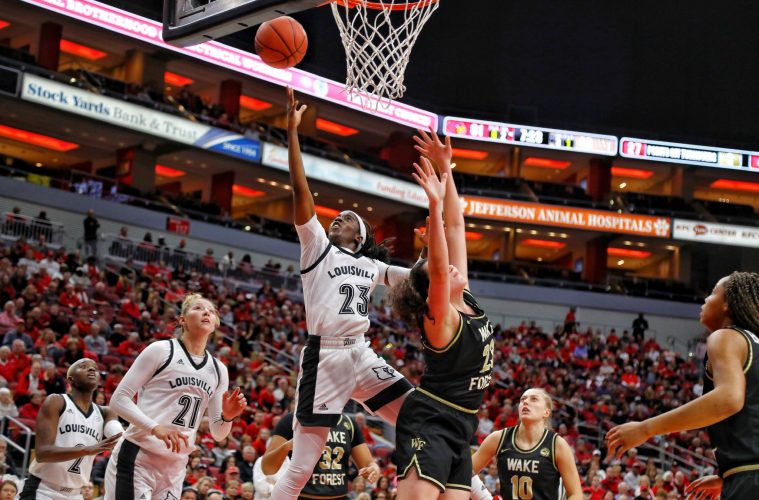 Cardinals women’s basketball took to the court at the KFC Yum! Center on Sunday afternoon bedecked in their Muhammad-Ali themed uniforms, ready to face a resurgent Wake Forest. The Demon Deacons, despite returning an essentially identical roster, have exorcised the 1-15 conference record from last season with a hot 3-1 start. As such the Cards were expecting a fight, and they got one. But a stellar defensive first half and offensive fireworks from Dana Evans and Jazmine Jones was enough to give Louisville a 75-61 victory to improve to 5-0 in ACC play and 16-1 overall.

Jeff Walz, forever promoting the women’s game,  is fond of talking about how nobody wants to watch a basketball game where the score is 50 to 50. Despite this the Cardinals are perennial defensive juggernauts, and those skills were on display Sunday afternoon. A Wake Forest team averaging just under 70 points per game was held to just nine first quarter points and only 23 in the entire first half. Much of this was thanks to a hot offensive start that allowed the Cardinals to set up a killer ¾ court press. Asked if this would be a regular feature for Louisville, Walz stated, “It’s game by game. Against Miami on Thursday night, if we had tried that, they would have made a 100 layups.”

That definitely wasn’t the case against the Demon Deacons, who struggled mightily. Two 10-second backcourt violations were two of Wake Forest’s 12 first half turnovers. The Cards aggressive posture created six steals and three blocks, with 21 of 38 first half points coming from Wake’s turnovers alone. Co-leading scorer Ivana Raca was held scoreless, while the Demon Deacons were prevented from ever seeing a free throw opportunity thanks to Louisville’s discipline that committed only four first half fouls.

But one thing Wake head coach Jen Hoover can count on is that her team is not one to complain, or throw in the towel. “They give me everything they’ve got, every time they walk on the floor…I couldn’t ask for anymore.” And that’s exactly what the Demon Deacons did in a stunning third quarter that temporarily had the Cards on their heels. A 23 point first half was followed by a 24 point third quarter. Junior forward Ivana Raca, who had been held scoreless in the first half, rocketed out to a seven point third quarter on her way to 16 total in the second half to finish as the top Wake Forest scorer.

While credit is due to the Wake Forest offense for aggressively attacking the basket in the second half, much of the blame can be placed on a weakened Louisville defense. Per Walz, “We held them to nine, and fourteen, and then we gave up 24 in the third quarter. Defensively we just weren’t very good.” Perhaps some of that can be attributed to a Louisville offense that stalled, preventing the Cardinals from setting up the same defensive sets that had proved so effective in the first half.

Post-game, Dana Evans attributed the troubles to Wake Forest’s dynamic defense. “They’ll go man, then they’ll go 2-3, and it took us out of our flow.” But an undoubtedly key factor was the Deacons’ dominance on the glass. Several sequences featured good post defense from Louisville that prevented baskets but failed to produce rebounds. For a time, Wake Forest was thriving on second chance points. It’s not often that a team is out-rebounded 42 to 32 and gives up 15 offensive rebounds but still wins by 14 points.

Despite the third quarter setback, the Cardinals were able to settle and find an offensive spark thanks to Jazmine Jones. Jones was held scoreless in the third quarter but rattled off 10 in the fourth quarter on here way to an 18 point performance that featured some impressive, Sportscenter-worthy highlights. Jaz now has five consecutive double-figure games since coming back from the holiday break, and shows no signs of slowing down.

Dana Evans once again impressed with a 20 point, nine assist, three steal performance that led all scorers. Under Evans leadership teh Cards put together another game of good ball handling, limiting themselves to just nine steals. And while the referee’s whistles blew for 14 second half Louisville fouls compared to just four in the first, Jeff Walz wasn’t convinced it was all due to sloppines. “I didn’t think [it was sloppiness]; I’m not sure what took place a few times there in the second half. Yeah, it was quite interesting…I can’t even explain it, so I don’t even try.” And while not showing the degree of consistency that Walz might like, the Cards are certainly showing the ability to put together a total team effort.

In that vein, Evans and Jones were both quick to credit Bionca Dunham, whose stat lines may not be impressive to the uninitiated. Evans stated, “Bionca does the things that don’t really show up on the stat sheet…boxing out, keeping her man off the glass,” with Jones adding, “Bionca is a key part to our team…people who don’t know basketball wouldn’t understand it.” As for each other’s performance, as Evans and Jones sat down for post-game duties Jaz jokingly remarked, “Dana taking all the assists!” with Evans smiling as she replied, “Yeah, I know. I should have had more.”

Louisville women’s basketball is back in action this Thursday at Boston College. While the Golden Eagles are now 2-3 in conference play after losing today to Virginia, the Cardinals move to 5-0 and firm control of the top spot in the ACC.