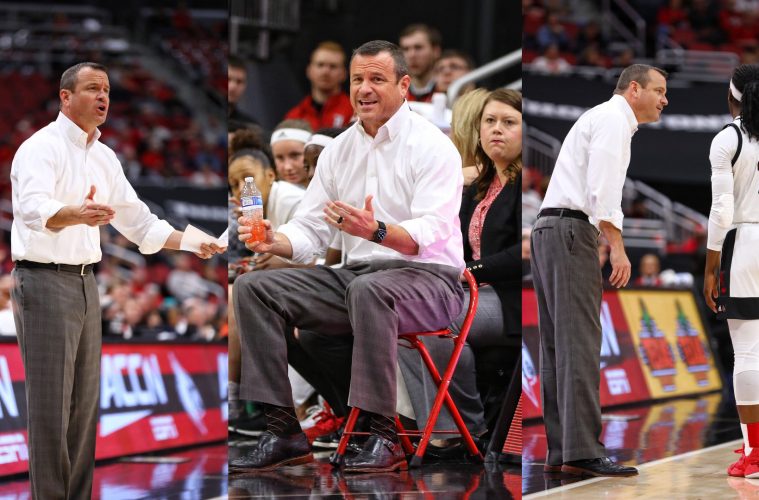 They say that to win, it is sometimes necessary to make sacrifices. Louisville Cardinals women’s basketball is definitely winning. A 71-56 victory over the Virginia Cavaliers gave Jeff Walz his 350th victory while improving Louisville to 19-1 overall and 8-0 in ACC play.

As has become tradition, the necessary sacrifice for securing victory was 10 minutes. Not a hefty price to pay, but certainly disconcerting. The chosen victim this game? The third quarter.

As Dana Evans put it succinctly after the game, “We just have to learn how to put four quarters together.” Evans’ stat line once again impressed with 21 points, three assists, three steals, and six rebounds. Her three first quarter three pointers were coupled with two from a wide open Kylee Shook as the Cardinals rocketed out to a 25-13 lead.

Virginia did, for a time, hang close as shots were falling easily for both teams. Freshman guard Carole Miller averages just 4.4 points per game for the Cavs but managed six in the first quarter as Virginia moved the ball well and found gaps for penetration into the lane. But after the first media timeout the Louisville defense solidified, while its offense remained hot. An 18-4 run to end the quarter made things seem to be headed for a quick end.

Bionca Dunham had two quick transition baskets (part of a very strong all around game) to begin the second quarter and things seemed all but assured. Tina Thompson took a quick timeout to adjust and, credit due, the Cavs defense did perform more capably throughout the rest of the game. For the Cardinals, the end result was never really in doubt, but a game that could have been buried in the first half wasn’t completely sealed until late in the fourth quarter. As Jeff Walz said in the post-game, “That’s kind of been our MO this season. We get it up to 20 and we just can’t finish it off.”

The Cardinals were hampered somewhat by a smaller bench. Jeff Walz had reported on Wednesday that Norika Konno would remain benched until at least the USA game on February 2nd. This was compounded by a confirmed flu diagnosis for Jessica Laemmle that also brought down Molly Lockhart. This once again meant big minutes for Yacine Diop and Mykasa Robinson who were joined by Liz Dixon and Lindsey Duvall in the sub roles.

But, as is custom, that 10 minutes of time had to be paid like a pound of flesh. Jaz Jones had been quiet in the first half thanks to two fouls that, as Walz put it, were reminiscent of her struggles in December. Her first points of the game came early in the third quarter along with a basket from Kylee Shook before the Cards went cold.

The Cavaliers that had seemed to be on the ropes found new life in an 11-1 run over five minutes of the third quarter. Louisville went a full seven minutes without a field goal before Jaz managed a basket and a foul to put some energy back into the Cardinals’ offense. But a 27% shooting performance conceded the quarter to Virginia. While the Cavs would never draw any closer than 10 points the momentum seemed to be shifting away from the Cards.

Several questionable calls in a distinctly physical game seemed to be the juice that Louisville needed to close things out. Two quick Virginia turnovers gave an inspired Dana Evans two easy transition buckets and Jeff Walz felt comfortable enough to rotate his backups back into play to finish things off.

As Walz would point out, his team is at it’s best when moving and at it’s worst when stagnant. This was compounded by sloppy play that led to an uncharacteristic 15 turnovers for the Cards. But despite the questionable stretches the overall performance was more than adequate.

Kylee Shook had seven blocks, just one shy of her career high. Virginia’s extremely downhill style of play was only partially successful with Shook and Dunham to contend with in the post. Jocelyn Willoughby performed ably with 17 points but it was freshman Shemera Williams that led the way with 20 points. Virginia was held to just below their average of 59 points per game.

The Cardinals are back in action on Sunday at 4:00 p.m. in the KFC Yum! Center against a truly awful Pitt team and barring disaster will remain undefeated in ACC play. Asked about his 350th win tonight, Walz was magnanimous with a dash of his usual wit in terms of where credit is due.