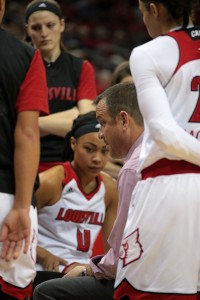 The Louisville women’s basketball team is set to face the Clemson Tigers in the second round of the ACC tournament.

Clemson defeated Virginia Tech Wednesday afternoon, 67-66 (a free throw) to advance to meet the Cards on Thursday at 11am.  Danielle Edwards led the Tigers (15-15) with 17 points. Nelly Perry added 16 points and Aliyah Collier tallied 10 while Jaia Alexander grabbed 10 rebounds.  Clemson had lost four in a row prior to the meeting with the Hokies.

In the first meeting between the Cards and Tigers, Louisville won 60-48 on the road.  The Tigers lost 8-9 games in the month of January, Louisville being the last one.  In the regular season game, the Cards got off to a slow start..  Asia Durr, the team’s top scorer at 17 points a game, hit two 3-pointers in the game’s first 11 minutes, then was quiet for long stretches and finished with 13 points.  Her scoring partner, Myisha Hines-Allen, had just three points in the first two quarters before heating up…  she scored 13 in the second half.  Kobi Thornton and Aliyah Collier had 10 points apiece to lead Clemson. Collier had 11 rebounds.  Clemson was able to pull it within 6 in the 4th quarter but that would be all. It was that game that Hines-Allen would reference this very matchup.

“We have to get better with that because once we go further into the season and the ACC tournament, we can’t have those slow starts because when you get to the tournament, it’s one and done,” Hines-Allen said.

What stands out to me, is that, Louisville has reached further in their bench for more scoring options and minutes on the floor by freshman in its last couple months.  Today, Kylee Shook is averaging a quarter of play, Sydney Zambrotta almost 7 minutes, Jazmine Jones almost 16 minutes, Ciera Johnson almost 12.  In the January matchup, Shook played for 9 min, Sydney 2, and Jazmine is getting 4 more minutes on the floor and the only 3 points coming from Shook.  **Also note that Brihanna Jackson should not return due to that back spasm issue until the NCAA tournament. **

What also stands out to me is Louisville was out rebounded 39-34.  Today Louisville averages 42.5 rebounds per game holding opponents to 35.  Make your free throws, ladies.. that’s what got Clemson to round 2.  ALSO, don’t forget where Clemson resides… South Carolina.  Just a 4 hour trip for Tiger fans to the arena. Then again, Louisville was on the road last time too and they returned victorious.  With a deeper established handle into the bench now, than they did then… this could get ugly. Real quick.