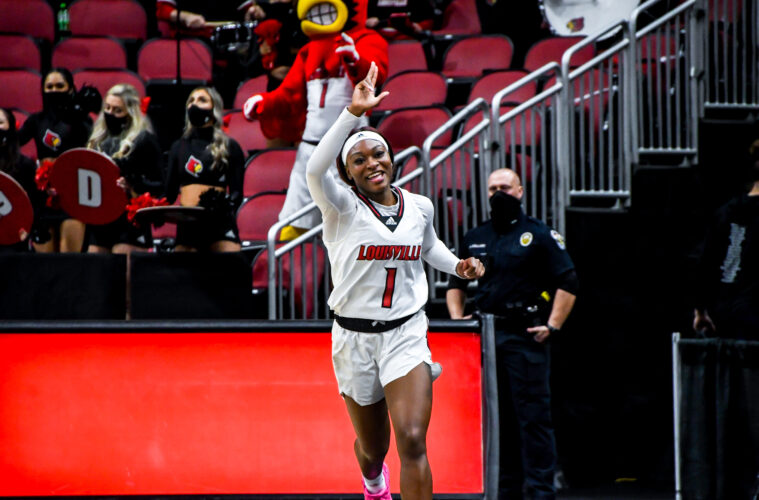 It marks the fourth straight year that the conference’s top honor has come from the Cardinals program, as Louisville joins Duke as the only two programs with the ACC Player of the Year in four consecutive years.

After earning the league’s ACC Player of the Year honor last season and being selected as the 2020-21 Preseason Player of the Year, Evans leads the conference in scoring with 21.0 points per game and has tallied 17 20-point games in 23 contests for the Cardinals this season. Her scoring average is the sixth best for a player in a Power 5 Conference.

Evans has scored in double figures in all 23 Louisville games this season and 40 straight overall, which is the longest streak at UofL in the last 20 years.

The senior has been terrific from the free throw line, connecting on 93.8% of her attempts to lead the ACC and rank second nationally.

Robinson, who had five charges on Sunday at Notre Dame and drew 19 charges in 16 ACC games, is the first UofL player named to the All-Defensive Team since Jazmine Jones and Kylee Shook both earned the honor last season.

Cochran and Van Lith, who both rank in the top six among ACC freshmen in points and rebounds per game, are the first Louisville players to earn All-Freshman honors since Evans did so following the 2017-18 campaign. Louisville is the only program with two players on the All-Freshman Team.

After claiming its fourth straight ACC regular season title, No. 5 Louisville (21-2, 14-2) will be the 1-seed in the 2021 ACC Tournament in Greensboro, NC. The Cardinals open play on Friday, March 5 at 12 p.m. against either 8-seed North Carolina or 9-seed Wake Forest.