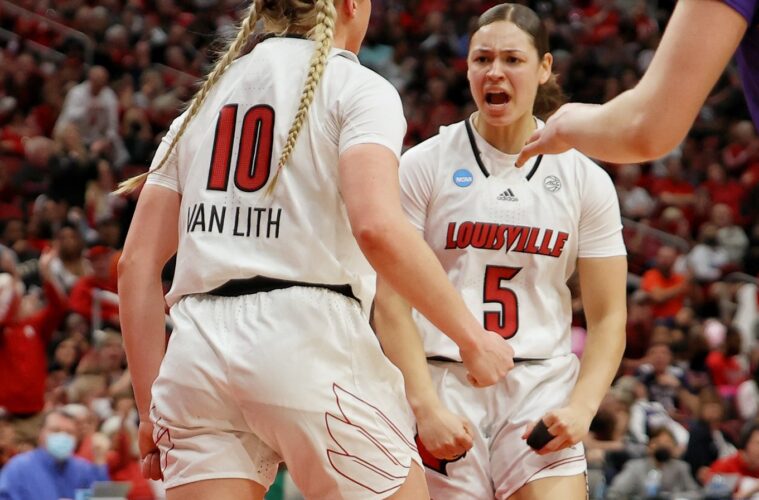 The 1-seed Louisville Cardinals started their tournament run with an 83-51 victory over UAlbany.

Electric. That’s what the majority of the first half was like for Louisville as they outscored UAlbany 48-20. Emily Engstler found herself in foul trouble again but that didn’t stop her from setting up another well-balanced game for herself. She went to the bench with 6 points, 4 rebounds, and 6 steals which were a driving force for the incredible defense the Cards were playing in the first half. On the offensive end, Louisville came out hot, went cold, and then Hailey Van Lith decided the Great Danes would not go on a run again in her house. The sophomore had 17 first half points with 15 of those points coming in the second quarter after UAlbany went on a 9-0 run. Kianna Smith came out on fire with two three-pointers less than two minutes into the game. She was right behind Hailey in scoring with 15 first half points.

The second half gave us offensive Emily Engstler who added 11 points to her total and with that, joined the 1K point club. We also got a Norika sighting in the second half as she was welcomed back. This was her first time playing on her home court since early in the season. We also saw playing time for Russell and Parker in the second half, who had 3 points each. Louisville did allow UAlbany to score 31 of their 51 points in the second half but were still dominate on the boards with 22 of their 33 rebounds happening on the defensive end. The biggest concerns I had tonight were found in Louisville’s rotation who did not seem as consistent as they normally are. They allowed the Great Danes to score more than I feel comfortable with.

This was an excellent game for Louisville overall. Look at the stat lines if you don’t believe me.

The Cards will host 9-seed Gonzaga Sunday for a second-round game. Should they advance, they’ll head to Wichita for a third-round game to face either Oregon, Belmont, Tennessee, or Buffalo. All of which are playing their first and second round games tomorrow and Monday, respectively.