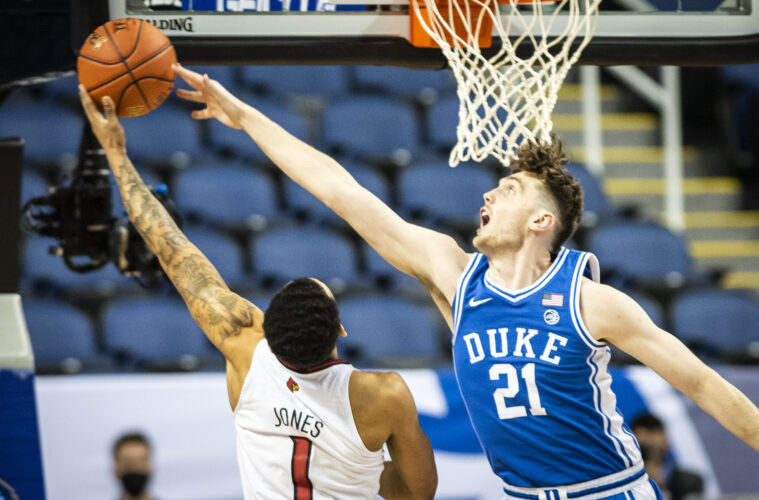 CHRIS MACK: Give credit to Duke. They played extremely well. They made some really good adjustments from the first couple games. Going in, they really stymied our offense and never could get us in a place where we felt comfortable. I thought we got a lot of open looks from three. They completely packed in the lane. They’ve got a seven-footer that’s hard to score on in and around the basket, and our inability to sort of convert some of the open looks that we had just crushed us on the offensive end.

I thought we battled on the glass, get 14 offensive rebounds, but we had a tough time with their front court. Hurt and Williams are huge. Matt obviously has got a special skill. But Mark Williams did way more damage than he did in the two previous games. Could not keep him off the offensive glass, and he played like a seven-footer that’s a pro. Just a really, really tough challenge.

Disappointed, and yeah, that’s about it.

Q. Why was it that — did you feel like Williams — obviously his length, but in the first half, he got a couple of put-backs that seemed to be without guys kind of putting a body on him. But then as the game went on, you were blocking them out and he was still getting them. Why was that?

CHRIS MACK: He’s gotten better as a player. We didn’t do our job nearly to the level we needed to against a guy that has really good hands, is extremely long, was not in foul trouble all night so he wasn’t coming in and out of the game. You know, he’s a tough cover.

I think with any good player, if you sort of let them get going — I shouldn’t say “let them.” He battled for it. Mark Williams battled for it, so give him credit. But to not have the heightened sense of pushing him really far away on a block out, really digging in your heels when he’s trying to put you up, pushing him off the lane or pushing him behind the glass on a high-low. Like if you’re really not locked in and he gets a couple baskets and now he starts feeling himself and feels like it’s his game. And I think that’s exactly what happened, along with his major improvement that he’s made all year long.

Q. You had a 16-0 run to take the lead late in the half. They got the three-pointer at the end. You guys were back in it and showed a whole lot of energy and a lot of life, and then it seemed like you came out in the second half without that energy. Could you explain kind of why they came out maybe not as energized?

CHRIS MACK: Really, really frustrating to pinpoint. I don’t know if we could have had a more singular message than just that at halftime, to make sure that the first four minutes of the second half had the same spirit and same energy that crawled us back into that game. And to not have that — I’ve got some really young guys that have not been through the battles that just absolutely learned the hard way. Just really frustrating because that’s really all our message was about.

We talked a little bit about them switching some things defensively, but the majority of it was like, hey, listen, we need to get in stances and we need to battle like we did the last five or six minutes of the half. And whether it was our errors on the offensive end, we just did not have that same spirit to begin the half, and it’s really, really disappointing.

Q. With that said, JJ’s three cut it to eight. I think it was just under five minutes or five and a half minutes, and then you had two chances where you could have cut it even more and you got a couple good looks but at that point they just didn’t go in. I think Dre missed a lay-up and then you missed a three-pointer.

And then on the defensive end, we can’t tie — whatever happened on the offensive end, we can’t show that lack of tenacity because that gets us out in transition when we get stops. And I thought that that did not happen in the second half, and it’s why we’re not advancing.

CHRIS MACK: A lot of the same things that we just addressed, you know, the coming out of halftime, the fact that if that happens again, that will be — pack your bags, the season is over. The next game is the last game if you don’t bring it like we did, like a maybe stretch of seven minutes at the end of the first half.

But give Duke credit. They played like their life was at stake, and I didn’t think that we gave poor effort, but we certainly didn’t step up to that level that we needed to.

Q. It felt like at least until the 16-0 run in the first half and then the start of the second half, you were very hesitant on offense, guys were kind of second-guessing things. Did you see the same thing?

CHRIS MACK: Well, what I saw was us being bothered by — they switched every screen. They’ve played I don’t know how many games, 24 games? So on game 24, they decided to make the adjustment of switching every screen. You know, that bounced us on our heels. We just did not adjust on the fly well enough, myself, our players in the huddle, at halftime. And then we let that affect our defensive fortitude, our defensive energy, like I talked about.

CHRIS MACK: Yeah, that’s not a magic potion. We’re missing lay-ups around the basket to start the game. I mean, we can’t draw them in the basket. We’ve got to be able to finish through contact. We get an alley-oop to start the game. It’s wide open, we’re on a roll, and we come down and miss a one-footer. We get a great drive to the basket on an action that we run, and we have a lay-up and we miss it.

So it’s frustrating, you know, but that seems to happen not just the beginning of games, it happens a lot through. For us to be successful, we’re going to have to be able to score through some contact and make a few more open shots.

Q. Joe Lunardi says you may now slip down to the last four in. The NCAA Tournament is your next outing, so I guess what’s your argument or what would be your response about why your guys belong in the dance?

CHRIS MACK: I don’t worry about making my case. I mean, we played one of the hardest schedules. We’ve been on two COVID pauses. If the net — if that includes margin of victory, two of our blowout losses were after we took multiple-day pauses coming off COVID on the road.

It is what it is. I think we’re certainly capable of winning games in the NCAA Tournament given the opportunity. I think we’ve done enough to earn it, but I’m not in that room.

Q. Williams didn’t play in the first game between the two teams and didn’t start in the second one. Were you able to adequately prepare for him given how much he’s improved?

CHRIS MACK: Yeah, I mean, like we know they like to go to him. I thought our post defense on him wasn’t bad, but our pick-and-roll coverage, which has been pretty good all year, and then our inability to keep him — he had seven offensive rebounds. A couple of them landed in his hands that I thought we had our hands on, and he catches anything in that charge circle. He’s got a great touch, he’s dunking the ball. You know, he’s come a long way. I didn’t see him in the beginning of the year in practice, but I mean, he’s huge. We’re battling with a few young guys that didn’t quite get the job done today.

Q. It’s hard to beat a team three times, but what did you think was the biggest difference for you guys tonight compared to beating Duke twice before the season?

CARLIK JONES: I think the first two times we wanted it more. I think we came ready to play, and I think today, kind of like what our coach said in the locker room, they treated this game like a championship and they competed for all 40. They came into the game locked in, and we kind of played the game today in spurts. When you play like that against a good team, it doesn’t always work out for you.

Q. Great run to end the first half, Coach Mack just said the message during halftime was duplicate that kind of energy, but it wasn’t there to start the second half. Is there a way to explain where it disappears and why it takes so long to kickback into gear?

Q. Obviously they were playing a little different defensively against you guys this time around, but at the same time, you guys were pretty hesitant for much of the game offensively. Can you kind of pinpoint why that was?

CARLIK JONES: Honestly, I think they kind of switched up the defense, something we really haven’t seen out of them all year. They were just telling guys to stay up, switching and stuff like that. Something we kind of weren’t really prepared for.

We kind of figured out the answer to it. We did sometimes, some possessions we did it and it worked. And it was kind of like an example of what we needed to do, we just didn’t continue to do it. I can’t really tell you why, but we didn’t do it. It cost us.

I mean, all we can do is go watch film, learn from it, and hopefully we can get another chance to go out there and do better.

Q. The first game you played them, Williams didn’t play. Tonight he was a huge force. How much did that affect you guys both ends of the floor, and how do you cope with a guy who has developed that much?

CARLIK JONES: I mean, I think he played well. He’s a big guy, and I don’t think it was just me, but he shocked a lot of us. He played hard. Every second he was on the floor, it’s like he did what he was told. He was in there rebounding, finishing dropped balls, going hard to the glass on both ends, and I think he outworked us. I think he definitely outplayed us tonight.

Q. When you have a game like this where you’re not performing as you would expect in a tournament, is that a matter of maturity? Do you think this is just a young team that hasn’t realized what’s at stake?

CARLIK JONES: I think it does come in with a little bit of maturity. I don’t think a lot of shots were falling for us. I don’t think anybody was hot from the floor or anything like that. That’s where you say maturity, it’s got to come in where we’re just got to find a way, and we didn’t.