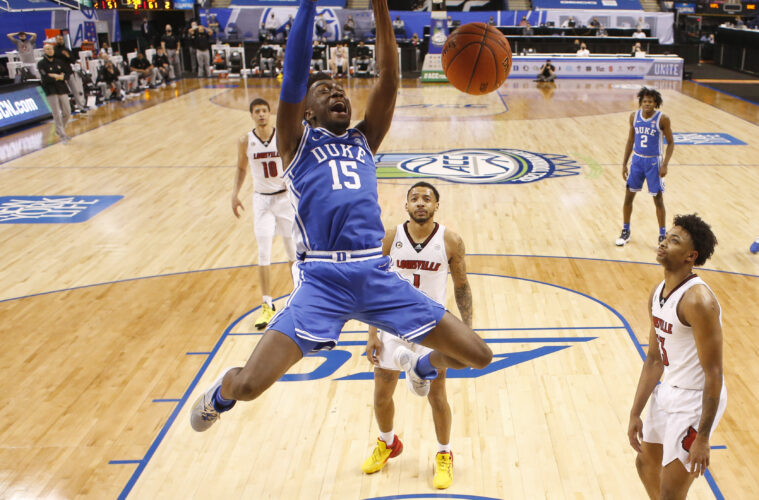 Q. There were a lot of big spurts in the first half of this game by both teams, and then you had a nice spurt to start the second half. What were some of the reasons you think you were able to prevent them from answering with another spurt in that second half and not letting them string anything together after you took control?

MIKE KRZYZEWSKI: Well, you know, I think sometimes when people watch games, they forget that two good teams are playing, so sometimes one good team can dominate for four minutes the other team, and then the other team dominates. That’s what happened in the first half.

Let me just say the end of the first half Jon Scheyer called a really good play, and we got Matt a three in the corner. That was a big play for us. And then in the second half — we just told our kids at halftime, I thought we out-fought them for 12 minutes, they out-fought us for eight, and we’ve got to fight for 20 minutes because they’re such a good team.

So we got off to a great start, but our defense was pretty good the whole night, because even when they made the run, two of those threes — six of those points were transition threes, but our half-court defense was excellent the entire night.

Look, Mark was fabulous, not good. He only had one rebound yesterday, so he’s averaging 10 a game. Just to keep his ego in check. But to get 19 rebounds in a game, and those defensive rebounds in the last eight, ten minutes were the deciding factor in the game, really.

Q. Were his offensive rebounds also pretty important? He seemed to have quite a few where he had like a one-handed put back right up in front of the rim off an offensive board.

MIKE KRZYZEWSKI: You know, he had a great game, an amazing second half. The number of minutes and the physicality of the game — really good players are able to play tired at a high level, and he did that tonight. I thought Matt did, our team did that, but Mark really did that. That was very, very impressive.

Q. I want to talk to you about the defense. Looked like you guys were switching all over the place. What was the key to being so successful? What did the guys do so well?

MIKE KRZYZEWSKI: Yeah, what we did was in the past our program — it’s not zone, but we call it 11. It’s still man-to-man, but it’s a switching man, which really protects the paint. Instead of like trying to put a matchup in or anything like that, in the past we — not this year, but some of our teams in the past we did that, and we decided the best way to try to keep those two guards out of the lane was to do that.

Our guys were able to pick this up in an — they got our game plan in an hour, and they were able to execute it.

Q. I’m doing a story on kind of the big picture in March here, and what does it mean to you and the sport as a whole that there is a tournament this year and you have a path to get there?

MIKE KRZYZEWSKI: Well, everyone has a path to get there. On that path, though, you have to earn the right to play in the tournament. Our sport needs this tournament. It’s really the best sporting event in the United States because it takes up almost — really an entire month because all these — really the tournament has already started because of all the conference tournaments.

In some respects, everybody is in it because some of these one-bid — every team has a chance. That’s not happening.

But it’s the fairest, fairest championship by far. By far. And that’s why it’s pure and it encompasses every part of our country. It’s magnificent. We’ve been fortunate to be a part of it — I don’t know what, 36 times. I hope that answers your question. Probably too much.

Q. Looking forward to Florida State tomorrow, obviously you guys were set to play them in January, so how do you think that game getting canceled so close to tip-off after you guys had already traveled down to Tallahassee sort of adds to the anticipation for the players and the team as a whole for tomorrow?

MIKE KRZYZEWSKI: Yeah, I don’t think that has really any bearing on the game. Really I haven’t watched Florida State, so it’s tough for me to comment on them, but that canceled game — at that time, it was a postponed game. That’s pretty much water under the bridge.

Q. I wanted to go back to Mark because he did have such a fabulous game like you mentioned. You’ve talked about his progression a couple of times in the last couple of weeks, and I’m just wondering was there a singular turning point where you realized things started to click for him, or at what point did you realize that he was capable of doing sort of what he did tonight?

MIKE KRZYZEWSKI: Well, I would like to say that when we first saw him to recruit him, we felt that he was going to be at some time a player of — a high-level player, and then the maturation process of a big guy can take a while. His has sped up in an amazing fashion in the last month, and that all has to do with him and the work he’s doing with Nate, Coach James, and really Patrick Tapé Keenan Worthington and these guys who work with him. He has worked to get there. It’s really on him that he’s doing this.

Q. I wanted to ask you what you did defensively on Carlik Jones down the stretch. Can you just talk about Duke’s ability to keep him from taking over?

MIKE KRZYZEWSKI: Well, one, he’s as good a guard as there is in our conference. I mean, he’s terrific. One of the first things is to get back and not allow transition, which we did a decent job of. But then we just tried to smother the lane. And exaggerated plugs is what we call, you know, plugging from another guy. You would do that somewhat, but today the defense we played was exaggerated.

He still got in there a couple times but not like he has in the first two games that we played against them. He’s terrific, though. Terrific.

Q. Going back to Mark, I remember you said before the year started in November that you haven’t had a player like Mark in a while. What separates him from other bigs that you have on your team and that you recruit year to year? What makes him different?

MIKE KRZYZEWSKI: Well, he’s 7’1″ and has a 7’5″ wingspan. We start off with that, so that really makes him different. And he’s smart, and he’s a hell of a worker. And he’s a great kid. In other words, he checks the big-time talent box, but then he checks all the other boxes. He really is a can’t-miss outstanding player. It’s just a matter of how outstanding he becomes and how it comes along.

His sister was a great player for us. I remember when he was coming to our games. And then when we went to see him, I said, holy mackerel, he’s special. He played for Boo Williams’ team, and he’s special. He was special tonight. There’s no question about it.