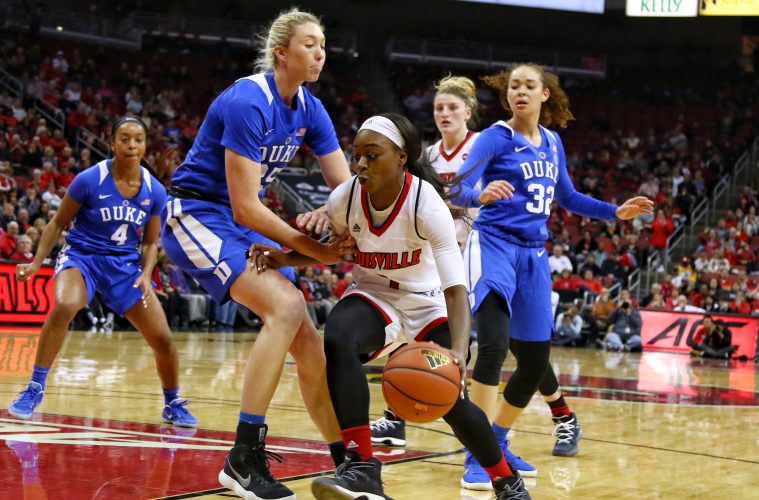 GALLERY: Louisville Basketball Improves to 17-0 With Win Over Duke

Third-ranked Louisville played well in many phases for one half before second-half stumbles on both ends of the floor allowed No. 17 Duke to threaten its unbeaten record. TheCrunchZone.com’s William Caudill was baseline to shoot the game:

The Cardinals didn’t flinch and shut down the Blue Devils when it mattered to continue their best-ever start.

Asia Durr had 22 points and returned from a first-half ankle injury to grab a key rebound late that helped Louisville survive Duke’s fourth-quarter rally for a 66-60 victory on Thursday night.

The Cardinals (17-0, 3-0 Atlantic Coast Conference) appeared in control with a 15-point lead midway through the third quarter. But the Cardinals made just 7 of 26 shots in the second half and broke down defensively, allowing Duke to get within 63-60 on Haley Gorecki’s 3-pointer with 2:54 remaining.

Duke missed its final three shots, and Louisville’s Sam Fuehring made two free throws with 22 seconds left before Durr added the final one six seconds later to seal the win in the Cardinals’ ACC home opener.

”We’re not satisfied,” Fuehring said. ”We’re going to continue to do better. We know there’s a target on our backs.”

Louisville coach Jeff Walz was unhappy with the defensive mistakes that helped Duke get close at the end.

”We allowed wide open shots like we didn’t even guard, and that wasn’t the plan,” he said. ”If you want to try it once to try and psych somebody out, then fine, but when they make it, you might want to guard them after that and we never even made an attempt.”

Durr made 8 of 14 shots but left the game for several minutes in the second quarter after twisting her right ankle. The junior guard returned to score the final three of a 17-point half that paced the Cardinals’ 57-percent shooting and ultimately helped them withstand the Blue Devils’ charge.

Myisha Hines-Allen had 13 points and 10 rebounds and Fuehring had 12 points.

”We had a kick and energy that we came out with and that momentum brought us back,” Gorecki said. ”My teammates kept giving me good looks.”

The crowd of 8,101 was anxious when Durr was carried by Louisville video coordinator LaMont Russell into the locker room after twisting her ankle. The junior jogged back to the bench to cheers and finished out the first half, though she looked gimpy for the rest of the game.

Teammates said they believed their top scorer would return, and Walz tried to lighten up the tense situation.

Duke: After shooting just 35 percent at Miami, the Blue Devils made 24 of 49, including 15 of 21 in the first half (71 percent). But by the time they finally shot a 3 in the second quarter, Louisville had four by then and created a hole for Duke to climb out of. Gorecki’s perimeter shooting and Leaonna Odom’s 14 points helped offset 2-of-12 shooting by leading scorer Lexie Brown (eight points), but Duke missed key shots down the stretch and committed 15 turnovers that led to 21 Cardinal points.

Louisville: The Cardinals had 15 assists in the first half and created good looks. Those shots weren’t falling after halftime, though, especially in the fourth quarter. The defense faltered, too, though Louisville came up with timely rebounds down the stretch and made 13 of 20 free throws. Hines-Allen blamed herself for defensive lapses and noted, ”I’m letting girls shoot shots on the scouting report that were there. I’ve got to stay focused and dialed in.”

Louisville hosts Virginia Tech on Sunday in its final tune-up before hosting No. 2 Notre Dame on Jan. 11.