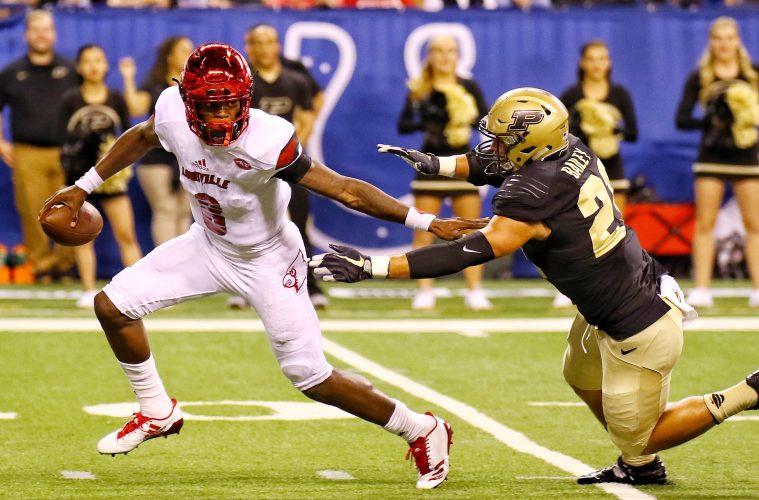 One of the greatest players in University of Louisville and Atlantic Coast Conference history, junior quarterback Lamar Jackson has decided to forgo his final year of collegiate eligibility and declare for the 2018 NFL Draft.

Earning college football’s most coveted award in 2016, Jackson – the youngest player to win the award — rushed for 1,571 yards and 21 touchdowns, while passing for 3,543 yards and 30 touchdowns. He set a school record with 5,114 yards of total offense, while accounting for a league-record 51 touchdowns.

“As I have said before, Lamar is the best player you’re ever going to see,” UofL head coach Bobby Petrino said. “His impact on our university and this community has been immeasurable. And while personal accomplishments have been massive, he has remained such a humble person and has been a terrific teammate who cares more about others and simply winning.

“It’s been such a pleasure to coach him and see his growth as a player. Lamar is the ultimate competitor. His ability to throw the ball, run the ball, there’s been nobody like him and it’ll be awhile before you see anyone like him again. While he is moving on, our relationship does not end here. We will continue to help him in any way we can and embrace every opportunity he has to remain engaged with our university. We all wish him tremendous success.”

Playing in only 38 career games, Jackson broke or shared 42 school and seven conference records, while becoming the only player in ACC history to be named both the player and offensive player of the year in consecutive seasons.

One of the premier dual-threat signal callers in the nation, Jackson became the first non-senior in FBS history to rush for 4,000 yards and pass for 9,000 yards in his career. Jackson also is the only player in FBS history to rush for at least 1,500 yards and pass for at least 3,500 yards in a season – accomplishing it in 2016 and 2017.

The 2016 Maxwell, Associated Press, and Walter Camp Player of the Year honoree, Jackson finished his career with 9,043 passing yards and 69 touchdowns, which ranks fourth and fifth, respectively, in school history. As a runner, Jackson set school records with 4,132 yards and 50 touchdowns.

With his rushing touchdown in the TaxSlayer Bowl loss to Mississippi State, Jackson is the third player in FBS history to record 50 rushing and 50 passing touchdowns, joining Florida’s Tim Tebow and Nevada’s Colin Kaepernick.

A starter in 33 games, Jackson posted a 22-11 record and accounted for a school-best 119 touchdowns, which moved him into second place all-time in the ACC.

The Pompano Beach, Fla. native, Jackson climbed into sixth on the FBS career list for rushing yards by a quarterback. He holds the school record for rushing yards with 4,132, as well as holding the school mark with 13 career 150-yard rushing games and 23 100-yard contests. He owns the top two single-season rushing marks in the school annals, recently breaking his previous mark by running for 1,601 yards in 2017.