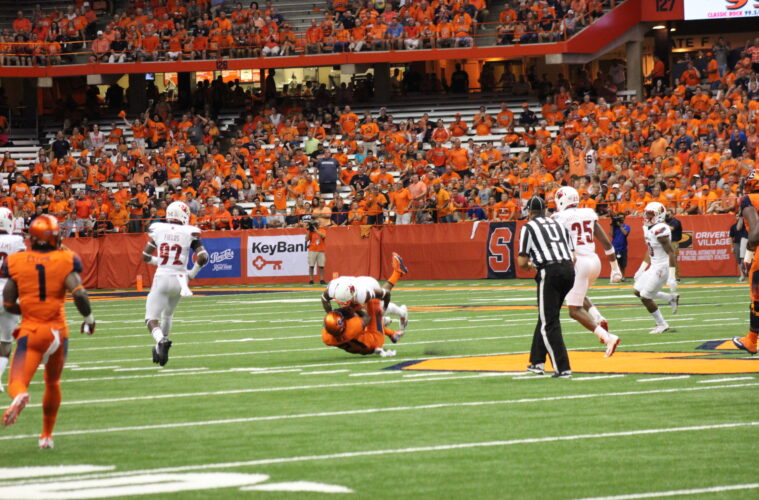 There are strange anomalies that have come about in the past ten years of Louisville Football. They demand answers but they’re never exactly straight forward and we’ll probably never know the exact answer to them.

I wish there was an exact answer but it’s not exactly straight forward. In the last three trips to the Carrier Dome, Louisville has one win. As for the team that got the win? They went 7-6 on the season. The latest loss that Syracuse gave in New York happened in one of Louisville’s best season in school history – 2013. The 2006 Louisville Football team narrowly missed a shot to play in the National Championship game. They only won there by 15, outscoring the Orange 21 to 7 in the second half. Even more disturbing, they were held to 7 points in the first half. That was uncharted territory in Petrinos’ first season. It doesn’t really make sense. The records of the Syracuse teams that have beat them in the Carrier Dome? 8-5, 7-6, and 5-7

I wish I could tell you there was someone kind of trend, like this is only going to happen on a full moon for 7 pm kickoffs. But, there’s just nothing there. Logic has been frowned upon in this series for the most part. You’ll hear some statistics about this game about how they’ll match-up from me and others, but history has shown us statistics are rarely involved or important when these two meet in the Carrier Dome.

It’s not just that Louisville loses. Odd stuff happens along the course of each game. In 2012, Syracuse nearly had two running backs run for 100 yards, that didn’t happen once against Louisville that season. The odd thing about the 2008 loss? Louisville had one offensive touchdown in a season in which they scored 20 or points in nine games. It would make sense if each of these games happened on full moons.

Why does this happen? Nobody seems to know the answer.

The Carrier Dome doesn’t exactly qualify as a ‘hostile environment’. It’ll be loud when Louisville faces them for a Friday night game, but Death Valley and a trip to South Bend certainly present tougher environments. Perhaps it’s that whole ‘dome’ thing that throws Louisville players off. Anytime you haven’t played football a while in certain setting, I’m guessing it’s gonna have some kind of effect on how you play.

Former Louisville tailback Jarrell McGriff-Culver told me that perhaps it’s due to ‘focus’ saying that ‘it’s easy to get distracted in interesting places’. I suppose that would make sense, anybody place in New York certainly does qualify as ‘interesting’.

If a loss occurs, don’t expect that whole focus thing to be the reason for that. On Monday after practice, Bobby Petrino noted that wouldn’t be a problem.

“We don’t worry about looking ahead,” the Head Coach explained. “Our team is very motivated by what happen a few years ago.”

It wouldn’t have mattered what Louisville had done up this point in the season, when Louisville came into this game, it would be one of those that fans worried about. Simply hearing about their Cardinals making the trip to upstate New York has to be nauseating at this point. By now, Louisville fans are perhaps a little bit more worried about this one.

Syracuse hasn’t been great; they eked out a win over a Division II opponent. With that being said, neither was Wake Forest. Now Louisville will quite possibly be taking their freshmen quarterback to Syracuse for his first career road start. They’re also coming off a week in which they committed double-digit penalties. Those type of things are scary going into a road game, particularly in environment that for whatever reason Louisville has struggled in

The saving grace for Louisville is they are more talented than Syracuse, but given this history of this one, that hasn’t really mattered.