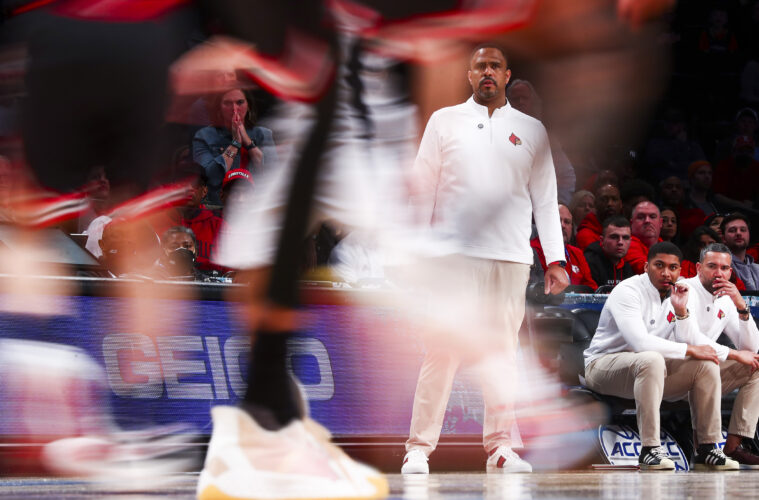 MIKE PEGUES: Just want to say how extremely proud I am of the two guys sitting right next to me, our captains in team 108 for persevering and enduring more than any other team has had to endure all year. All I ever wanted when the transition happened was for our guys to run through the tape, to finish strong, to give it everything they had. And that’s exactly what they did, evidenced by our performance tonight.

Credit to UVA for getting — edging out a close win, but I thought our guys played well enough to win. Unfortunately they were one point better tonight.

I’m an interim coach here, and quite honestly these guys picked me up throughout the whole season when I wasn’t always sure how to help them. We had some rocky times, no doubt, but I won’t remember that as much as I’ll remember these guys standing tall and fighting and persevering in one of the toughest seasons — not just basketball, one of the toughest seasons in life that they’ve had and may ever have. And I want to thank them for that and particularly these two guys right here, and the rest of our guys, as well.

Q. Malik, this is the end of a pretty long chapter of your life. Just wondering what’s going through your mind and your emotions right now.

MALIK WILLIAMS: You know, I don’t really know yet. It hasn’t really set in. You know, I enjoyed Louisville and they made me into a man. I learned a lot, I grew a lot. I’m more than grateful for choosing the University of Louisville in 2017 and sticking with it through all of the tough times and everything that I’ve been through in my career.

This year was one of the toughest for many reasons, but just sticking through it. You know, I’m in a tough spot right now, but at the end of the day, I’m good because I gave it my all and I tried. And it wasn’t the finish that I wanted, but I played my heart out.

Q. Mike, you talked about it before, but how difficult was it to go through just the season and just this transition? Now that it is over, can you really put into words what it was like to go through this?

MIKE PEGUES: Not just yet, to be quite honest. Again, I’m just really happy for our young men. As an assistant coach even you understand the responsibility of supporting your student-athletes and your young men and helping them get something out of every day, you know, giving them everything that you have, that you’ve learned throughout the course of your playing career and coaching career and giving them as many assets as you possibly can. And I had to step up and do that in the role of a head coach, and I know I wasn’t always perfect but I gave it my all, and I’m just grateful to the guys that they hung with me and the staff. I’ve learned so much from our players and our staff and I can only hope to be an even better coach going forward because of that transition and this season.

Q. Mike, they get a lay-up pretty late, there’s a travel — there’s a couple plays. Is it almost harder you guys were so close? It’s a play here or there.

MIKE PEGUES: Yeah, it’s a play here or there. Of course I’m biased and I think that we get hit and we don’t get it, but I’m not going to hang this on the officiating. I thought the officials did a solid job. If you asked me to look at every game, I can give you calls that I thought didn’t go our way.

I’m just more so proud of our guys for competing and hanging right in there. I thought we executed our game plan to a tee. Like if you ever want to know how you go about guarding Virginia’s offense, their blocking move, you watch this game and you take their example. And for that I’m just elated because these guys logged 30-plus minutes yesterday and then they come out tonight and they perform at their very best on the defensive end against a team that makes you play deep into the shot clock.

Our coaching staff challenged these guys to concentrate for 30 seconds every possession, and that’s exactly what they did.

I had a feeling it would be a first of 50 game. They got there a few seconds before we did.

There’s some good young guys in there, and I just hope that they embrace the opportunity and really enjoy what they have.

MALIK WILLIAMS: Yeah, I think he hit it right on the nose, just embracing opportunity. I just mentioned it to him shortly, but just embracing and grinding from day one and enjoying this, taking it moment by moment and just processing, really processing everything that goes on and just all of the things like that.

I will really tell them to take what Jarrod brought for us all year. It probably goes understated what he did for this team. He brought it every day at really tough times. Me and him talked plenty of times throughout this season, and it was difficult for us. For him to come in every day, be that same guy, be the leader that we needed when I was out or all the things that I was going through, Jarrod remained the same guy.

That’s what I would say to anybody in our locker room or anybody in any other locker room. You want a guy like Jarrod West on your team. He’s a great guy off the court, on the court. He has faith in himself and others. This is the people that — this is the type of guy that you need on your team. I would tell anybody to just follow his playbook. Just stay focused, bring it every day, and even when you don’t got it, you’ve got to still bring it to that table.

Q. Mike, you’ve been fully invested in this and for several years. Do you even know what’s next for you? Have you even been able to begin that kind of process?

MIKE PEGUES: I haven’t. Quite honestly I’m not the best multitasker. I had no ambition whatsoever to dive into anything other than steadying the ship and helping these guys and giving them everything I had to try to finish this season the right way. I haven’t taken one second to invest in what’s next for me.

It’s going to be hard to turn the page. It’s going to be really hard, but I have to. We all have to. These guys have to as seniors. They have to finish up strong academically, finish their master’s degrees, their undergraduate degrees. And hopefully throughout their careers, I would like to think they put themselves in great position to advance their lives, whether it be on or off the court.

I know a lot of people in Louisville are proud of these guys and the effort that they put in. And as our coaching staff told everybody in that locker room, we’re here for you whether we’re here or not. We don’t have to be here at Louisville to support these guys in any way, shape, or form.

As far as our staff, I can only hope that we all land on our feet. There’s a lot of good men in that locker room from our strength coach to our academic advisor to our assistant coaches, our support staff. There’s a lot of good people in that locker room that not only do a really good job, they’re really good people. I can only hope that all of us land where we would like to land and have an opportunity to keep doing what we love.