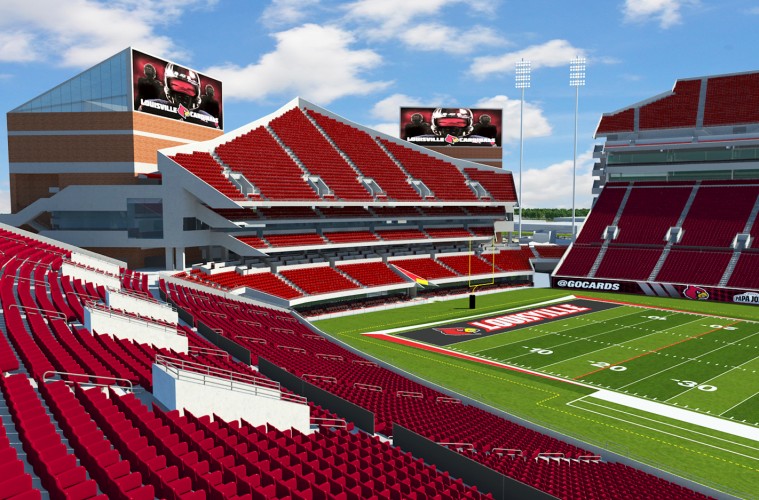 With a capacity of approximately 61,000, Papa John’s Cardinal Stadium is home to University of Louisville Football and hosts a variety of special events, like concerts and auto shows, throughout the year. The three-display network will consist of over 8,000 square feet of LED, including a 23.31’ high by 91.34’ wide 1080 pitch screen located in the South Endzone and two 37.80’ high by 80.00’ wide 720 pitch video screens in the corners of the North Endzone. The main display in the South Endzone will be the 3rd largest display in the ACC. The install will also include 20mm LED ribbon displays in the following locations:

“ANC has been a great partner of the University and was our first choice to help us upgrade our video display at Papa John’s Cardinal Stadium,” said Vince Tyra, UofL Vice President and Director of Athletics. “This new technology will enhance the fan experience within the stadium, helping make every seat the best seat in the house.”

Along with the digital media network, ANC will install a complete audio system to accompany the visual experience at Papa John’s Cardinal Stadium. ANC will also install a new 16mm 20.16’ high by 25.20’ wide video board at UofL’s Bass-Rudd Tennis Center and a new line scoreboard at the Paterson Baseball Field.

For the past three years, ANC has partnered with the University of Louisville on video displays for their soccer, baseball, and softball stadiums. For soccer at Dr. Mark and Cindy Lynn Stadium, ANC installed 12mm SMD APEX LED displays. Lynn Stadium is currently the only NCAA Soccer venue to feature such high resolution. With the 12-year service partnership, ANC will operate these displays on campus during live events, including all University of Louisville home games.

The displays will be seamlessly synchronized by ANC’s award-winning vSOFT™ operating system, which is currently used to manage the displays at Cardinal Park Soccer and Track Stadium.