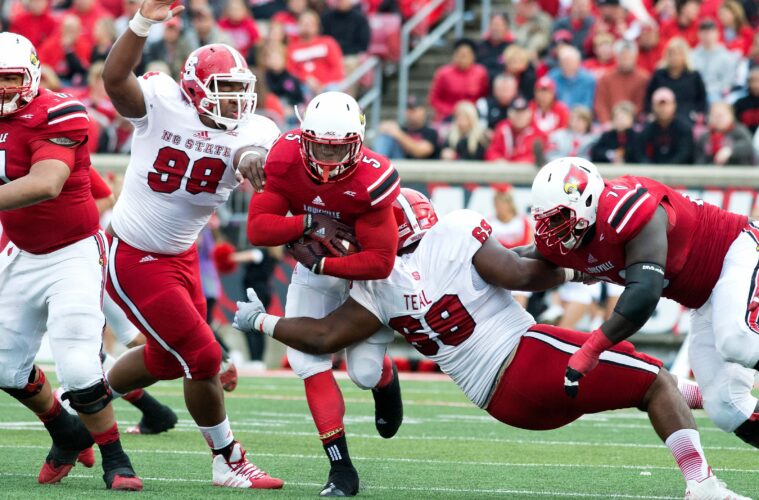 With National Signing Day inching closer and closer, the Louisville football coaching staff has been focused on one major task: upgrading the offensive line talent. Having 4-star Cole Bentley already on campus and 3-star Ronald Rudd already in the fold was a great start to the class but with losing 3 offensive line starters from 2016, including both guards, that wasn’t enough.

That all changed on January 15th when 4-star offensive lineman Caleb Chandler announced he had committed to Louisville.

“It felt like home away from home.” Chandler said, having just concluded his official visit. “The coaching staff, recruits and players made it feel like home even more. [The] team is ready to compete now and for a while now. [I] wanted to be a part of that.”

At 6’4” 293lbs, Chandler was recruited specifically at offensive guard in order to help replace seniors Khalil Hunter and Kiola Mahoni.

“I feel like I bring smartness and great abilities for the oline. Also toughness, finishing blocks and knowing my assignments and not only doing them but trying to be the best.” Chandler stated when asked to describe the attributes he brings to the table.

As far as recruiters, there was no shortage of individuals that worked to land Chandler. While Louisville assistant coaches Chris Klenakis and Lonnie Galloway were Chandler’s main recruiters, current offensive lineman Robbie Bell (who lived 10 minutes away from Chandler back home in Georgia) as well as Louisville commits CJ Avery, Russ Yeast, Malik Cunningham, and Ben Hutch all played a part in the commitment.

Between now and when he arrives on campus Chandler said he will be working on three key things: Maintaining his weight, hitting the gym hard, and learning the playbook.

Caleb Chandler will arrive at Louisville with high expectations, being one of Louisville’s highest rated offensive line recruits in recent memory. While it typically is quite difficult for a true freshman to start on the offensive line, the Louisville coaches made it quite clear what they are expecting of him.

“To be ready as soon as I come in.” Chandler stated.