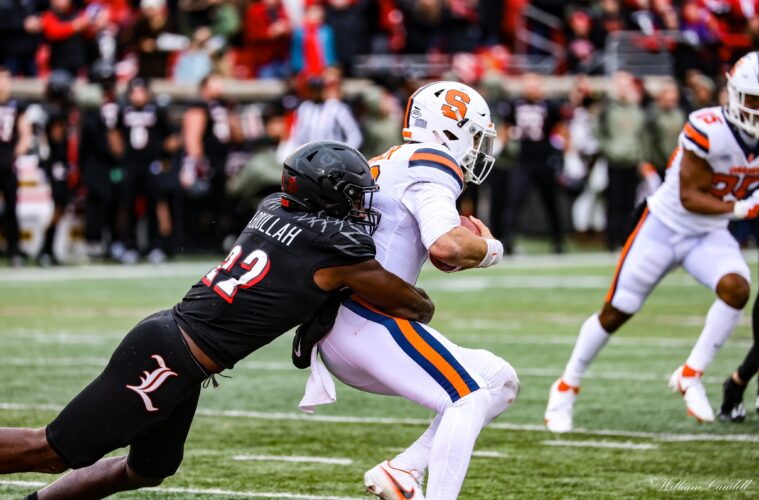 Kam Wilson has struggled with injuries during his time here. But it’s time for Kam to get it done as a former 4-star recruit. Allen Smith came to Louisville after suffering a season-ending injury to end his high school career. Allen was originally committed to North Carolina and chose the Cards over Penn State, Nebraska, Cincinnati and Oregon. The spot behind Abdullah is there for someone to claim. Who is it going to be?

Who We Are Watching: Popeye Williams is someone we’ll be watching closely. Coming from Indianapolis Popeye is the 12th highest rated signee in Louisville Football history (the upcoming 2023 class might move him down!). But Popeye’s body is ready and he finished high school as the #181 player in the country for 2022.

Monty Montgomery was lost for the year in the UCF game (Game 3) of the 2021 season. There were big expectations for Montgomery in 2021 but instead the Cards were forced to go very young at Linebacker for the duration of the season. Now Monty is back and his ability and experience at the MLB spot is gong to be a big lift.

Dorian Jones was lost for the year in 2019 during his true freshman campaign. Last year Dorian compiled 48 tackles and 4 TFLs. This will be his 4th season of college football, yet is still considered a redshirt sophomore. Dorian has a lot of experience playing college football at this point and is a valuable piece.

Who We Are Watching: TJ Quinn added 13 lbs in the offseason. Quinn also redshirted his 2021 season but did check in vs. Duke and logged 2 tackles. TJ is from Valdosta, GA and had offers from VT, Colorado, BC, Illinois, UK, NC State, Syracuse, Wake Forest, Washington State and West Virginia. The linebacking group is full of veterans so it may be another ‘work’ year for Quinn, but he’s one to keep an eye on as young players often burst onto the scene in their 2nd year of college football.

Momo Sanogo comes to Louisville from Ole Miss for this final year of eligibility. Momo was a 4-star recruit out of high school rated as the #13 LB overall. During his sophomore season he was 5th in the SEC in tackles. The landshark was lost for the year in 2019 after just two games with a right ankle injury after being named Preseason ALL-SEC 3rd team. After 210 tackles in the SEC Momo is getting his Masters in Business Administration at UofL and is the presumed starter at Middle Linebacker with Monty Montgomery. Lots of experience here.

KJ Cloyd also brings a lot of experience and athleticism to the linebacking corps in 2021. KJ has been a special teams dynamo during his tenure here and has seen some meaningful snaps as well. The coaching staff kept the redshirt on Jackson Hamilton last year but he did appear in two games. The coaches have consistently praised him for his work during practice. We’ll see how that translates to the field in his redshirt freshman season.

Everyone remembers the Jaylin Alderman INT for a TD during the UCF game in replacement of Monty Montgomery. Alderman has added 11 lbs for the upcoming season after tallying 16 tackles in 2021. Look for an increase here.