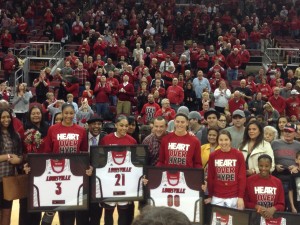 One last time.  One last shoot around, one last pre-game warm-up, one last time to come onto the floor at the KFC Yum! Center.  These were the thoughts that raced through Bria Smith’s mind on a night where she, along with her Senior classmates, had the privilege of playing their final home game in front of 10,488 adoring fans and defeating the Boston College Golden Eagles.  The Cardinals would dispatch the Golden Eagles by a final score of 77-60 as they prepare for Sunday’s showdown with Virginia before moving on to ACC tournament play next week in Greensboro N.C.

While the Cardinals (24-4, 12-3) never trailed in the contest, the hot perimeter shooting of the Golden Eagles (12-16, 4-11) kept the game interesting until the last five minutes or so. With Boston College hitting on 12 of 26 three point attempts, the Cardinals could never get the separation they needed during the first half.

With Senior night fresh on everyone’s mind, it was the Seniors who delivered in a big way.  Bria Smith and Jude Schimmel each had 11, Shawnta’ Dyer scored 13,  Sheronne Vails had 5 and Sara Hammond pitched in 3.  Bria Smith collected 7 steals on the night to move her into 5th place all-time on the steals list, and Jude Schimmel dished out 7 assists on the night.  The Cards were paced by Freshman Mariya Moore who led all scorers with 18 points.

At the end of the evening the players were all asked to describe what they would take away from their experience at U of L and each of them indicated the relationships that they had forged would be the biggest memory for them.  Sara Hammond expressed the overwhelming thought of the night which was one of gratitude.  “We know there are teams we play in conference who won’t have 10,000 fans for their total home attendance.  We have that night in and night out.  We certainly don’t take that for granted.”

Up next for Coach Walz and the Cards is a road trip to Virginia in preparation for the ACC tournament which begins next week in Greensboro N.C.  The Cards figure to be a 3 seed in the tournament, and Coach Walz expects a similar seed when the NCAA pairings are announced.  “I’m never right with these things, but I would think that we would be a 3 seed.”  “Today, our RPI was a 6, so I don’t think that a 3 seed is too optimistic.