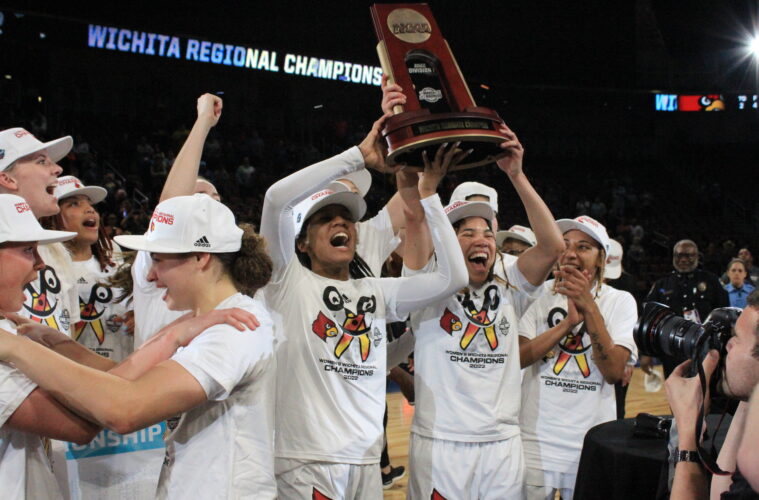 Louisville Women’s Basketball is set to play South Carolina in the Final Four this Friday at 7p.m. est. on ESPN.

The Cards are playing in their fourth Final Four after a 62-50 win over Michigan in the Elite Eight and will be seeking their third ever appearance in a national championship game. After scoring 20 or more points in all four NCAA games so far, Hailey Van Lith was named the Wichita Region Most Outstanding Player. She is the first player from Louisville to do this, surpassing Asia Durr who did it in three games. Emily Engstler was named to the All-Region team after averaging 13.5 points, 11 rebounds, 4.8 steals, 2.5 assists, and 2 blocks in the first four tournament games. She recorded her season high 16 rebounds against Michigan and leads the NCAA tournament with 19 steals. She also ranks second with 8 blocks and third with 44 rebounds. The Cardinals as a team are leading the NCAA Tournament with 54 steals and 21 turnovers forced per game and are allowing just 56 points per game.

They’ll have a tough opponent in South Carolina and Dawn Staley, who was undeniably the best team in the country this season. They have just two losses this season. One coming in overtime at Missouri, and the second coming in the SEC Championship game when Kentucky pulled off the stunner with a last second shot. The Gamecocks lead the NCAA with 7.6 blocks per game and are third with 50.5 rebounds per game. They’re also allowing just 50.5 points per game. Louisville will need to figure out the best way to neutralize All-American Aliyah Boston, who leads the team with 16.8 points per game and is leading the country with 28 double-doubles. The Gamecocks also have stars in Destanni Henderson who is averaging 11.1 points per game, and Zia Cooke who averages 10.7 points per game. Needless to say, this will be a battle for both Louisville and South Carolina. The Cards will need to utilize their strong defensive efforts and stay consistent with good shot selection. We’ll need to see 110% effort from everyone wearing a Louisville jersey that night.

I believe if we can get another 20 point game from Hailey Van Lith, along with a 15 point game from sharp shooter Kianna Smith and ruthless defensive plays from Emily Engstler and Mykasa Robinson, the Cards have a very high chance of coming away with a win Friday night. Another key to success will come in the form of staying out of foul trouble early. We saw what this does to Louisville when Olivia Cochran was on the bench with two early fouls against Michigan and it will be imperative to keep everyone away from those issues when facing a talent such as Aliyah Boston.

The game will be aired on ESPN at 7p.m. EST. Directly following the game, be sure to tune into 93.9 The Ville for the women’s basketball post game show with myself and Dave Scull. Let’s cut down another net!