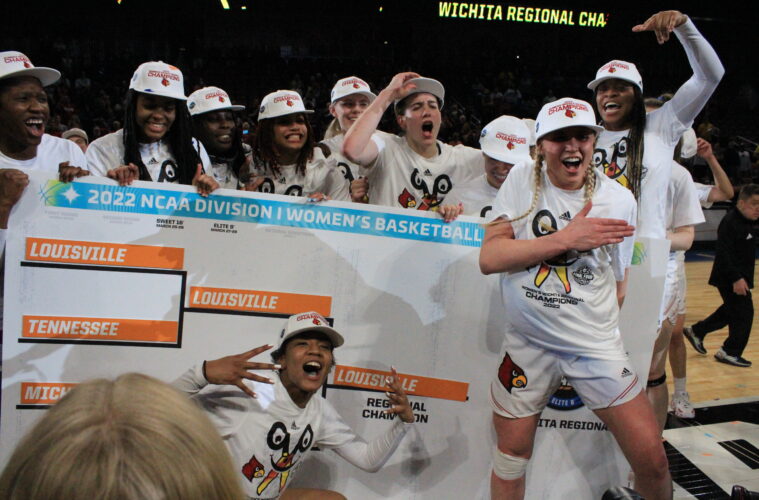 Jeff Walz leaned back alongside Louisville star Hailey Van Lith with his eyes closed, white cap emblazoned with ”Wichita Regional Champions” flipped backward on his head and a freshly cut- down net hanging around his neck.

It was the very picture of reveling in victory.

Van Lith poured in 22 points to earn regional MVP honors, Olivia Cochran made a series of crucial baskets in the final minutes, and Walz’s gutsy bunch of Cardinals answered every body blow from Michigan in a physical 62-50 victory on Monday night that has them playing in the Final Four for the fourth time in program history.

”He’s (Walz) meant the world to me personally,” said Emily Engstler, who offset a poor night shooting with 16 rebounds and some big defensive plays. ”He lets you be yourself and he protects you and you can trust him, and that’s hard in this industry.

”I’m going to do whatever I can to get him a national championship.”

First up is fellow No. 1 seed South Carolina on Friday night in Minneapolis.

”I treat these kids as my own,” Walz said. ”I love all of them and I’m just so excited for every single one of them.”

The No. 3 seed Wolverines were within 52-50 with less than 3 minutes to go when the Cardinals, using some nifty ball movement to get out of a half-court trap, found Cochran for a layup. Then at the other end, Michigan star Naz Hillmon was called for charging, and Cochran added another bucket to give Louisville some breathing room.

The Cardinals (29-4) finished off their second win over the Wolverines this season from the foul line.

Hillmon finished with 18 points and 11 rebounds for the Wolverines (25-7), who held their first three tourney opponents under 50 points to reach their first regional final, but were unable to hold down the Cardinals for the full 40 minutes.

”That was stinky: 52-50 with the ball. I’m going to have nightmares about that for the next eight months until we play again,” Michigan coach Kim Barnes Arico said. ”Louisville is a great team. We knew it would be a game of runs.”

The start actually resembled the teams’ lopsided matchup in the Big Ten-ACC Challenge – much to the Wolverines’ chagrin – as they missed their first eight shots and allowed a pro-Louisville crowd to get energized.

Unlike that regular-season game, in which the Cardinals unspooled a 25-2 run spanning the first two quarters and cruised to a 70-48 victory, the Maize and Blue decided to put up a fight with the Final Four at stake.

”We said that game was a teaching moment for us. That’s exactly what it was,” Hillmon said. ”We were thankful that game happened so we could make so many adjustments and turn our team over after that.”

So rather than wilt Monday night, Maddie Nolen came off the bench to drop two 3-pointers. Hillmon went to work inside, getting easy buckets when she wasn’t getting fouled. And talented freshman Laila Phelia, who perhaps best epitomizes the direction of a program on the rise, managed to shake her defender for a couple of easy baskets.

”The biggest thing we wanted to do was really try to execute and not turn the ball over,” Hillmon said. ”They did a really good job of trapping at random points, putting a lot of pressure on ballhandlers.”

Ah, but the turnovers.

They soon became a problem for the Wolverines – hardly surprising given Louisville had forced more than 20 a game in the tournament. So while the Wolverines were stingy in the half court defensively, the Cardinals capitalized on 11 turnovers with 14 points in transition, helping Walz’s crew take a 30-27 lead into the break.

Michigan wound up with 22 turnovers, along with some atrocious 3-point shooting, but hung around thanks to a massive disparity at the foul line. The Wolverines were 15 of 20 on their free throws while the Cardinals had shot just five total until Michigan had to send them there four more times in the final minutes.

”Our defense was outstanding,” Barnes Arico said. ”They did what they do best. They forced us into some turnovers which resulted in some easy points for them. But a great basketball game, really proud of the effort our team gave.”

Michigan has made big strides under Barnes Arico, reaching the Sweet 16 last season and getting within one win of its first Final Four this season. Young players such as Phelia show there is much more to come in Ann Arbor, too.

Louisville has never won a national championship despite becoming a perennial contender under Walz over the past 15 seasons. The Cardinals get another shot to finally cut down the nets.