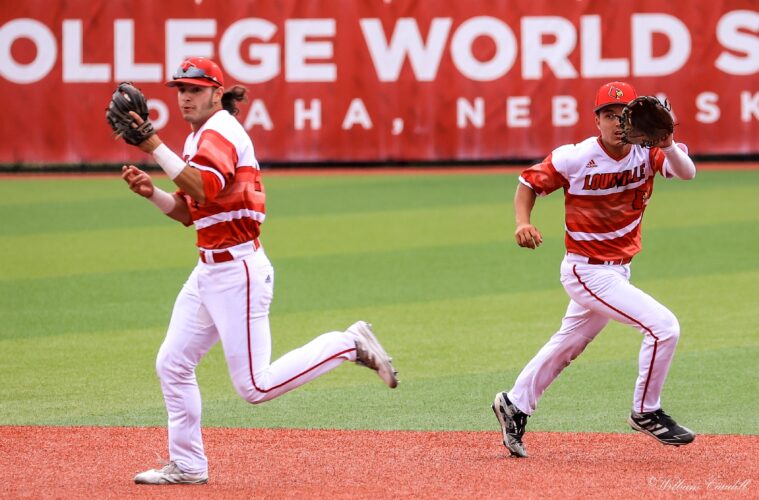 The 2022 season came to a close Saturday for the University of Louisville baseball team after a 4-3 loss against No. 3 Texas A&M in the Super Regional round of the NCAA Championship.

The Cardinals got off to a quick start on Saturday, getting a scoreless first from Riley Phillips before the offense got rolling.

Christian Knapczyk opened up the bottom of the inning with a double into the left field corner and Dalton Rushing launched his 23rd home run of the season over the bleachers and out of the ballpark in right field.

Phillips struck out three in the second, but ran into trouble in the third. Two singles and a walk loaded up the bases and a walk and sacrifice fly pushed across the tying runs. However, Phillips limited the damage to just two and kept the game tied.

Louisville missed a scoring chance in its half of the third, leaving the bases loaded, but cashed in its next opportunity in the fifth. With runners on the corners and two outs, Jack Payton singled back through the middle to score Ben Metzinger to push the Cards back in front.

The lead was short-lived though, as Texas A&M (42-18) homered on the first pitch of the sixth to knot the game up at three.

The Aggies then grabbed their first lead of the day in the seventh, with a sacrifice fly giving them a 4-3 advantage that would prove to be the difference in the game.

Louisville got the leadoff batter on in each of the final three innings, but was unable to get the tying run across. The Cardinals outhit the Aggies 13-5 on the afternoon, but left 10 runners on base.

Knapczyk was 4-for-5 to lead Louisville’s offense. Metzinger and Rushing each tallied a pair of hits.