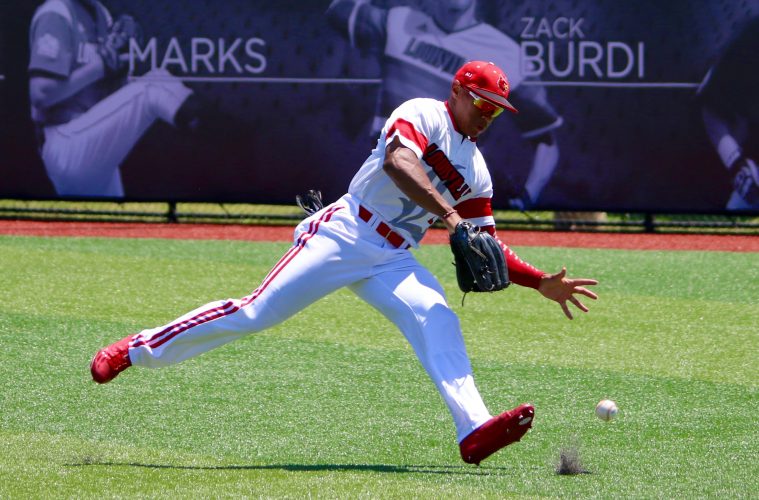 Sophomore Blake Tiberi homered and drove in two runs but it was not enough as the No. 2 national seed Louisville baseball team lost 4-2 to No. 13 UC Santa Barbara in Saturday’s NCAA Super Regional opener at Jim Patterson Stadium.

The loss was just the second of the season at home for the Cardinals (50-13) ending their 22-game winning streak at Patterson Stadium, where they are 36-2 overall in 2016. The only previous home loss for Louisville came in a 6-3 series-opening defeat against Virginia onMarch 25, which the Cardinals followed with wins of 11-4 and 15-0.

The Gauchos (41-18-1) improved to 4-0 in the NCAA Championship with Saturday’s triumph and moved within one victory of the program’s first College World Series berth. Game two of the best-of-three NCAA Super Regional is set for Sunday at noon ET on either ESPN2 or ESPNU.

Tiberi served as a bright spot on an otherwise tough day for the Cardinals at the plate finishing 2-for-4 overall with his 10th home run of the season. The Taylor Mill, Kentucky native produced his 28th multiple hit game and 15th multiple RBI game of the season ranking him second on the team in both categories. Sophomore shortstop Devin Hairston added two hits, including a double, and scored once, while junior catcher Will Smith chipped in with a pair of hits.

On the mound, sophomore lefthander Brendan McKay suffered the first home loss of his two-year collegiate career allowing four runs on nine hits with nine strikeouts in eight innings. Hailing from Darlington, Pennsylvania, McKay dropped to 16-1 at Patterson Stadium and moved to 12-4 overall this season.

The Cardinals struck first on Saturday after Tiberi connected for his 14th career home run to lead off the second inning. Tiberi sent a 1-2 offering from UCSB righthander Shane Bieber into the trees beyond the right field wall for the early 1-0 lead.

Moments later, the Gauchos evened the score at 1-1 in the third inning on a two-out RBI double by Clay Fisher. Ryan Clark started things for UCSB with a one-out single to left center and moved to second on a groundout before scoring on Fisher’s blooper down the right field line.

Louisville faced its first deficit of the NCAA Championship in the fourth inning after UCSB scored a pair of runs on three hits against McKay. Austin Bush led off the inning with his 11th home run of the season before Kyle Plantier added a RBI double to score JJ Muno for the 3-1 lead.

UCSB added to the advantage in the fifth inning on a two-out RBI single by Muno. Devon Gradford started the scoring chance with a two-out single through the left side and moved to second on a single by Bush before Muno drove him home with a single up the middle for the 4-1 advantage.

The Cardinals cut into the deficit in the sixth inning on a RBI single to center from Tiberi to score Hairston, who connected for a two-out double to left before scoring Tiberi’s second RBI of the day. But that was as close as Louisville would get as Bieber and lefty reliever Kyle Nelson kept the Cardinals off the scoreboard over the final three innings.

Bieber moved to 12-3 on the season after allowing just two runs on eight hits with seven strikeouts and one walk in seven innings. Nelson followed with two innings of no-hit, shutout relief to earn his ninth save of the season.