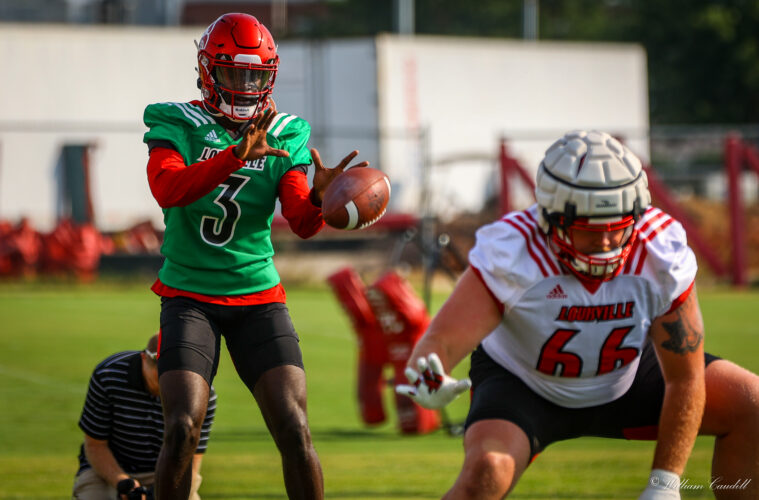 The University of Louisville football team conducted its second scrimmage of fall camp on Saturday afternoon, with head coach Scott Satterfield putting the team through 98 plays on Saturday morning.

The Cardinals scrimmaged for just over two hours in Cardinals with Satterfield seeing major improvements on both sides of the football compared to the first team scrimmage last Saturday.

During the last scrimmage, Satterfield praised the defense for their ability to limit the Cardinals offensively.

Despite being only six days into the fall camp, the defense held the upper hand in a 144-play scrimmage last Saturday. The offense was halted for most of the scrimmage until the offense came on late during practice.

Thankfully this time, the Cardinals’ third-year head coach spread the praise evenly to each side of the football.

“I thought they did much better today,” Satterfield said. “The offense, on the first drive, took it down and scored a touchdown. I think it was a seven or eight play drive on the first drive there to get that in there.”

“Throughout the scrimmage I thought they did some really good stuff. I thought [Malik] Cunningham played really well today. His decision-making was good, got rid of the football and made some big plays. So, I thought it was probably more of a well-balanced scrimmage when you look at it from that perspective, offense and defense, although it’s hard to really say.”

Satterfield put a number of players in orange non-contact jerseys to limit players being taken to the ground to avoid injury. Most of the starting offensive skilled players participated in orange jerseys, but the head coach wanted to see more of the second and third-team units.

Satterfield singled out freshman running back Trevion Cooley, who joined the Cardinals in-time for spring football, but he was limited due to an injury. The native of Knightdale, N.C. took a majority of the carries on the first drive and led the offense to a touchdown.

“Trevion did some really good things for us,” Satterfield said. “He’s coming on strong. He will be a contributor for us. His vision has been good, protected well and has caught the ball.”

The Cardinals lost production in the wide receiver room and are going to rely on some newcomers to strengthen that unit. Satterfield has enjoyed watching the development of Jaelin Carter a transfer from Eastern Kentucky.

“We have confidence in several of the frontline guys,” Satterfield said. “He’s come on strong over the last two days. He had a good day yesterday and came on again today. He’s a big, strong physical player who will be able to help us.”

“He just got here,” Satterfield said. “He’s got great size. He has a mature body and he’s fast. He also practices fast. He will be in the mix for us this season. He’s got a lot of ability.”