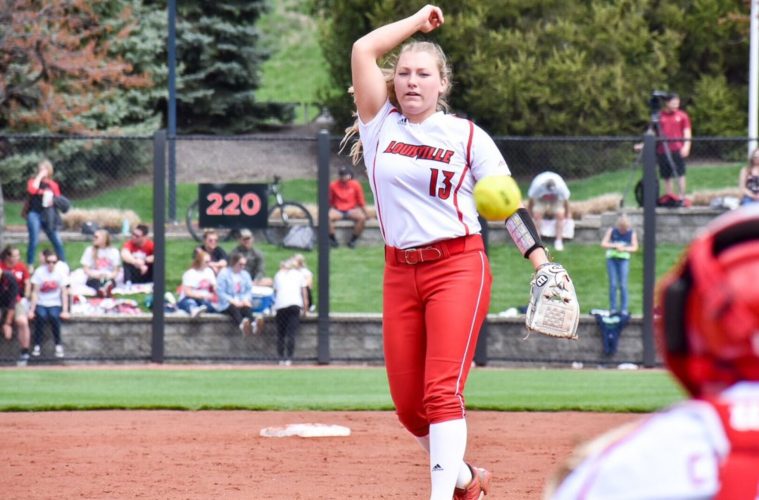 Weather forecast would move this 3 day/game series into a double header for Saturday and a Monday finale. An announced attendance of 818, a large portion Seminole fans… but a great day for some college softball! Louisville had an impressive showing on the day vs the defending national champs!

Game 1 vs FSU – W 2-0
Sophomore Danielle Watson got the start in the circle for Louisville and boy, did she deliver!! After 4 straight balls to start the game.. she allowed just 1 hit and struck out 7 batters in the shutout against the #3 ranked Seminoles. Its the first shut out of the season for FSU.
Celene Funke would take a 1-2 count to get a hit just over the 2nd baseman’s reach for the early single for the Cards. Melton followed with a hit up the middle but was called out for being out of the box. With Megan Hensley at the plate, Funke stole second but it would be an easy trot home for her as Hensley punched one over the center field fence to score the only pair of runs in the game. Overall the Cards had 4 hits on FSU’s combined pitching effort between senior Meghan King and sophomore Kathryn Sandercock.
UofL spent the final 5.5 innings defending their lead. Watson struck out 3 in the T2, the ball didn’t leave the infield in a 3 up-3 down out count in both the T3, T4 and almost the T5 where 1 walk was allowed with 2 outs before putting out the 3rd. T6 was 3 up-3 down and 3 outs were achieved in 4 batters faced in the T7 to seal the victory. A HUGE win for the program.

Game 2 vs FSU –  L 1-4
Senior Megan Hensley would start in the circle in game 2. The Seminoles capitalized on a defensive error at second base in the T2 that would’ve ended the inning and offensive momentum for FSU. A toss from Caitlin Ferguson at SS to Maddy Newman at 2B was in the glove and dropped as she made the huge stretch, but it put 2 on base. Following the error, a wild pitch moves both into scoring position and 2 walks would plate a run for the Seminoles. Two RBI doubles in the T3 would plate 2 runs for FSU to extend the lead 3-0. With one out, Coach Aprile called for both a pitching and catching change. Roby in for Hensley and Cousineau in for Chung.
A wise fielders choice in the T5 would plate another run for FSU but overall, the defense was overall impressive in the double header. Both teams finished with an error in the game.
The Cards would not be shut out in front of the home crowd as fans wondered if the team had a comeback available in the arsenal. Sidney Melton lead off the B6 with a triple. She tagged up on SAC-Fly by Cousineau in RF territory for the only run in the game for UofL. The fans again hopeful in the B7 when Charley Butler tripled with just 1 out but she would be left stranded. UofL left 6 runners on base in game 2.

The series finale wraps up on Monday night at Ulmer Stadium. First pitch is slated for 7 P.M., admission is free and can also be seen on ESPNU.