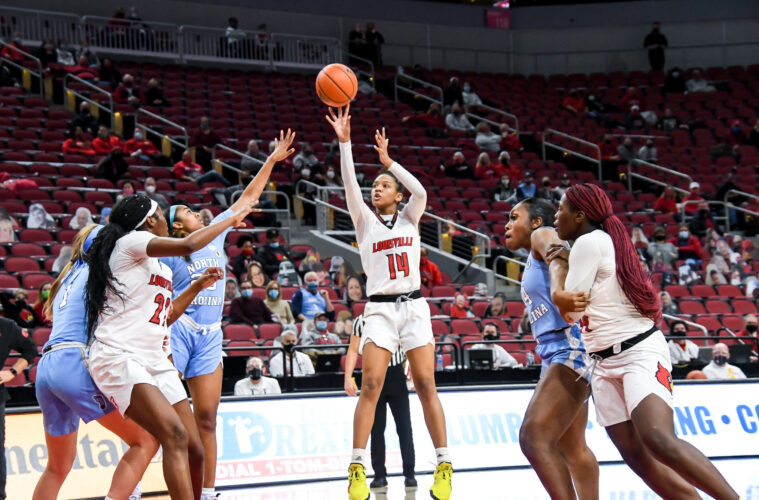 No. 1 Louisville Women’s Basketball Gets A Win Over UNC

The top ranked Louisville Cardinals sent the North Carolina Tarheels home with a loss this evening in a 79-68 win.

Dana Evans got the night started off with a three-pointer and the team did not slow down from there. Louisville went 8-14 from the three-point line during the first half, with the last three-point shot coming from Olivia Cochran at the halftime buzzer. By this point, the Cards had four players already in double-digit scoring with Cochran leading the team at 14 and they continued to play a complete game.

As a team, Louisville did better on the glass and were able to go almost one for one on rebound with North Carolina. Kianna Smith found her way out of a slump and showed up with energy tonight which led to 13 points and 4 rebounds for the night. In the fourth quarter, Louisville effectively stopped playing and North Carolina went on a 17-0 run to cut the deficit to 11. We also saw the Cards get 4 of their 6 total turnovers during the fourth quarter. Regardless of giving up 17 straight points during the last quarter, the Cards were still shooting 46.9% for the night and 46.2% from the three-point line. They got 28 of their points in the paint and 18 points off North Carolina turnovers.

Six players ended the night in double-digit scoring with Olivia Cochran leading the way by recording 17 points. Kianna Smith, Dana Evans, and Elizabeth Dixon each had 13 points while Elizabeth Balogun tallied 10 points and Hailey Van Lith ended the night with 11. This is the second time this season Louisville has ended a game with six players in double figures. Olivia Cochran and Elizabeth Balogun led the team in rebounds tonight with 7 each and Balogun also added 5 assists to her stat line.

In the post-game press conference, Olivia Cochran said the mood on the court was intense during the fourth quarter. She knew they needed to get stops and defend the ball. When asked about her confidence going into halftime, Olivia credited Dana Evans for her confidence in hitting her first career three pointer.

Kianna Smith said that she thinks NC State is talented at every position and after their loss today, she knows they will be ready to play on Monday. Kianna also said they are excited to play on Big Monday and there is some extra emotion going into that game. She noted that they were successful tonight because the team was focused and they know they need to come out and throw the first punch in every game.

The Cardinals finally get a day off tomorrow and will spend the weekend preparing for No. 2 NC State, who will be visiting the Yum! Center on Monday, February 1st. The game is set for a 7:00p.m. tip-off and will be on ESPN2.