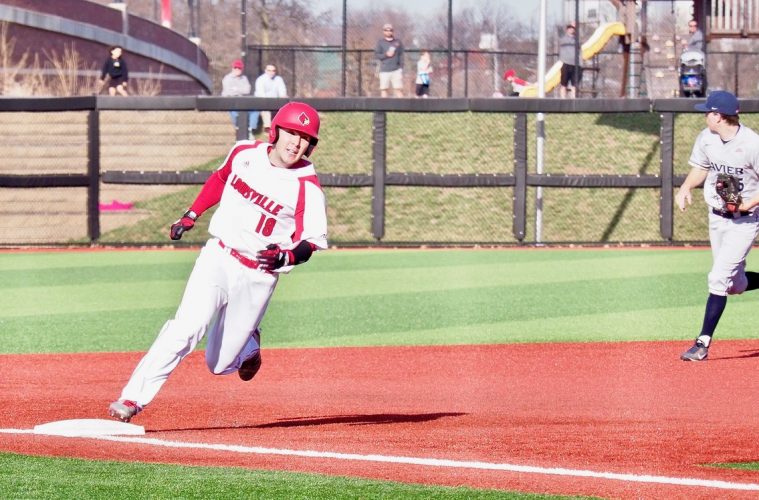 Traveling to Lexington for the road portion of the Battle of the Bluegrass, the #11 Louisville Cardinals fell to in-state rival #9 Kentucky Wildcats after a quick start was not enough to over come a sluggish ending. Despite combining for 13 runs, the game was marred by less than stellar defense at times as both teams combined for 8 errors.

Facing an offensive powerhouse like Kentucky, it’s crucial to get off on the right foot if you have any hope of outscoring them. The Cardinal Nine did just that, plating 3 runs in the first two innings. Sophomore first baseman Logan Wyatt grounded into a run in the first, and Josh Stowers delivered a 2 RBI single with the bases juiced in the second.

After Wyatt’s lone run in the first, the Wildcats quickly responded with two runs of their own in the bottom of the first. Then when Stowers’ 2 runs gave Louisville the lead again in the top of the second, Kentucky decided it wanted to put a strangle hold on the lead. Starting pitcher junior Riley Thompson was knocked out of the game after giving up back-to-back leadoff walks, then a HBP on behalf of junior right-hander Bryan Hoeing set up a bases loaded situation for the Cats. A single and back-to-back throwing errors would allow Kentucky to plate 3 more runs and push their lead to 5-3 after just two innings.

The Cards tried their best cutting into the early deficit, thanks to a groundout RBI on behalf of sophomore Jake Snider in the fourth inning, but Kentucky responded even swifter. They’d match Snider with a run of their own in the bottom of the fourth, then plated 2 more runs in the fifth to have a 4 run lead, their largest of the game.

In the later innings, Louisville had plenty of opportunities to close the gap on the Cats, but could not deliver. The Cardinal Nine found themselves with the bases loaded and only one out in the seventh inning, but only found themselves bringing home one run thanks to a fielders choice RBI by freshman catcher Zach Britton. Despite the bullpen putting up zeros in the sixth, seventh and eighth innings, Louisville’s bats found themselves generating very little offense late in the game. They struck out in 3 of their 6 final at-bats, forcing the 8-5 deficit to hold.