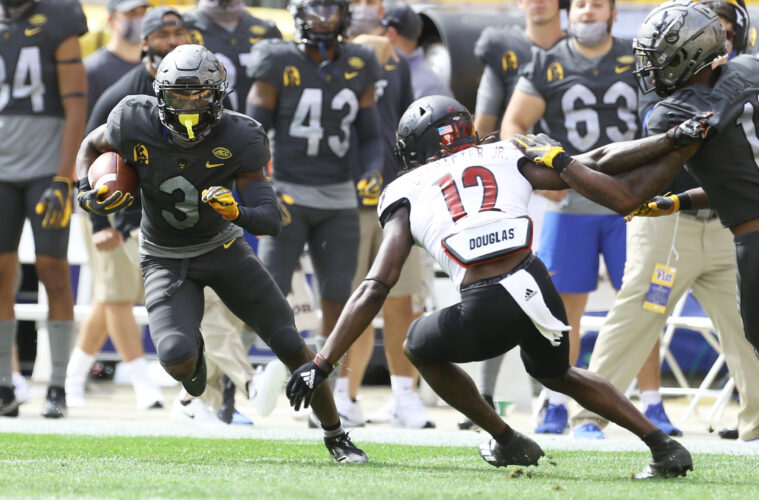 It Didn’t Start Well At All

Things did not start well for the Louisville Cardinals. In the 1st quarter the Cards were caught off guard by the Pitt hurry-up offense and were able to drive the field for a 8-play, 48 yard drive that was capped by a field goal.

An offensive pass interference call on Dez Fitzpatrick killed UofL’s opening drive and a short & shallow punt allowed Pitt to return the ball to the 25-yard line and set up an easy FG score.

From there, Louisville was getting beat up front regularly and despite a much better Logan Lupo punt, Pitt was able to drive the ball on a 12-play, 60 yard TD drive.

Louisville finally got on the board with a 1-play, 75-yard strike from Javian Hawkins. But despite that one play by the Cards the 1st quarter belonged to the Panthers…..and then Louisville added 10 more points in the 2nd quarter with a 38-yard field goal from James Turner and a Tutu Atwell 21-yard TD.

This was by far and away the most successful offensive part of the game for the Cards.

It was 4th down with 3:11 to go before halftime and Louisville had given up a 1st down. Yasir Abdullah was there to make the tackle on Pitt’s Taysir Mack. While bringing Mack to the ground Abdullah’s leg kept Mack upright and spun Taysir up and Mack kept running to the endzone. There was no whistle and Mack did not touch the ground after the officials reviewed the play. Perhaps Pitt scores later in the drive, but UofL didn’t make them earn it there. Must play to the whistle.

Louisville was 1 of 9 on 3rd Down conversions. It really started in the earlier downs as Louisville gave up 12 TFLs… and it finished on 3rd downs with the Cards giving up 7 sacks today at Heinz Field. That’s 5 consecutive games for Louisville allowing 10+ TFLs per game…. a school record.

The 2nd half did not have a lot of scoring with just a field goal on either side. But it wasn’t uneventful. Louisville had 3 great chances to score with Tutu Atwell but settled with a field goal with less than 2 minutes to play in the 3rd quarter. Malik Cunningham overthrew Tutu on one play, underthrew Tutu on another and then finally Tutu dropped a touchdown in the back of the endzone before crashing into the empty Heinz Field stands.

Later Louisville would give an INT back to Pittsburgh immediately after a CJ Avery INT was returned to mid-field.

Never Made the Pitt Pressure Pay

There was A TON of space in the secondary for Louisville’s wide receivers to make plays. Pitt was daring Malik Cunningham to connect on a long pass play to Tutu Atwell, Braden Smith, Dez Fitzpatrick even Ean Pfiefer. But they never did. Cunningham was off today as he was under siege throughout the game. Louisville probably opens things up considerably if they could have gotten even the short to intermediate passing game going.

Pitt played a daredevil defense that should give up more than it did today, BUT, Louisville never capitalized. Tip of the cap to Pitt and Louisville has to go to work to find answers that they really haven’t had in two weeks.

Sum It All Up

When you add up all the mistakes, Pitt living in the backfield, the turnovers, the lack of a running game, not winning the field position, bad on 3rd down offensively and defensively, not hitting the open opportunities downfield…… Louisville still had the ball with time on the clock and the chance to lead or tie deep into the 4th quarter. It was there for Louisville…. Pitt’s defense just wouldn’t allow it.